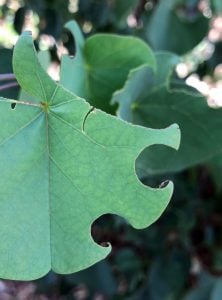 It’s every bumblebee’s nightmare: it is spring, and you are finally out and about, but the neighborhood plants are not yet in flower and you are getting hungry. What do you do? Intentionally damage plant leaves (by biting them) in order to induce flower production sooner. This was the finding of a European team that noticed this behavior in the wild and then tested it by offering some not-yet-flowering tomato and mustard plants to pollen-starved bumblebees. Amazingly, the damaged plants set flowers seven days sooner, but only if the damage had been made by a bumblebee—nothing happened to plants where the analogous damage was made by a human. The details of the mechanism by which this early flowering is induced remain unknown. The results suggest that insects play a much more active role in managing their pollen sources than was thought. Such pollen management might prove critically helpful to the insects under climate change: as warming speeds up insect emergence in the spring, they might emerge only to find that the plants have not yet begun to flower. Flower timing is usually set by day length, which remains unaffected by climate change. The study confirms that the same behaviors are seen in other bee species. Stay tuned for the elucidation of the flower-inducing mechanism! 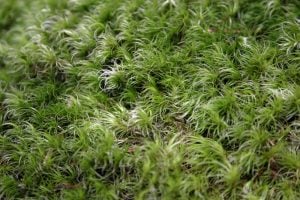 Close up of moss plants. Photo: “Swirly moss” by WoodsPeople is licensed under CC BY 2.0

Fill in the blank: The ability to move water up a stem through a specialized tissue and deliver it in a controlled manner to desiccation-tolerant leaves is one of the major milestones in the development of plants on Earth, and first occurred in __________. If your answer was “vascular plants, of course!” and involved thoughts like “xylem,” “leaf stomates and stomatal closure,” and “leaf cuticle that prevents water loss,” then this paper is for you. The main finding is that bryophytes (mosses) got there first—almost. Using scanning electron microscopy, the authors show that a common tallish moss, Polytrichum commune, has rigid water-conducting tissue (hydroids) as well as the ability to reduce its transpiration by changing the shape of its leaves (curling them up) when the surrounding atmosphere gets dry. In combination, those traits enable the moss to “maintain steady-state photosynthesis under a wide range of humidity without incurring cavitation (formation of vapor pockets) in the water transport system.” Just like their big relatives, the vascular plants, cool! But there are a couple of important differences that seem to explain the reason for mosses being restricted to moist locales: mosses were found to be very water-inefficient (they need to move lots of water to obtain relatively little photosynthate), and in addition were found to desiccate easily (which shuts down photosynthesis altogether). So, although they seem to have developed some of the same critical adaptations to life on land as vascular plants—namely water-conducting tissues that can withstand water tension and the leaves that can regulate water movement in that conducting tissue—they lack other features cuticle, stomata, high water-use efficiency) and remain in the shadow of their larger cousins. 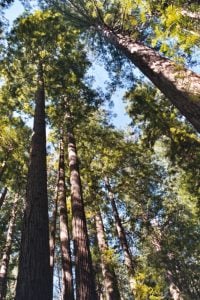 Redwood Trees are some of the tallest on Earth. Photo: “Trees2” by C_h_a_r_l_e_s is licensed under CC BY-NC 2.0

If you are a tree (or any woody plant), growing tall is a good idea—you get to out-compete your neighbors—that comes with a few challenges, chiefly water transport problems. It is important to get water into those leaves up high, but a highly-efficient xylem (one which conducts water quickly) is also more prone to embolisms (or “cavitation”), a situation in which the water column in the xylem breaks and water transport stops. So, what do tall plants do? Do they mainly use xylem that is less-efficient in conducting water and also safer (less prone to embolisms), or do they risk embolisms in order to have a highly-efficient xylem? The answer seems to be the latter, but —as this paper shows —the matter is complicated by factors such as plant life form and taxonomy (shrub, tree, broadleaf, conifer, etc.) and even more so by the range of water availability in different environments. Taller plants were found to have more efficient xylem (good) but also xylem that is more vulnerable to an embolism (bad), and, unsurprisingly, they are found in wetter environments. Thus, looking across species and biomes, the ability to transport water to the top of the plant seems to be one of the key factors limiting the ultimate plant height. This comprehensive analysis also includes a number of other interesting findings, but one stands out: Angiosperms as a group seem to exhibit a larger range of traits than Gymnosperms, i.e., broadleaf plants might have a somewhat greater capacity to adapt to different habitats and water availability regimes compared to their conifer relatives. This is of potential horticultural significance, with climate change-induced warming and the ever more limited water availability in the Western U.S.