I can chart the progression of my life by Calochortus.

For the last two decades, at least. As a teenage girl growing up in San Luis Obispo County, I wasn’t yet brave enough to hike alone. Instead, the first time I saw a patch, I was a student loping along a deer trail on the University of California, Santa Cruz campus. I bent down to examine my floral find—probably Tolmie’s star-tulip (Calochortus tolmiei)—instantly taken by this jewel growing only a few inches above the duff. Though “Calochortus” translates to “beautiful grass,” this plant was certainly no Poaceae, the true grasses known for their inconspicuous, wind-pollinated flowers. No, this species announced itself with the confidence of a gorgeous woman walking into a party. The blanket of mauve hairs, cobalt center, and trinity of petals all conspired into one of the most psychedelic displays by nature I had seen in my young life. 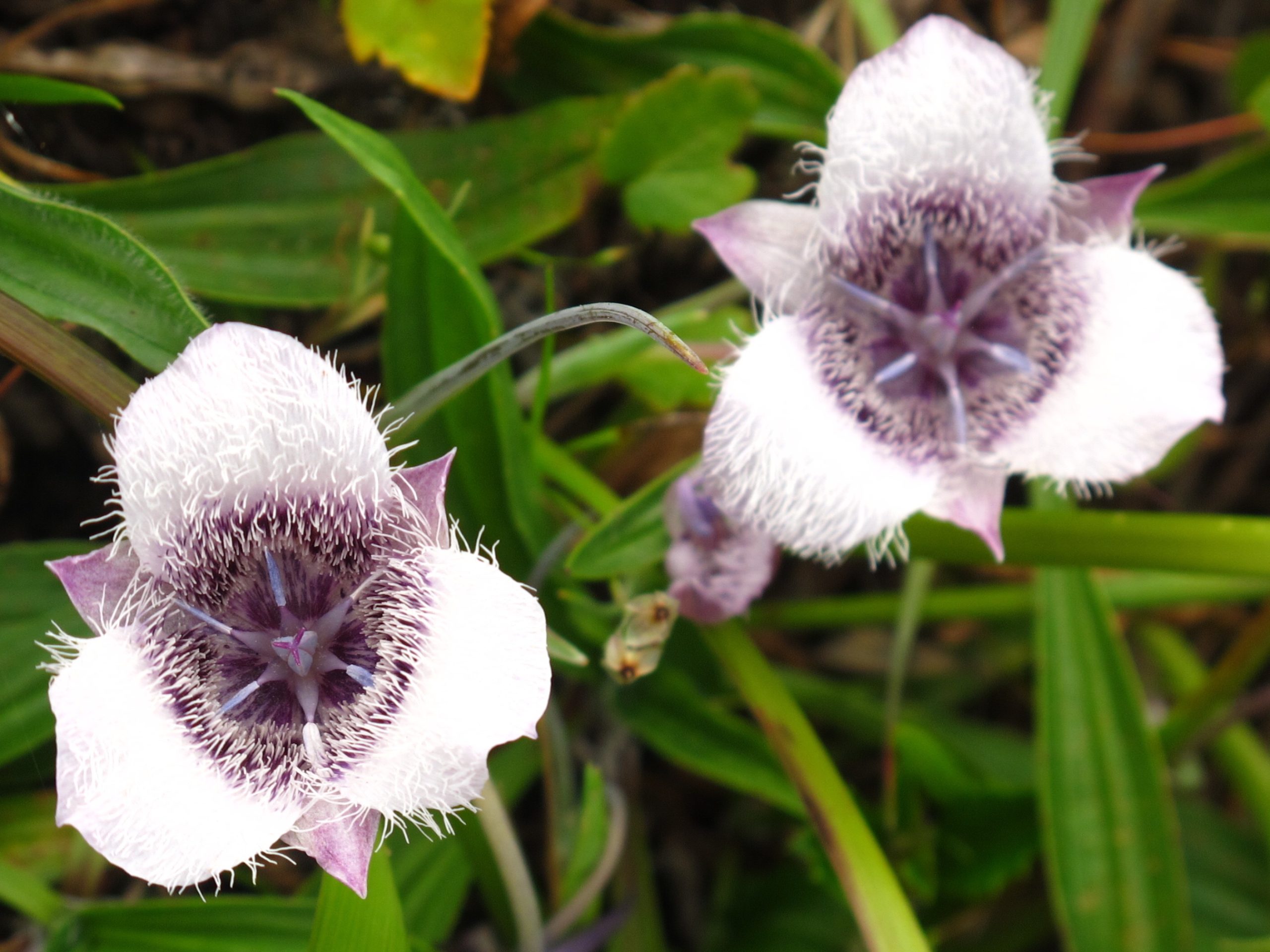 Fast forward a decade to early spring in Pinnacles National Park. My best friend and I went hiking for the day, bolstered by our expanding knowledge from our plant identification class and the April sunshine. What should have taken about three hours—it was only a five-mile loop, and we were both barely 30 years old—took twice that as it transformed into a photo shoot of dozens of different wildflowers. We spent most of that excursion crouched down, playing with petals, and getting better acquainted with our cameras’ macro settings. That loop began and ended with a swath of butterfly mariposa (Calochortus venustus), three-inch-long art nouveau lampshades poking through the golden blades of invasive annual grasses. I peered into the blossom’s deep cup. It pulsated. Each white petal wore a smear of faded carmine at its tip, like a painter’s afterthought. Yellow and burgundy vied for dominance below six anthers, each pink and precious as a cat’s nose. Beetles tumbled in the trichomes, bathing in the pollen and reradiated warmth offered by the refuge of petals—a one- stop restaurant and hotel for six-legged pollinators. 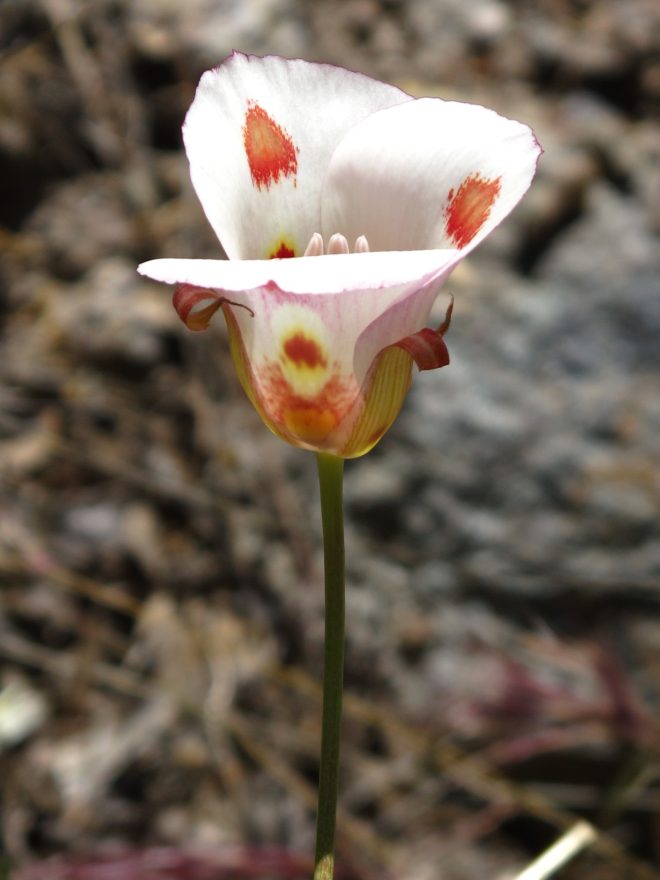 Sweaty on the trail and with a memory card loaded with supermodel species, I didn’t know at the time that butterfly mariposa is one of the most well-known of the genus. Though as Mary E. Gerritsen and Ron Parsons write in their book, Calochortus: Mariposa Lilies and Their Relatives, it has “such amazing variability that a book could be written just on its different color forms.” Rust, violet, apricot, cream. Striped, polka-dotted, kaleidoscoped. Had I an inkling of their relative commonness, would I have been any less smitten? I doubt it.

A few years later, I was reacquainted with my old friend, Tolmie’s star-tulip, while road-tripping down the Sonoma Coast in between graduating from a university in Washington state and returning for my seasonal job as a park ranger in the North Cascades. This time, it speckled the crumbling cliffs of Salt Point State Park. Though the genus stretches from British Columbia south through Mexico and even reaches eastward to dot the Dakotas, over 40 of its 73 species exist in California. Seeing these lavender star-tulips practically on the beach reiterated how homesick I was for my native state. 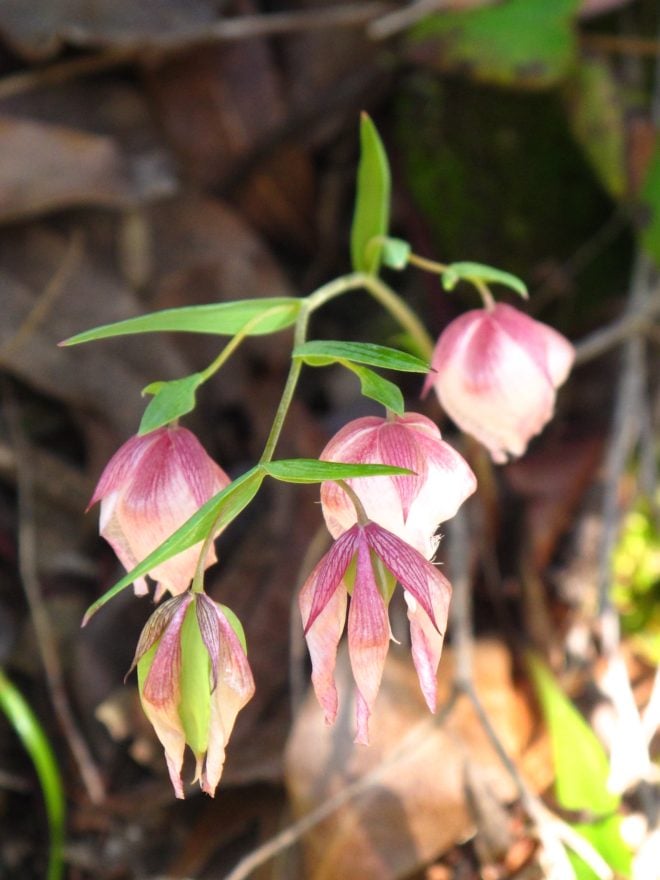 Farther down California State Route 1, I detoured onto a trail in Big Sur. The red form of pink fairy lantern (Calochortus albus) lined the switchbacks that zigzagged above a canyon dense with redwoods. Its paler version is the species John Steinbeck celebrated in East of Eden, a story which unfolds just over the Coast Ranges in the Salinas Valley: “These were so rare and magical that a child, finding one, felt singled out and special all day long.” (Though pink fairy lantern is not actually a rare one, even 57 years after Eden’s publication). If I had any reservations about where I needed to be, Steinbeck’s celebratory words and the rosy baubles of this Calochortus laid them to rest.

So I found myself, not long after, in Napa’s Sugarloaf Ridge State Park. It was mid-spring, seven months after the Wine Country fires of late 2017 burned over 80 percent of the park. Scorched trunks of manzanitas (Arctostaphylos) sprouted fresh, pliable leaves. A rainbow profusion of ephemerals scattered the hillsides, gorging on the nutrients released by the inferno. Emerging from the rocky soil was another new-to-me species: Diogenes’s fairy lantern (Calochorus amabilis). Heavy with raindrops, their lemon-yellow heads nodded downward, discretely hiding their stigma and stamens save the ones already fertilized, their ovaries swelling like green balloons between withered, amber petals. Like so many of California’s famous wildflowers, Calochortus thrive after intense fires. I wonder how this genus will fare—with so many of its species categorized between “vulnerable” and “critically endangered”—as devastating wildfires become an increasingly regular aspect of life in the state. Will this “beautiful grass” bloom across the landscape in response to the flames, a floral phoenix offering renewal in the wake of destruction? 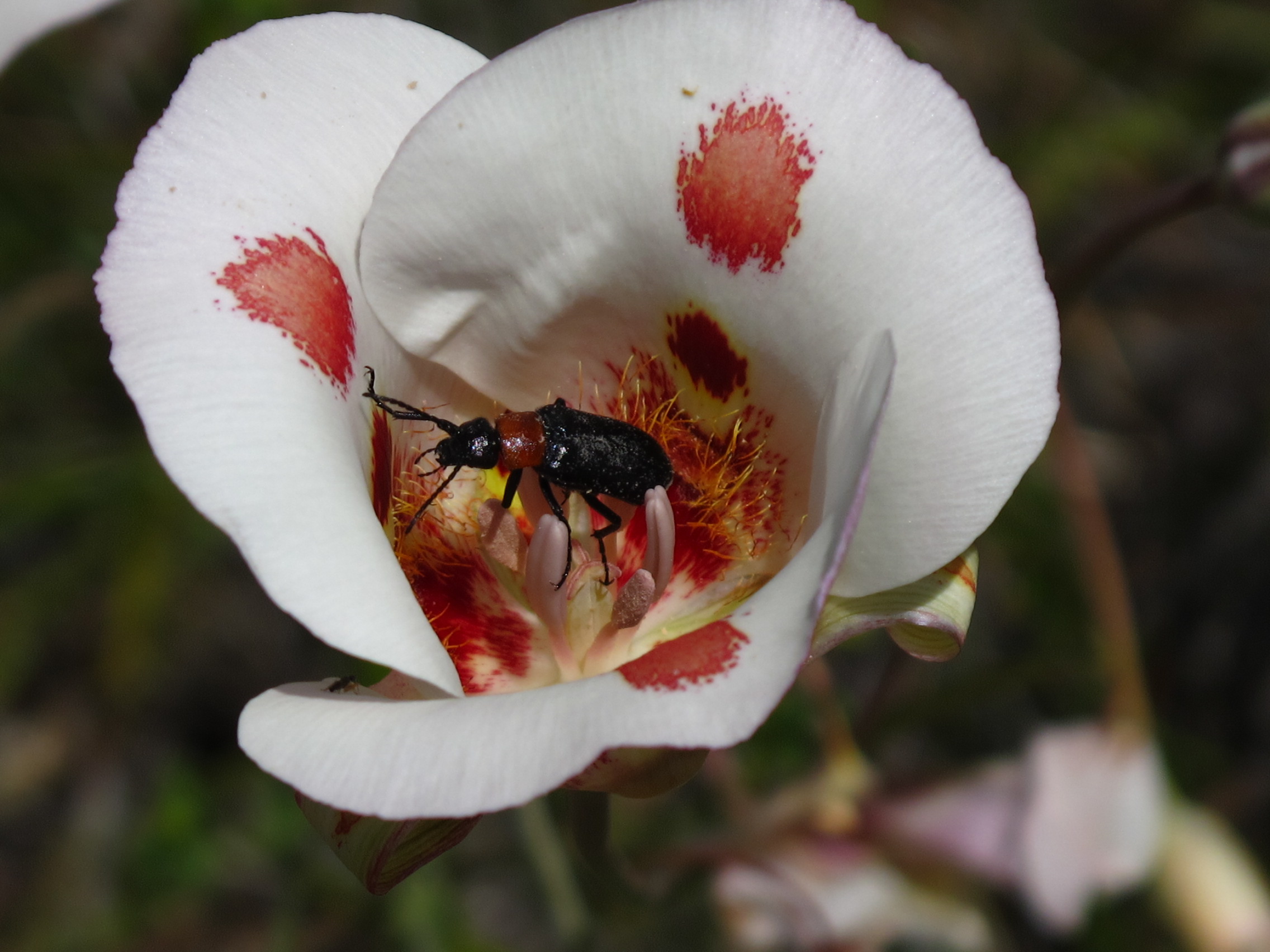 Long before Calochortus became a part of my life, long before my life, it was the runner up in the competition for the state flower in 1890. This isn’t saying much: after a “spirited discussion” among the voters, Calochortus garnered a scant three votes while the California poppy (Eschscholzia californica), as we know, won the rest—the other candidate, the poor Matilija poppy (Romneya coulteri), received none. I encounter the California poppy almost daily. Its orange cheeriness rarely fails to make me smile. Considering the past, though, it is hard not to wonder if the preservation of California’s shrinking habitats would be that much stronger if Calochortus, with so many endemic species, ranked higher in the public consciousness. 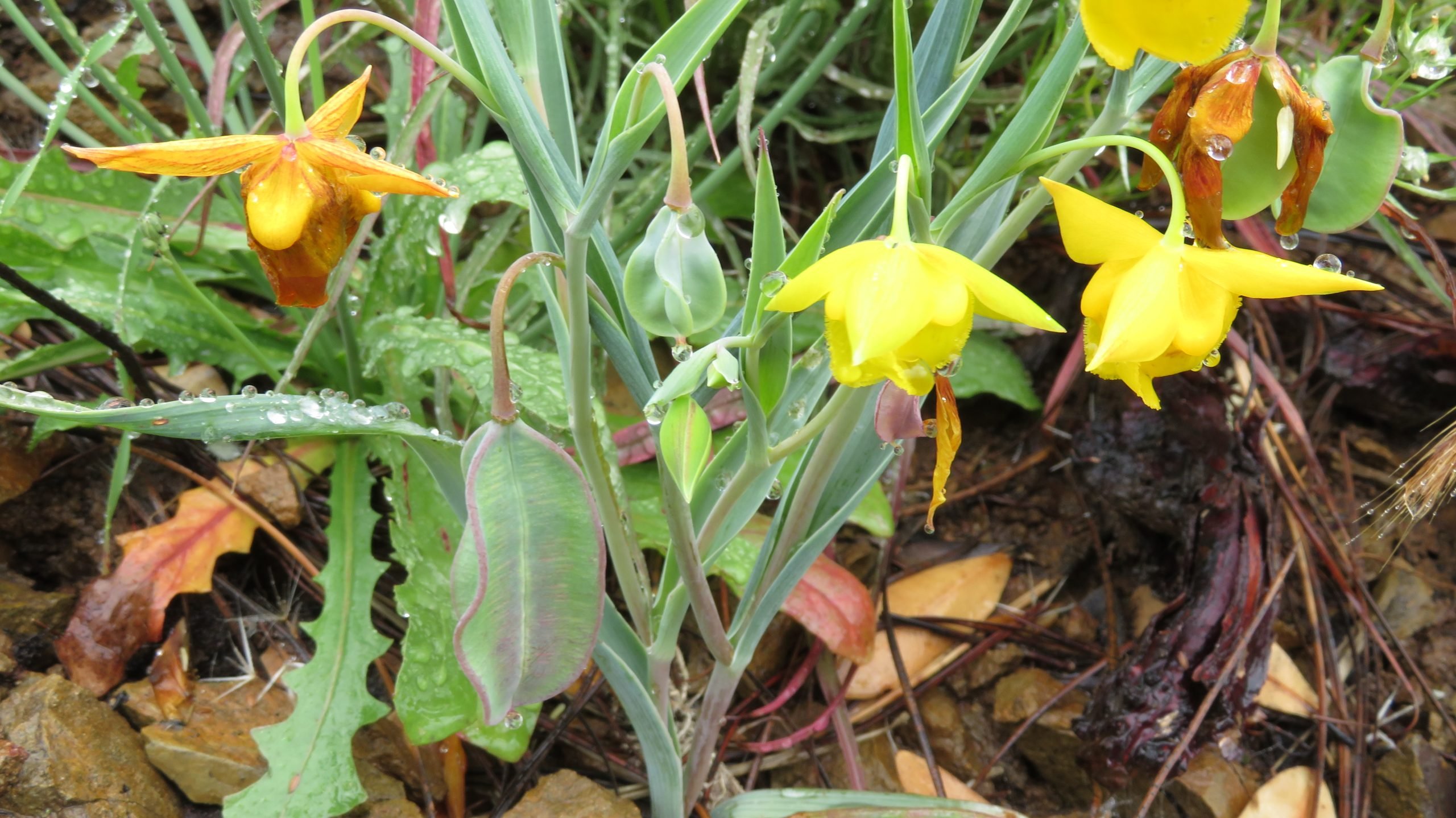 Looking toward the future, I am stoked to have more opportunities to indulge my “calochortophilia.” I’ve yet to alight upon Tiburon mariposa (C. tiburonensis), a species confined to Ring Mountain and only a serpentinite stone’s throw from where I live. The vermillion burst of desert mariposa (C. kennedyi) will be a treat someday on a Mojave mesa. And with only 31 documented occurrences, returning home and searching for the “severely imperiled,” understandably frazzled-looking San Luis mariposa (C. obispoensis) is already on my calendar.

“Calochortophilia” won first place in the 2019 Pitschel Prize. Author Judith Taylor developed this essay contest with the theme “Natural California” to honor the late Barbara Pitschel, the head librarian of the Helen Crocker Russell Library at the San Francisco Botanical Garden for almost 30 years. The contest was open to students in the Environmental Horticulture department at City College of San Francisco.