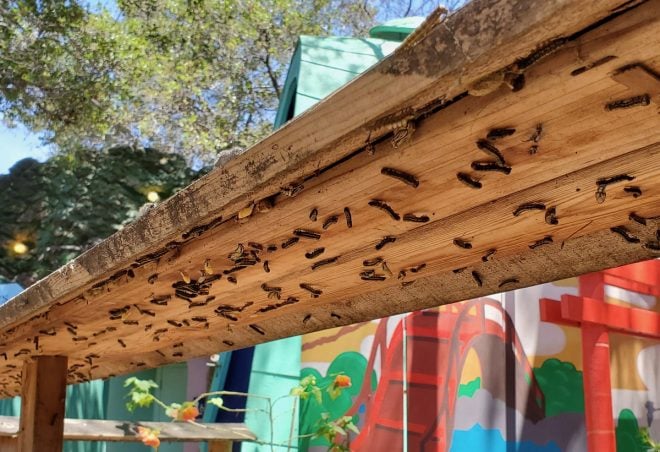 It’s easy to feel small—especially right now with the COVID-19 pandemic and societal response to racial injustice in the forefront of our minds. Everything around us seems monumental, and it has gotten so overwhelming for me that I had started to lose not only my focus, but honestly some hope. This week I got the boost I needed, from an unexpected place—Brachymeria.

During the months of March to May, the trees that I care for had an infestation of California oakworms that defoliated their canopies. By early June the caterpillars had turned into pupae, waiting to emerge and start their lifecycle and defoliation all over again—a summer generation, just as the trees had started to recover and leaf back out. I was devastated.

Three weeks passed. I saw empty pupal casings, moths flying in the sky and eggs being laid, all tell-tale signs of impending defoliation. Then something curious happened: the canopy stayed intact.  There were more and more bright green, fresh leaves growing and the canopies began to once again provide shade for the gardens below. I was relieved, but also curious. 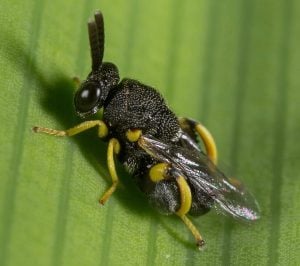 It was only then, looking through an observational lens, that I noticed them—an army of tiny wasps. They turned out to be chalcid wasps, Brachymeria ovata. The tiny, naturally-occurring parasitoid wasps had been feasting on the oakworm pupae. The wasps themselves had a population explosion (following the biological prey/predator bell curve) and obliterated the second wave of developing moths that would have resulted in defoliated trees for a second time this year.

Currently, our oak trees are leafing out and looking healthy. Instead of being surrounded by thousands of caterpillars as I thought I would be, I am surrounded by hundreds of tiny wasp helpers—all very busy, on the lookout for pests to parasitize.

I can’t tell you how much this has bolstered my morale. Watching this phenomenon has reminded me that a collection of seemingly minuscule individual actions can add up to make a giant impact. It seems so simple in the natural world, and in this instance. I’ll take the example, and the hope, where I can.

For more information on oakworm see these links.