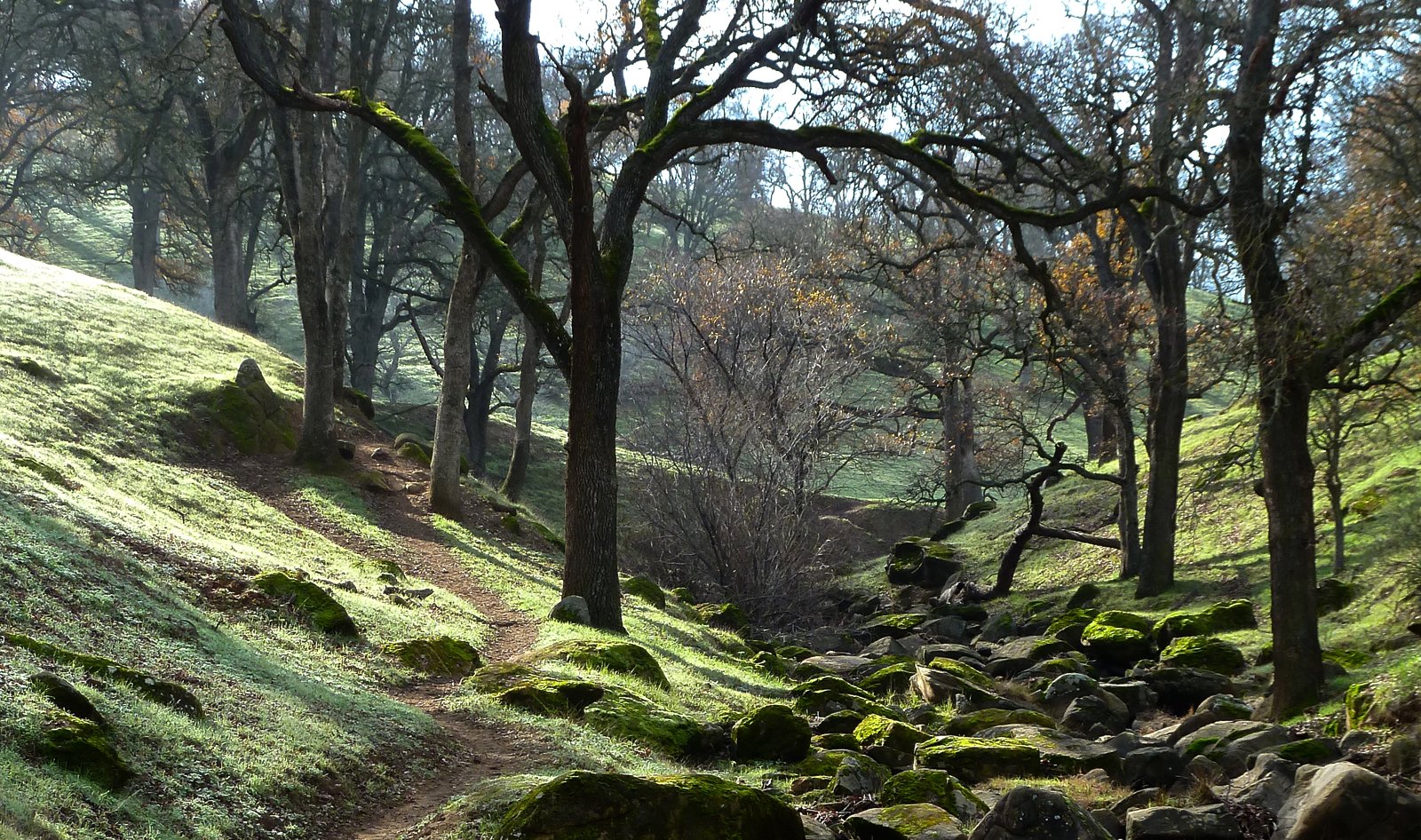 The following account of a community’s remarkable response to tragedy is an excerpt of a story that appeared in the winter 2018 issue of Flora, a publication of the California Native Plant Society.

Even as October’s fires were raging across swaths of Napa, Sonoma, and Mendocino counties, concern sprouted about the fate of the region’s trees, particularly the area’s native oaks.

Restoration expert Betty Young and fellow volunteers from the California Native Plant Society Milo Baker Chapter in Sonoma County began gathering acorns from around the area. It was prime harvest season, and the seeds could be banked against the day when those scorched acres could be replanted.

The firestorm that swept through Wine Country burned an estimated 200,000 acres, killed more than 40 people, and destroyed or damaged 8,600 structures, including homes of some CNPS members. Large portions of parks and preserves, including 100 percent of the 535-acre Bouverie Preserve in Glen Ellen, fell within fire perimeters. The blazes’ ferocity stunned even fire pros.

During those first days, the fires’ cause was unknown but discussed heavily. Some people even wondered: Did the trees have something to do with it? “It’s a common public reaction to fires,” says Dan Gluesenkamp, executive director of CNPS. “People start blaming the vegetation.” But removing native trees stimulates invasive weeds and actually increases the chance of fire.

At the same time, the CNPS office became a clearinghouse for damage updates and anxious questions. Even one CNPS member who had lost his house checked in to express a growing concern: “Don’t let people cut down their trees!”

Gluesenkamp says California’s native oaks have evolved to withstand wildfires, and wildlands need little post-fire intervention. “Nature is still bigger than we are, and has an ability to recover that can amaze. The wildland trees will take care of themselves if we don’t mess it up.”

So he knew the public dialogue had to change. After talking with Young, he worked with the CNPS staff in Sacramento to launch a public campaign, asking people of all ages to gather acorns from the fire-affected counties and send them to the CNPS headquarters. The acorns would be used for planting in fire areas, or, as it was dubbed, #ReOakWineCountry. In an effort one CNPS member first called “Operation Phoenix,” this project would not only aim to heal a wounded landscape but also a community in need of something positive and tangible. 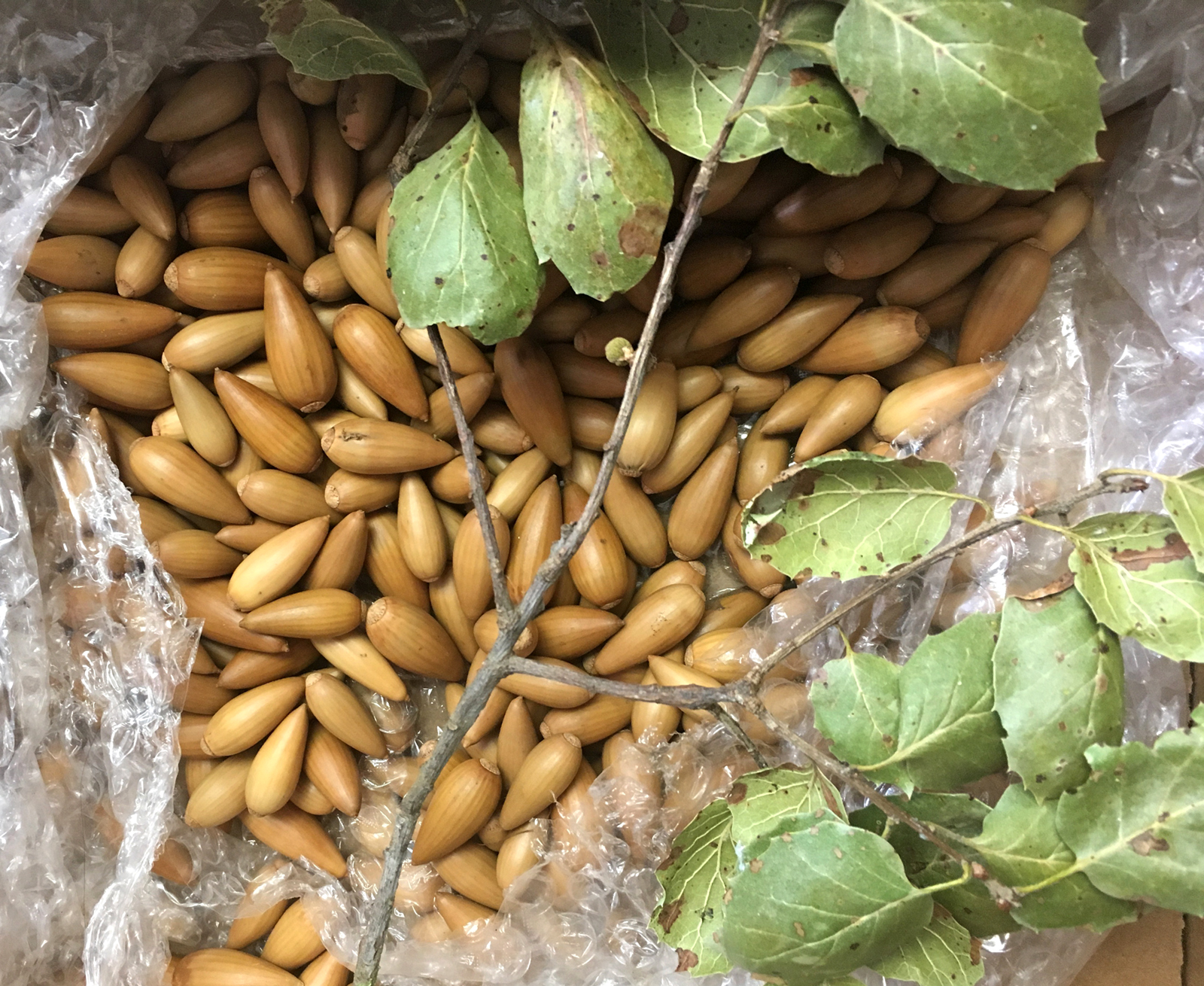 This is a typical acorn donation, just after the package is opened. (These are from a coast live oak.) Photo: Kathy Morrison

The public call for acorns was posted on a Friday, October 27, about 6 p.m. CNPS staff expected to fine-tune the information the following week. It wasn’t necessary. By midnight, hundreds of people had registered to help, crashing the CNPS email server (now repaired). “The response was overwhelming—in a great way,” Gluesenkamp says.

As it happens, 2017 was a mast year, a year in which oak trees produce an overabundance of acorns. Mast years are unpredictable, and it could be a decade before we see another. Moreover, the time to gather seeds was limited, “as acorns dry and die once they hit the ground,” Gluesenkamp says. The seeds had to be gathered, processed and placed in cold storage swiftly before they dried out and the opportunity was lost.

The CNPS office quickly became Acorn Central, with desks and tables stacked with boxes and packages and buckets of acorns of all sizes and shapes. A dedicated CNPS supporter made a timely gift to support this fire recovery work, and volunteers from the Sacramento CNPS chapter took on processing the acorn donations arriving from all over the state. The acorn collection had become not just needed restoration work but also a feel-good project, a way people could help after so much devastation.

“So many in our community were touched personally by these fires,” says Liv O’Keeffe, CNPS director of communications. “People really wanted a way to help, and this was something simple but beautiful they could do to make a difference.”

The data form to accompany donated acorns included a space where the collectors could list the nickname of the oak tree that produced the nuts. A checkoff list at the bottom concluded with “Fun was had.” Collectors got into the spirit of these questions, giving trees pet names, adding exclamation points and drawing big happy faces on their forms, notes Sacramento volunteer Chris Lewis. The postage alone was no small donation: as much as $13.60 for a full 10-by-12-inch box.

By mid-November, more than 2,000 people had registered to help, and the acorns were still coming in. “It’s been incredible how the effort changed the conversation,” Gluesenkamp says.

The call for acorns tapped something deep in state residents. “We realized people all around California want re-oaking,” Gluesenkamp said. “We’re trying to not just save trees, but also to re-establish the deep and ancient relationships between trees, other biodiversity, and people.” 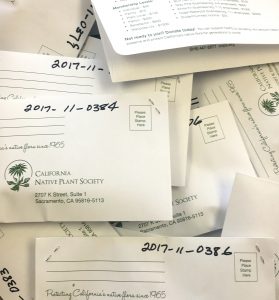 Each donation of acorns is catalogued and a sample is set aside for later reference. Photo: Kathy Morrison

In late November, Young stood in the chilly carport of her Santa Rosa home surrounded by bins and trays and water-filled buckets. “I think we have enough acorns!”

She and about 15 others from the Milo Baker Chapter had been processing acorns for five weeks, amassing more than 350 volunteer hours. Still, they weren’t quite done, even with about 26,000 viable acorns from Sonoma fire areas already catalogued and placed in cold storage.

Young is retired and a full-time CNPS volunteer now, but she is legendary in plant restoration circles. She spent many years with the Golden Gate National Parks Conservancy and with Circuit Rider Productions running restoration nurseries and promoting native plants. “She taught us all how to grow and restore oaks, as well as other plants,” Gluesenkamp says.

Young detailed the simple but time-consuming procedure for sorting the acorn donations:

First, a package sent to CNPS is opened and inspected for the variety of oak, with included leafy twigs providing important identification clues; the Sonoma area has 10 native oak types, including some hybrids. The collector’s data sheet is checked for the location of the tree. If the site falls within one of the fire zones on Young’s map, it receives a code for the specific location. Acorns from Sonoma County sites not in fire zones are set aside for school plantings and other projects. The intention is to return each acorn to the area that shaped its DNA. This is what Gluesenkamp calls maintaining a tree’s “story.”
An acorn from the east-facing Rincon Valley should be planted there, not in the Santa Rosa flatlands, for instance.

Next, the acorns are dumped into a large plastic tray, where the caps are removed. They’re culled for insect holes or other damage. Any that already have germinated also are removed; Young says the little root would just keep growing during its weeks in cold storage, rendering it unusable. “It would have been better if they’d just planted it,” she says, holding up an acorn with a nub of a root showing. It ends up in the discard bucket.

After sorting, the acorns are dumped into a bucket of water. The “floaters” are too dry or damaged to grow, so they’re skimmed off and set aside for a pig farm. The “sinkers” go in a bowl of 1 percent bleach solution for 30 seconds to surface sterilize acorns and kill pathogens. They’re thoroughly rinsed with a spray hose that also is bleach-rinsed before each use, and then dried.

Finally, the acorns are weighed. Young can figure how many are in each batch by dividing the weight by the average weight of the particular species. The data from each donation is entered on a spreadsheet. That’s how she knew she had 17,303 viable acorns from coast live oak (Quercus agrifolia), the largest group, but only 97 from blue oak (Quercus douglasii).

After weighing, the acorns are transferred to bags labeled with the same code attached to the collection form. Some perlite is added to help keep the nuts dry, and then the bags are trucked to cold storage. Some acorns, such as those from black oaks, need cold to germinate and will be kept in storage longer than others, such as those from valley oaks.

The past and future of oaks

Oaks are central to the hundreds of wildlife species that live on and under them. For nearly a thousand generations, Native Americans relied on the trees for food, Gluesenkamp says. But the state’s oaks have been in decline since European settlers arrived. The California Oaks Coalition estimates the state has lost more than 1 million acres of oak-related lands over the past seven decades.

Robin Grossinger, whose work at the San Francisco Estuary Institute includes historical ecology, says early explorers and naturalists describe with awe the huge oaks they encountered. “These amazing landscapes come through in their descriptions,” he notes. Early towns often were built right into the oaks, since they were the only shade around. Place names from Oakdale to Oakland to Thousand Oaks commemorate those trees, many of which are history.

The 20th century was a bad period for California’s oaks, especially in the oak savanna regions of the Central Valley and Santa Clara Valley, where oaks grow scattered across the landscape, Grossinger says. Early livestock ranchers had pretty much left these oaks alone. But the oak trees often were felled when agriculture shifted to orchards or vineyards.

“Re-oaking” is a relatively recent term for a movement that took hold in California in the 1970s and 80s. The California Wildlife Foundation’s California Oaks project works to protect the oak ecosystem and educate the public on the trees’ value. Efforts have picked up steam as people become aware of the benefits and resilience of oak trees. For example, San Luis Obispo County just last year adopted an oak woodland protection ordinance thanks largely to CNPS volunteers responding to the horrible clear-cutting of oak trees by Justin Vineyards.

Oaks can fit comfortably in the modern urban ecosystem, Grossinger says. The trees can be planted in many places that may not have been considered in the past, and they grow faster than people may realize, quickly adding to an area’s larger ecosystem. He notes that a live oak is planted in a traffic circle in his neighborhood. At 12 years old, “it’s already become a huge tree with a nice native understory.”

“Oaks are the ‘gateway drug’ for restoration,” jokes Gluesenkamp. “If you’re gonna start with something, start with oaks to get maximum bang for your buck. When I look at a beautiful grandmother oak tree I see 50,000 pounds of atmospheric C02 pollution that has been turned into a jungle gym for kids and a supermarket for wildlife. Wouldn’t it be incredible, if we could bring thousands of Californians to collect acorns, plant locally, and re-oak California?”

To read the next chapter in the Re-Oak Project, now moved into distribution and planting, visit www.cnps.org.