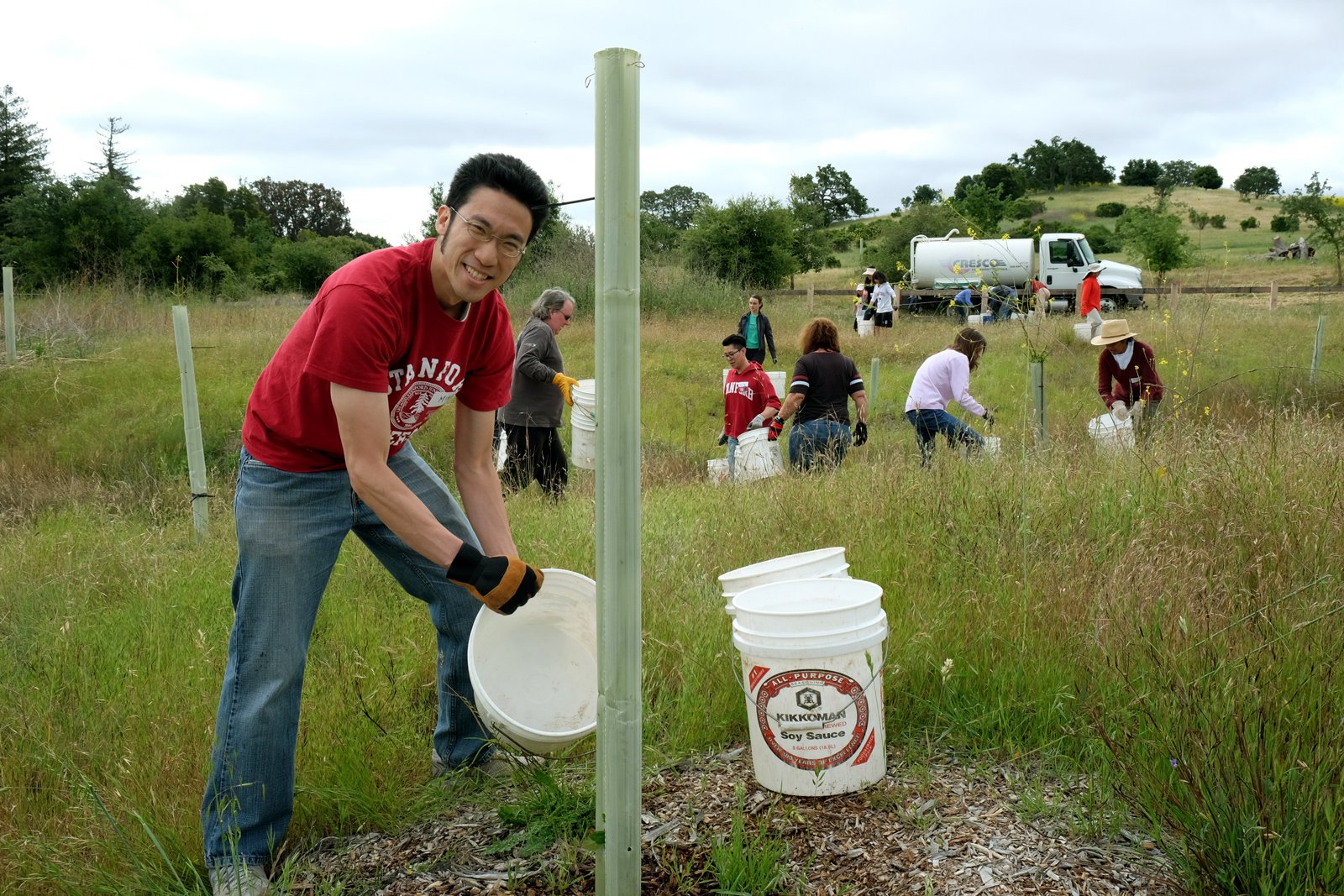 Volunteers work a bucket brigade from a tank truck into the field to water young trees. Photo: Magic

Many of us who celebrate the beauty and other benefits of gardening are increasingly aware of changes in the environment that are impacting our gardens as well as large communities of plants and wildlife worldwide on which we and those gardens rely for existence. As we grasp the enormity of these global ecosystem disruptions we wonder, “How can we help secure a future in which our local gardens and the larger planetary garden can thrive?”

This is a story of three generations—the eldest now 72, the youngest in their teens—whose evolving responses to this question have been to restore elements of ecological integrity to 1,000 acres of oak savanna and woodland degraded by centuries of human exploitation. Over the course of 40 years, we’ve progressed from concentrating single-mindedly on acorns and oaks to simultaneously addressing hearts and minds. 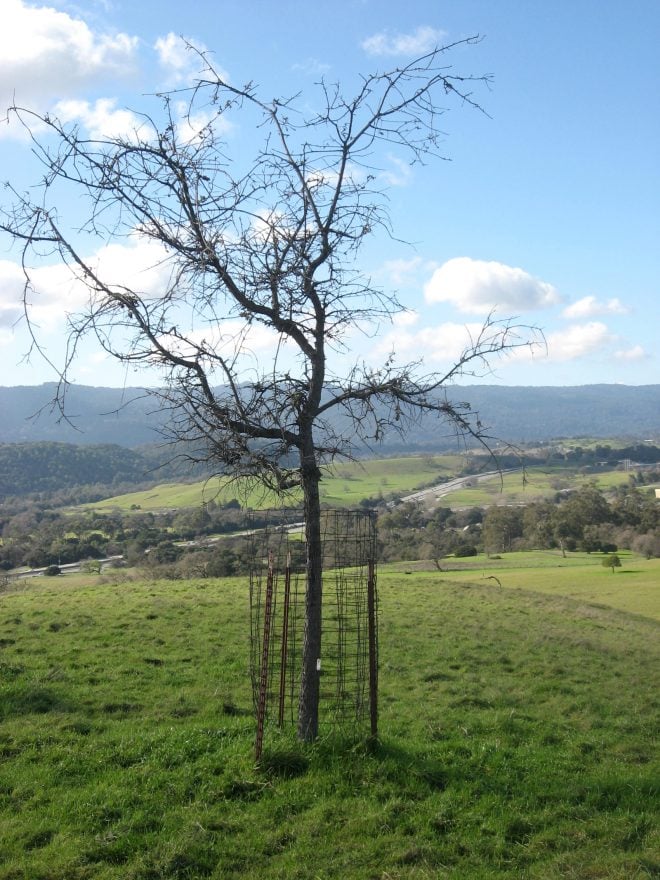 A wire cage placed around this oak protects it from cattle grazing on Stanford land. Photo: Magic

In 1970, an East Coast transplant fresh out of law school whose closest brush with horticulture had been mowing suburban lawns as a youth, arrived in Palo Alto. Dazzled by the remarkable diversity of plants that thrived there, inspired by the recently celebrated first Earth Day, and harboring dreams of someday going “back to the land,” he bought a Sunset Western Garden Book and started growing everything from apricots to zucchini. Savoring the fruits of his first harvest, he committed to gardening. 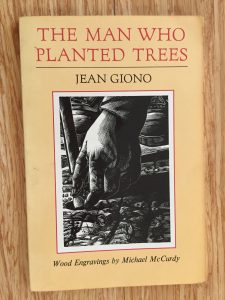 Running on rural open space owned by Stanford University, he developed a heartfelt connection to the native oaks that dominated the landscape. After several years of watching aged trees decline and fall, he realized what might have been obvious to a more experienced eye: young trees were rare and in some places, entirely absent. Feeling gratitude to Stanford for opening its lands to public access, he began—naive images of The Man Who Planted Trees swirling through his head—to bury acorns with the idea that he was “planting for the second hundred years.”

From the outset, he learned, as gardeners do, that complexity is the nature of nature.

His acorn sowing, intended to jumpstart oak population renewal, proved instead to be a supplementary feeding program for cattle that seasonally occupied the land.

A bit wiser and with renewed resolve, he began to clandestinely fence a half-acre site that was hidden from maintenance roads and nearby buildings. Apprehended and ordered to stop—this was, after all, someone else’s land—he presented his case to Stanford faculty and administrators and sought their support. Concerned planners toured the land with him and subsequently commissioned an assessment by consulting foresters who confirmed a 75-year “age gap” in oak populations. They proposed that cattle be excluded from some areas and direct seeding in others to promote regeneration. Stanford land managers responded by hiring Magic—our whimsically named public service organization founded by our protagonist and a few friends “to study and teach ecology”—to implement these recommendations.

Since 1982, Magic gardeners have led more than 20,000 volunteers in planting and establishing thousands of oaks, and tens of thousands of understory species. Over decades we’ve met and surmounted one obstacle after another, defending our plantings against cattle, deer, ground squirrels, hares, rabbits, voles, vandals, weeds, fire, and even feral cats. We’ve advocated to prevent trees from being removed to make way for roads and buildings. We’ve irrigated through punishing droughts that were exacerbated by record heat. We’ve watched with dismay as an introduced pathogen (Phytophthora ramorum) induces Sudden Oak Death in coast live oak, and threatens to reduce populations of this keystone species by half or more. And we’ve labored to suppress other invasives, such as  Dittrichia spp., Centaurea spp., as they displace natives with which the oaks co-evolved, and upon which their wellbeing may depend.

As we’ve suffered setbacks and adjusted our methods to account for them, we’ve been moving away from the simple acorn planting of The Man Who Planted Trees. In this fictional setting—a valley in the Alps during the early twentieth century—nature was robust enough for the dogged efforts of a lonely widowed shepherd to transform a barren landscape into an ecosystem brimming with life. In the San Francisco Peninsula foothills in the early twenty-first century, nature has proven less resilient.

Weather is perhaps the challenge we’ve drawn the deepest lessons from. More than 30 years ago, prompted by a punishing multi-year drought, we began researching climate change. While we lack the wherewithal to prove that the extreme weather we’ve observed is a result of anthropogenic climate change, we find the accumulating evidence for this phenomenon persuasive. In 1999, Magic authors published “Global Climate Change and California Oaks” in the journal of the  International Oak Society. In that survey of scientific literature they catalogued a host of likely impacts, many of which have already begun.

Implications of climate change are stunning. Each half-degree Celsius of warming in mid-latitudes corresponds roughly to a 100-kilometer move toward the equator. If current projections of ~3.5°C by 2100 prove accurate, Palo Alto’s climate may be similar to that of San Diego today. With warming projected to continue into the next century, within a few decades it may become more like Northern Mexico. As we contemplate accelerating global warming of the past century and its implications for the future, we question whether oak populations will persist where we’ve worked to sustain them. So much for “planting for the second hundred years”—unless we devised a more effective strategy. 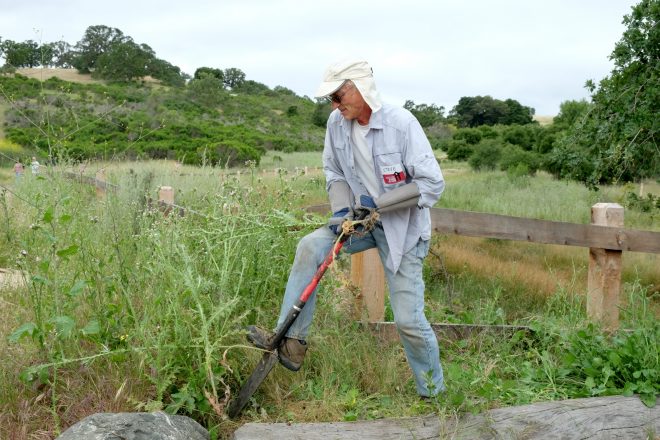 Along with planting and watering new plantings, volunteers are vigilant in monitoring and removing invasive plants. Photo: Magic

A transition to hearts and minds

As much as we enjoy looking at the trees we’ve established, some of which now tower over us on trunks we can barely reach around, we’ve tempered our dream that these may someday replace the majestic giants that took root more than a century ago. While we continue to plant and protect, and to celebrate survival, we recognize that our modest efforts my be overridden by the actions of billions of fellow humans acting in ways that are collectively producing global change without precedent in speed, scale, and quality. 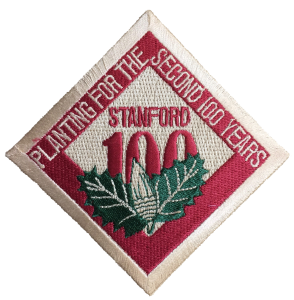 A vintage patch commemorating the “Planting for the Second 100 Years” initiative.

From the outset, our predecessors aimed to make “Planting for the Second Hundred Years” a vehicle for learning and teaching about ecology. They chose to rely almost exclusively on volunteer labor because they saw widespread enthusiasm for tree planting as means to engage people in thinking more about the environment, acting to limit harm—and, where possible, to contribute positively.

Initially, they presented just a few basic ecological ideas: energy flows, matter cycles, food webs, co-evolution, and population dynamics. As they became more aware of the extent of devastating human impact on the biosphere, they began emphasizing how the world is increasingly a result of human actions and how these are a reflection of our values.

Today we invite volunteers to view themselves, humankind, and the rest of our surroundings in terms of an overarching ecological framework. We emphasize that every organism, including each of us, persists by maintaining a match between its characteristics and those of its environment. We draw attention to how, by accelerating environmental change, humans are driving a Sixth Great Extinction now underway and threatening our own health and survival.

Most volunteers concur that if we alter our behavior to secure a future for ourselves and other life forms, our values must change as well. We encourage them to consider how ecology can guide our evolving values by predicting what is possible, help define our goals, and how we might achieve them.

“Planting for the Second Hundred Years” is illustrative. Founders thought they wanted to plant acorns to re-establish self-sustaining populations of oaks. Over time all of us have learned that planting acorns was far from sufficient even to be successful in artificial regeneration, and that self-sustaining populations of oaks on the lands we garden may be a thing of the past.

As we’ve accumulated evidence for these conclusions our values have evolved. Currently we believe that our more enduring achievements may well be our success in motivating people to think ecologically, especially when thinking about values. As these volunteers develop values more fully informed by ecology, they influence others to do so as well. In this way, our influence on landscapes near and far may be greater than what we’d envisioned when we began. 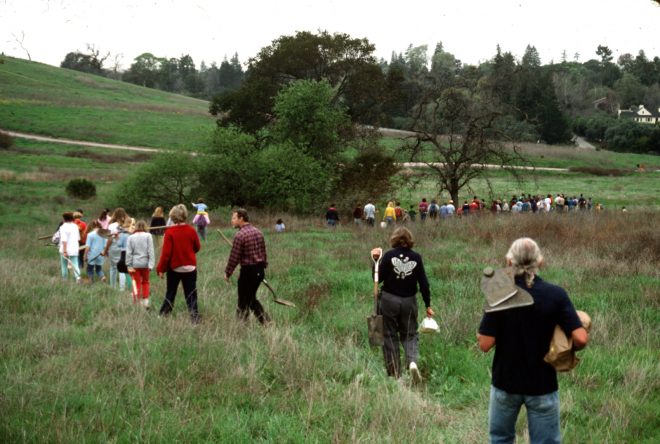 Dozens of Magic volunteers troop out into the open space to help plant, water, and care for new plantings. Photo: Magic

We garden in times more volatile than those inhabited by our ancestors, and our familiar ways may be an anachronism. Global phenomena are increasingly dominant. Humans are making life more difficult for many living things, including us. Broad ecological thinking is essential to reshaping aspirations formed in an earlier era so that we may more successfully adapt in this one. Re-examining values—ideas about what we want and how to get it—in the light of science may be necessary if we are to secure a future in which we, our gardens, and subsequent generations of both, flourish.

For an evaluation of oak performance on the Stanford campus see “30 Years of Observing Oaks at Stanford.”