The grandeur of peonies in the spring garden is captivating. They are outstanding garden plants for a multitude of reasons—they are long lived, low maintenance, pollinator attracting, drought resistant, and available in a large array of colors, styles, and foliage types. 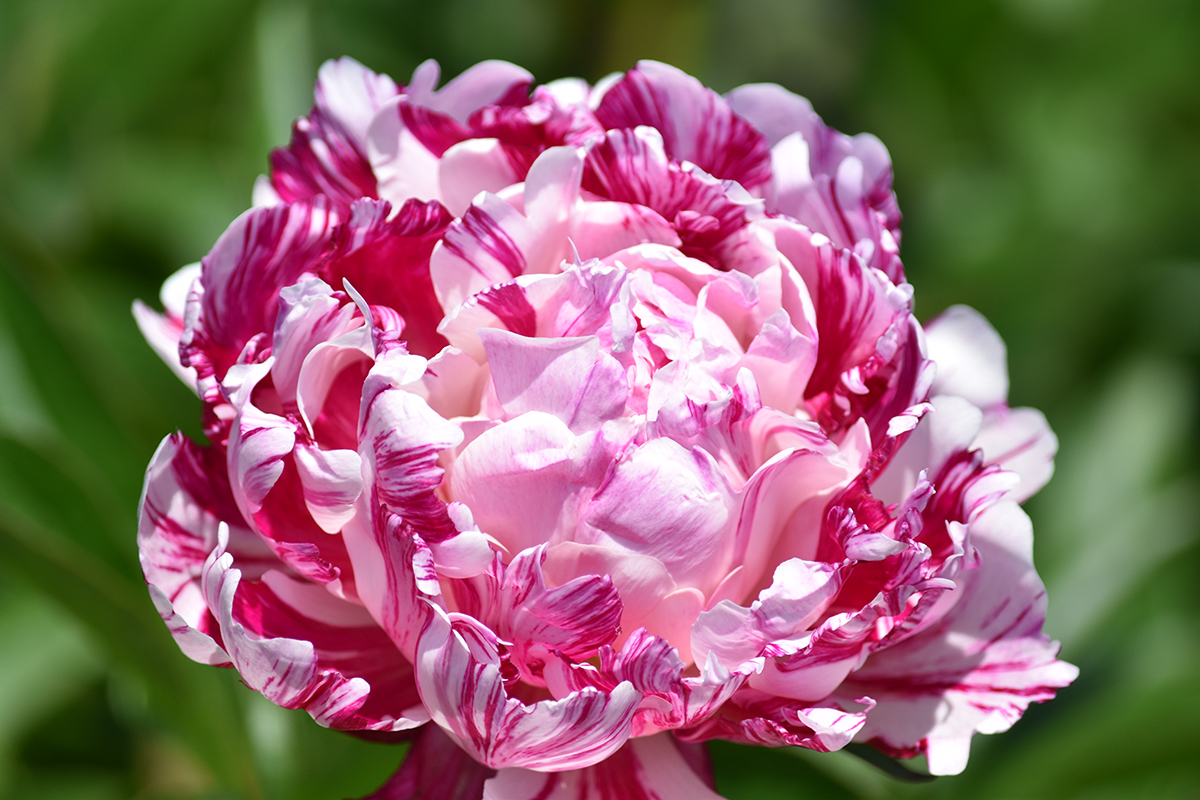 The pollen and nectar of a single-petaled or semi-double peony attract pollinators. Being accustomed to full flowers with many petals, we may seldom encounter a simple peony with fewer petals. The multitude of golden anthers held within those petals can be a feast for essential pollinators. As the bee forages for food within the peony, the hairs on its hind legs brush the ripe pollen, collecting it to feed the larvae in the hive. The pollen provides protein and other nutrients for their diet. 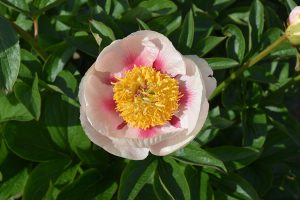 You might also encounter a sticky substance on the bud or below the petals that is also valuable to the bee and other pollinators. That sugar-laden substance, nectar, attracts the bee (and the ant) to the flower. Honeybees use nectar as the raw material to produce honey. Peony blooms have glands called nectaries at the base of the ovary to nutritionally support the flower as it develops. Nature facilitates plants and animals nurturing one another through a process called coevolution, thus the nectar can be a food source to both plants and, in this case, insects. As the bee searches down in the flower for the nectar, it encounters the pollen, which it not only carries back to the hive, but also spreads to other flowers as the bee continues its foray.

I am always amazed to pass an abandoned farmhouse site or a neglected cemetery and see a peony blooming with no one to water or fuss over it for many years. No wonder it was Grandmother’s favorite flower! She was too busy feeding animals, churning butter, washing clothes on a washboard, making bread, and planting and harvesting the vegetable garden. There was no leisure time to fuss over flowers. Those huge, fragrant blooms must have been such a delight that she lined her walkway with them. Whenever there was an event to be remembered—such as a wedding, a birth, a birthday, or a friend’s or child’s upcoming move—she dug out a section of the plant and presented it as a memory or keepsake. There are peony plants that have been shared for well over a hundred years. They are successful from the town of North Pole, Alaska to northern Florida. On the West Coast, peonies thrive as far south as the San Francisco Bay Area, but with selection and care will also bloom further south.

Immigrants brought divisions of the common peony (Paeonia officinalis) to America. The blooms most frequently seen of the species are a deep red with a multitude of smaller petals in the center. Intrepid plant traders brought the Chinese peony (Paeonia lactiflora) from China to Britain where it was used in developing new varieties before it was brought here. The focus in Britain and France was for long-stemmed double blooms to embellish their manors. The current trend is for stronger stems, so the garden plants don’t fall over in mud in the rain. For instance, the common peony tends to look down, while delightfully strong stems hold its progeny ‘Red Charm’ (Paeonia ‘Red Charm’) upright, allowing the bloom to be enjoyed from above. 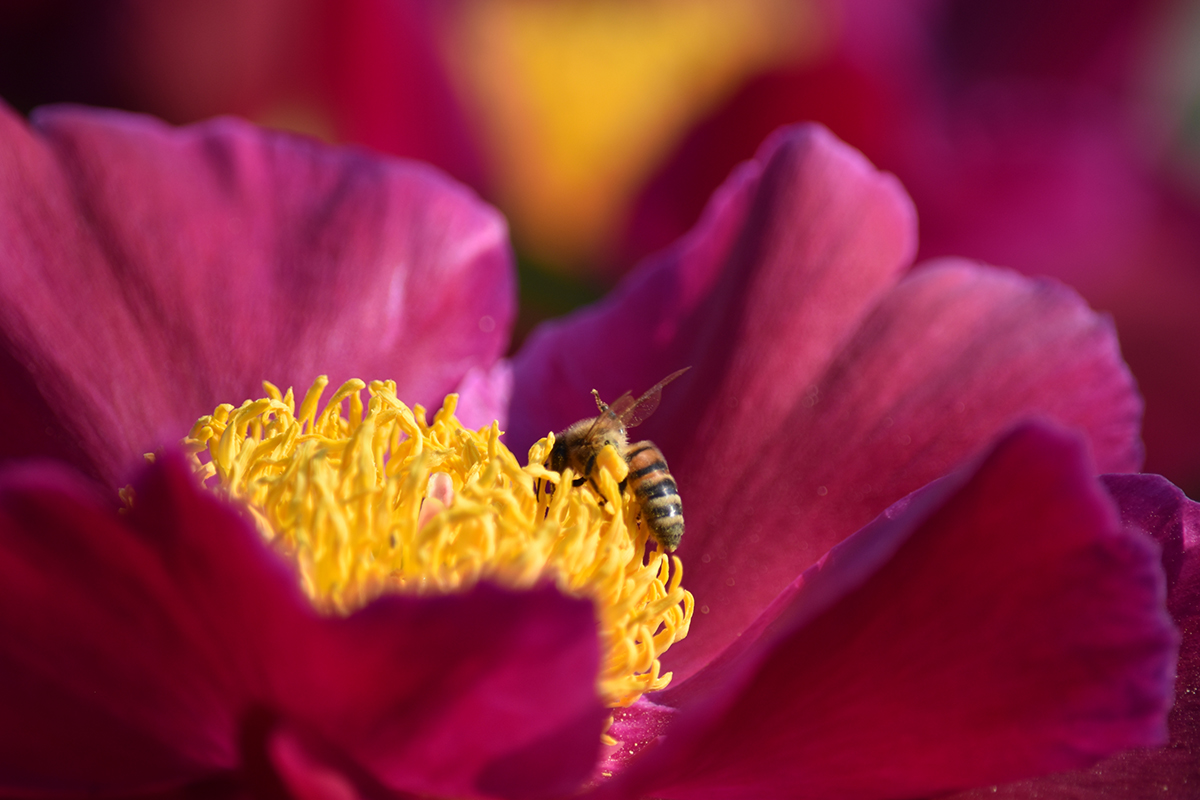 There is currently a great deal of peony hybridization throughout the world, so there are many exciting new cultivars to enjoy! Purer reds, coral and apricot colors, magnificent yellows, vibrant pinks, romantic blushes, raspberry colors, striped blooms, bi-colors—even pinking-shear petal edges—all bring a new look to an old-fashioned plant. Attention is being paid to stronger stems, fragrance, both shorter and taller plants, and varied leaf presentation. 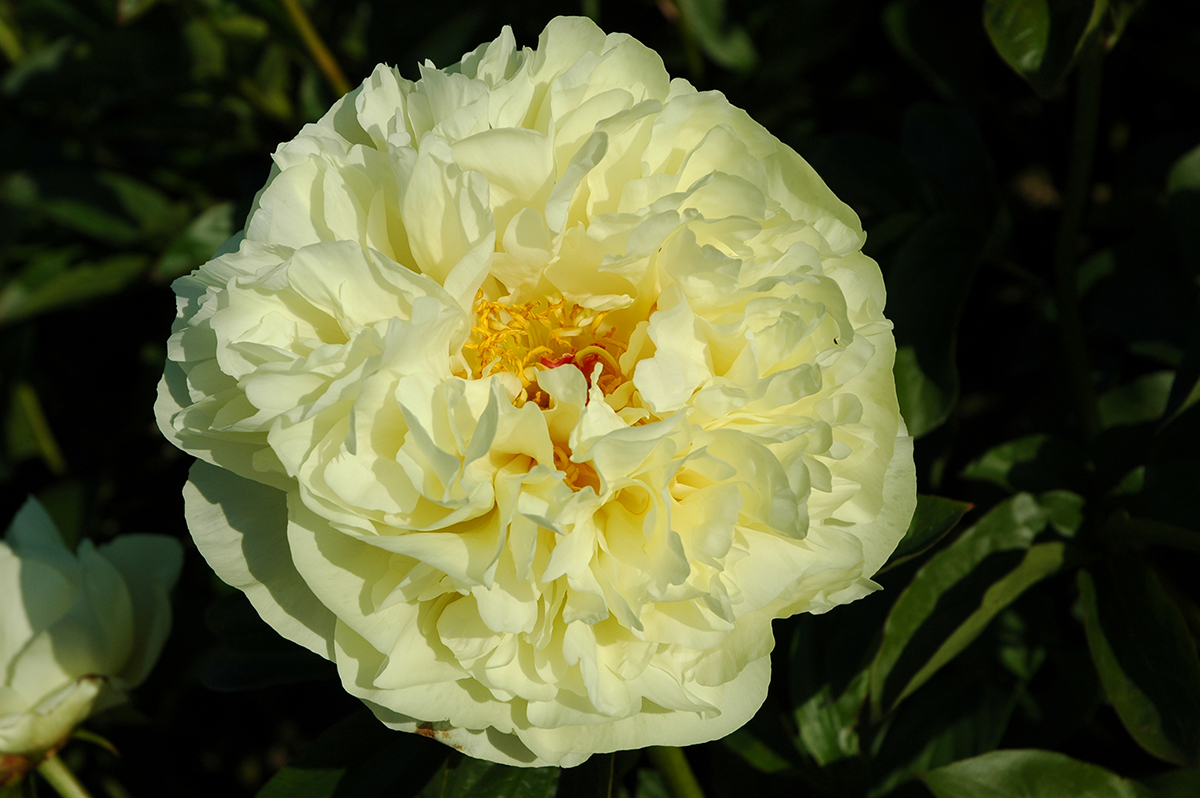 The root of a peony is starchy like a carrot but grows horizontally instead of downward. The buds that produce the stems, leaves and flowers are called “eyes.” While every seed contains a miracle, it is with great wonder that I see a peony eye, to know that all the capability to make stems, leaves and the multi-petaled bloom lies within that small bud.

Peonies are normally planted bare root in the fall, although potted peonies can go in the garden any time of year that the soil is not frozen. Choose a location where the water drains well. Clay soil may have to be amended. Three-foot spacing allows for good air circulation to ward off gray mold (Botrytis paeoniae)—a fungal disease the occurs when the foliage stays wet for long periods of time—and to allow for the mature size of the bush. For a bare root plant, a hole the depth of a shovel blade is sufficient; for a potted plant, use the depth of the pot. You may mix compost and bone meal into the soil, or a tulip/daffodil bulb fertilizer, noting that peonies require little nitrogen. Here in western Oregon our soil is acidic, so we add a cup of lime or dolomite to the planting hole, but alkaline areas would need sulfur. Your local extension service or Master Gardeners can help you interpret soil test results. When the planting hole is ready, the eyes should have only two inches of soil cover, as they don’t like being buried deeply.

A peony plant is considered mature at three years. The first-year plant will have one or two stems and double that the second year. Specialty peony growers provide the best chance at obtaining superior divisions. You can move the plants in the fall but they like it best when placed in a permanent location. As noted above, they take little care, making them ideal for environmentally conscious gardeners.

Watch for signs of gray mold in wet seasons. The fungal disease can attack the stem at the base, with the stem sometimes falling over, or the leaves will look like lettuce that is past its prime, or the buds will turn black. Remove the affected part of the plant and put it in the garbage so the fungal spores cannot reinfect the plant. Spray the plant with any fungicide recommended for blackspot on roses every 7–10 days until the weather becomes dryer. 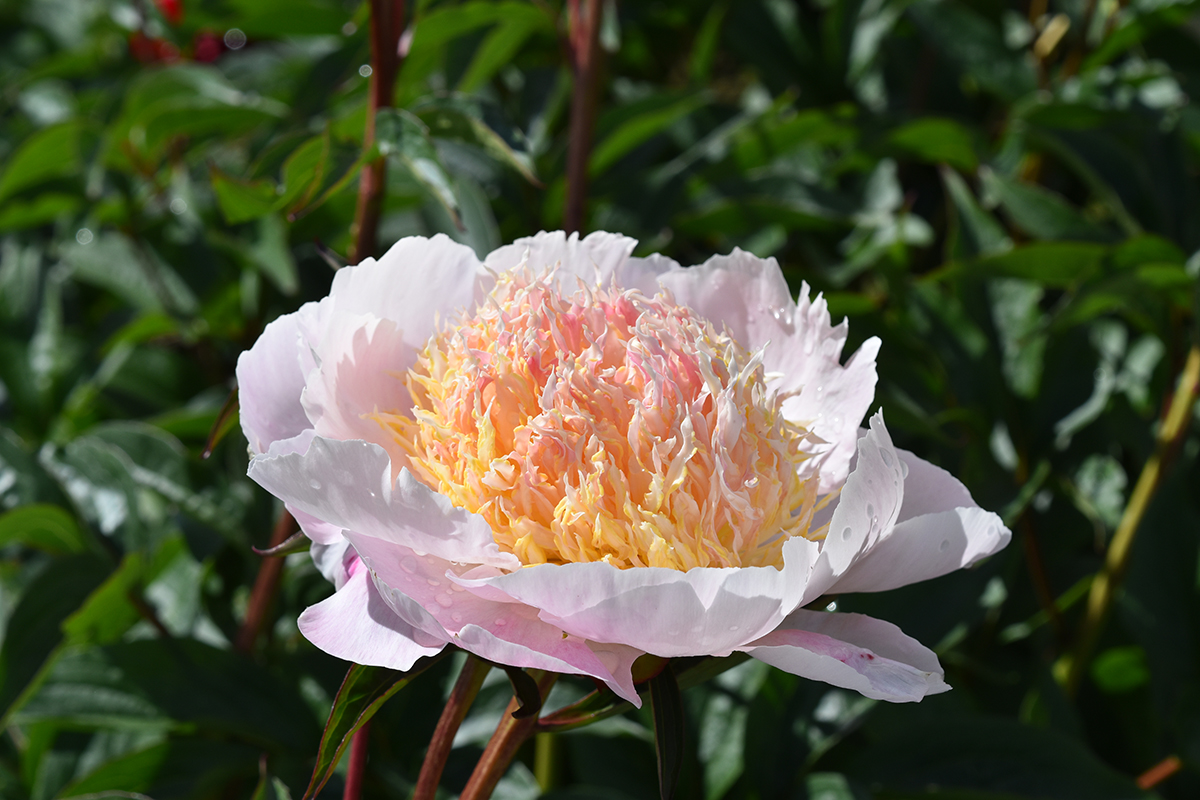 When the bloom has faded, you remove it by cutting just above a leaf. I like to do it just above a three-segmented leaf and at a height that gives the plant a pleasant, rounded appearance. Some peonies, depending upon the weather, have colorful foliage in the fall. In the autumn, cut the stems clear to the ground. Dispose of the foliage in the garbage to reduce the possible number of fungal spores available to attack the plant in the spring. Moisture-retentive mulching is neither recommended nor needed.

These are resilient plants. I have had reports of a doghouse unknowingly being placed over a peony plant and when removed, the plant popped above ground again. Snowmobiles have run over them. Weed eaters have chopped them down. And still they persist! 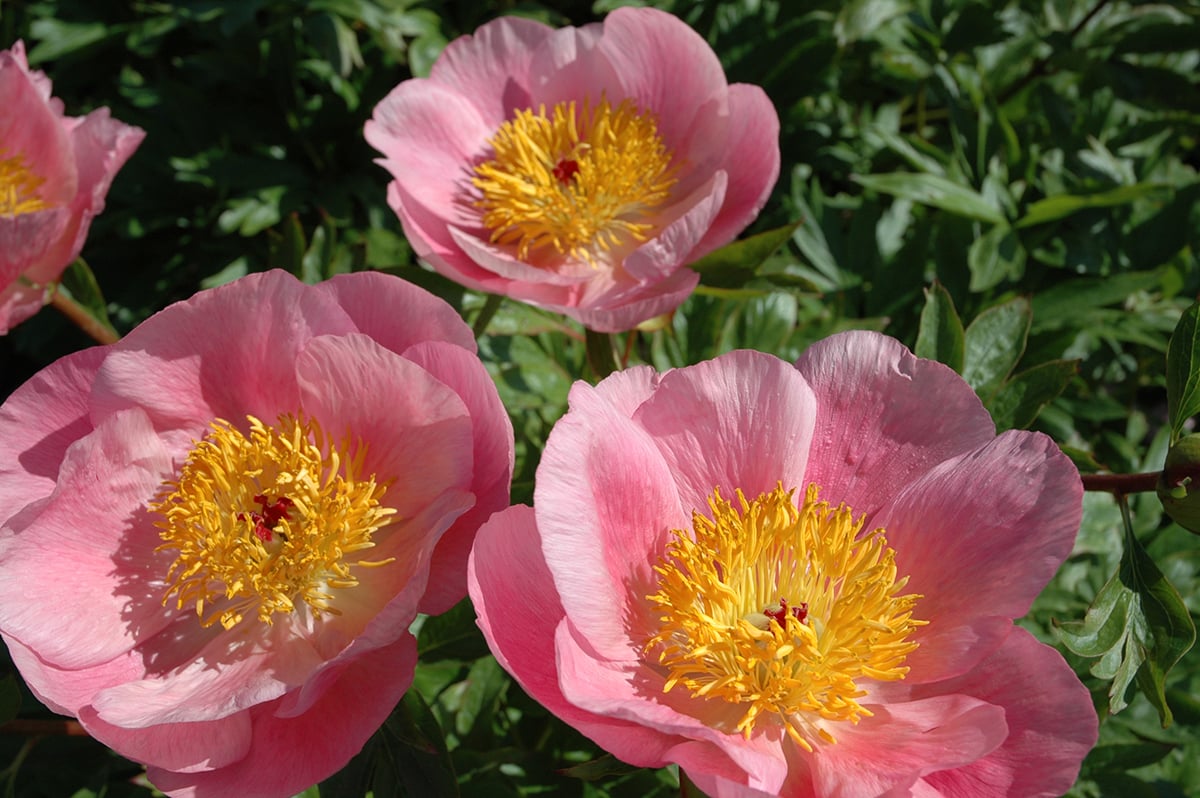 We on the West Coast are privileged to be the home of the only peonies native to the continent: Brown’s peony (Paeonia brownii) and California peony (Paeonia californica). Brown’s peony grows at altitudes receiving winter snow and little summer rain. California peony grows in chaparral and near desert areas which also receive little or no summer rain. A Los Angeles resident told me that they grow in the LA hills and come up in abundance after fires. The two species are quite similar to each other, being low growing with silvery-green foliage and small burgundy petals. Brown’s peony has been studied as a nectar food source for early emerging pollinators that are not bees. Neither are sought out as garden plants as the blooms are not showy and they must be kept from summer watering. Paige Woodward of Pacific Rim Native Plants in British Columbia points to research indicating that this might hold the key to understanding the origin of all peonies and future DNA testing might tell us more. 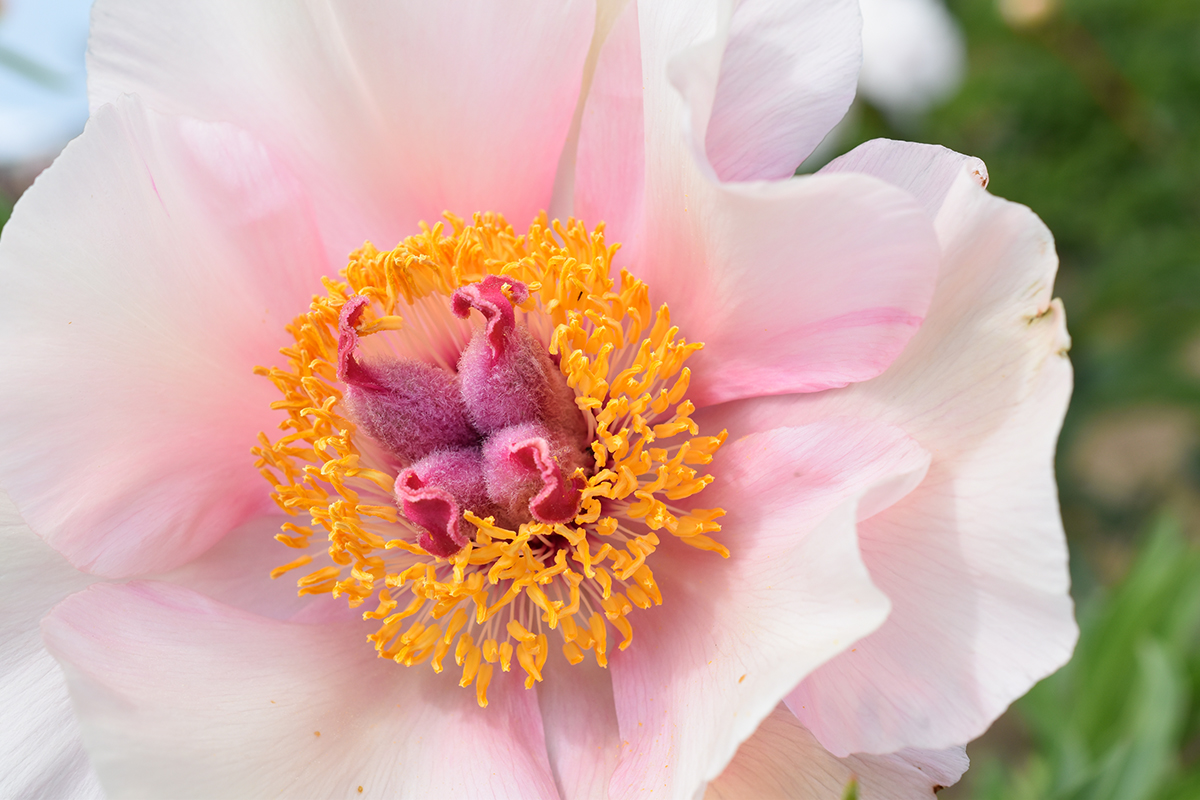 The peony deserves its place back in the spotlight, and the opulent silkiness of the flower is only one of its outstanding attributes. Their resilience and resistance against diseases and pests are sought-after garden characteristics, along with their handsome foliage and as a food source for bees. Consider them for your garden.

The American Peony Society has a listing of specialty peony vendors and a great deal of information on peonies.

For recent research on peony evolutionary history, Shi-Liang Zhou and colleagues published this 2020 article in the Journal of Systematics and Evolution.

Michener, David and Carol Adelman. 2017. Peony: The Best Varieties for Your Garden. Portland, OR: Timber Press.