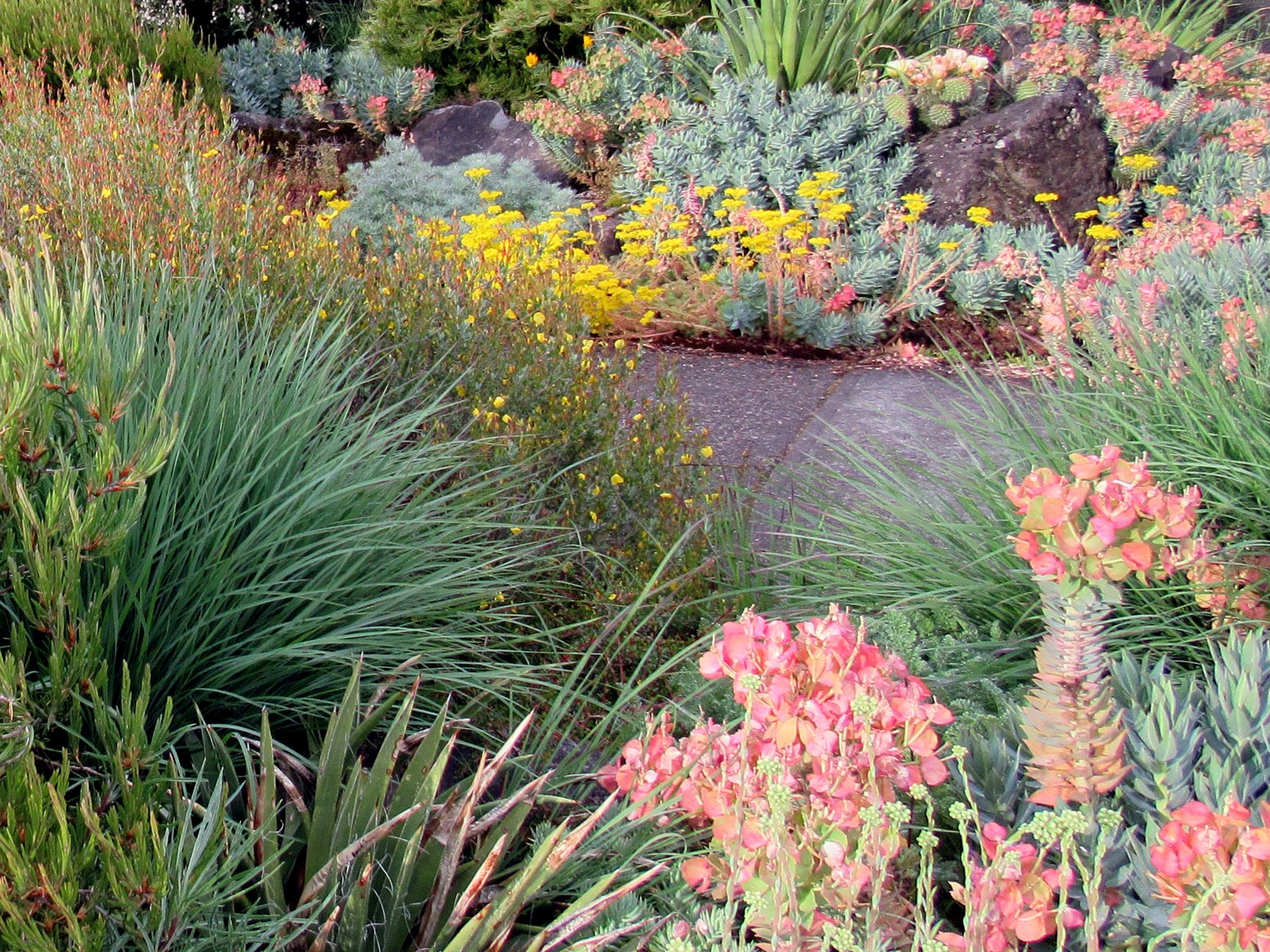 Greg Shepherd is an avid plant collector and nurseryman. Together with Paul Bonine, Greg is the co-owner of Xera Plants, a retail nursery and wholesale grower based in Portland, Oregon that specializes in climate-adapted plants for gardeners in the Pacific Northwest.

I’ve been gabbing with Greg for years. Back when I owned Fremont Gardens, a small specialty nursery in Seattle, Xera Plants was one of my prime suppliers. Orders delivered by Greg were always an occasion to chat about new plants and compare notes on the growing season. To this day, my garden still contains many signature Xera plants, and no visit to Portland is complete without a visit to this trusted purveyor of choice and often hard-to-find horticultural treasures.

I was delighted when I got the chance to visit Greg’s personal garden and catch up. 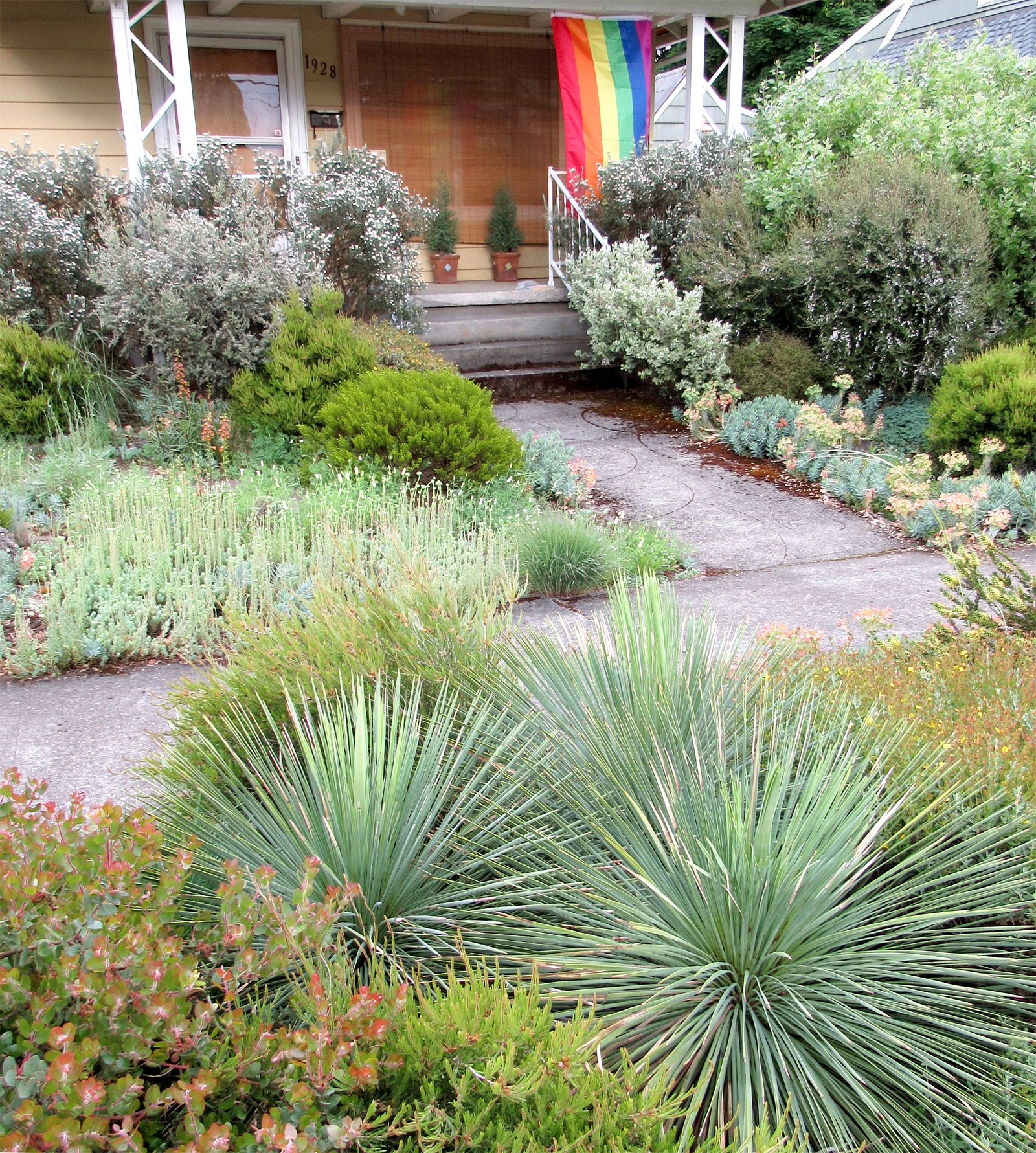 Greg and his partner Christian Sledd live in NE Portland, an area of the city that’s prone to punishingly cold winter winds that spill into the neighborhood from the Columbia Gorge. They moved into their home in the fall of 2011; work began on the garden almost immediately.

This is the fourth garden that Greg has created. I was surprised—and comforted—to hear this expert plantsman confess, “It’s easy to get overwhelmed when planting a new garden, and even easier to end up with an over-planted mish mash of plant types and styles.”

In his previous garden, Greg limited himself to using plants from Oregon and California. “I found the restraints made the plantings more cohesive, and the challenge made the process fun as well,” he recounted. 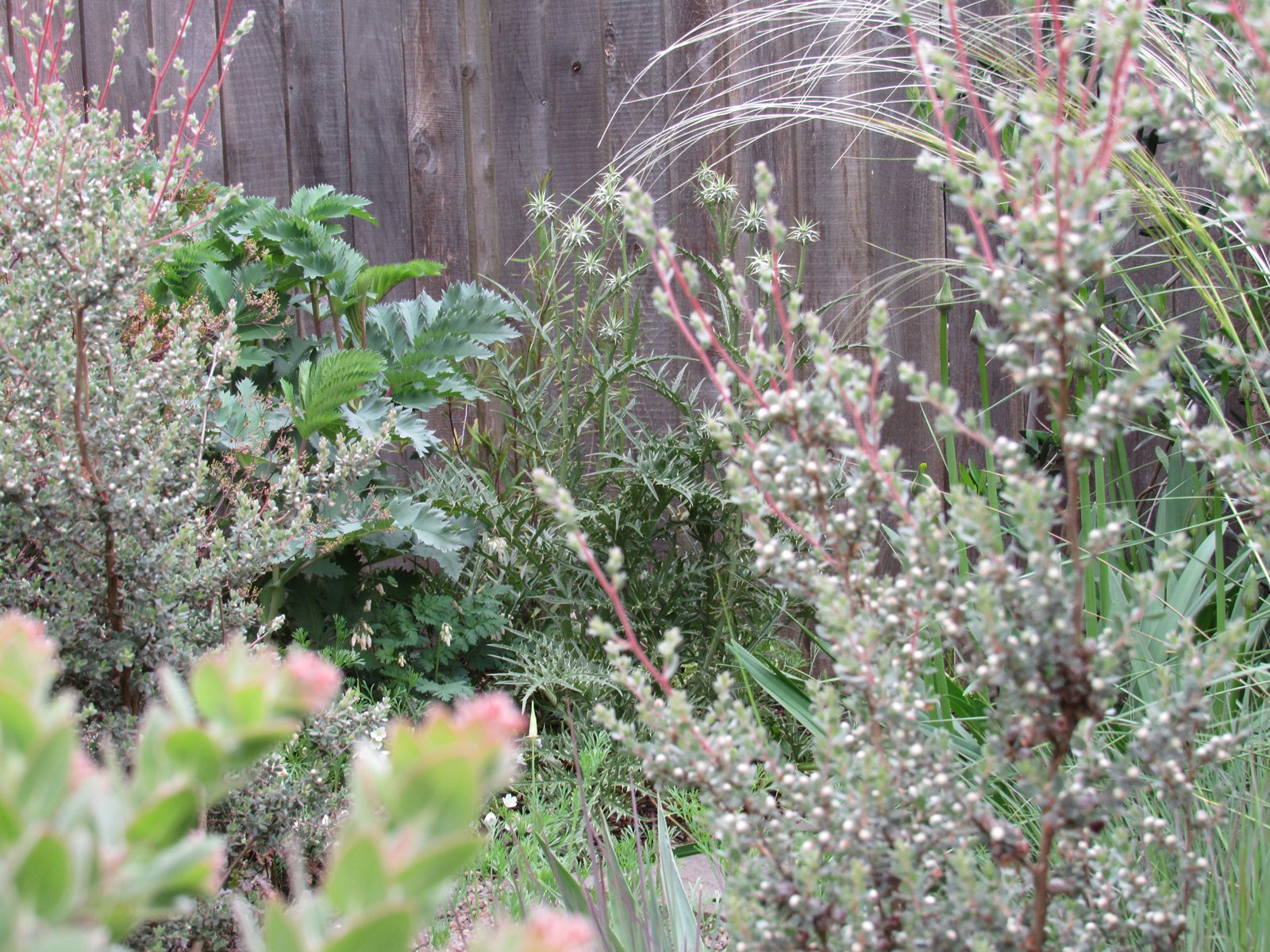 Cool colors and fine textures in the back garden include Leptospermum lanigerum ‘Silver Form’ with blooms of Stipa barbata with contrast provided by the serate foliage of Melianthus major ‘Antonow’s Blue’. Photo: Greg Shepherd

This time around Greg upped the ante and decided to work within the following parameters:

“I wanted to create a trial plot for many of the plants we grow at Xera and that I feel are underused here in the Northwest,” he observed. “Limiting my choices challenged me to think outside of the box.”

Choosing only plants that would thrive without winter protection forced Greg to forgo planting many of his favorites that he’d grown in milder gardens, including annuals and tender tropicals, to say nothing of giving up dozens of potted plants that he used to shelter from inclement conditions. Focusing on plants that would flourish with minimum input was critical to Greg’s work/life balance. “As a busy entrepreneur I always ended up resenting the time I spent maintaining my previous gardens.” 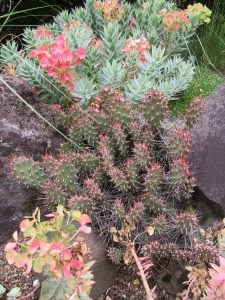 The result is a beautiful garden that syncs with a busy life yet satisfies the curiosity of a passionate plant collector and grower.

The landscape, which sits on a typical 50- by 100-foot lot, is furnished with Western natives and adapted plants from similar climate regions with winter wet/summer dry weather cycles. The color palette is subtle and sophisticated; bronze, gold, and soft sunset hues in the front yard, and lots of silver foliage and white, pink, and blue flowers in the back. Rather than creating sharp contrasts with bold foliage and bright colors, Greg composed a mix of fine textures, a decision informed by his time botanizing throughout the West. “I wanted to mimic a natural environment, where you often see many similar textures and forms melded into a cohesive wash of color and form,” he said.

Early in the process, Greg and Christian discovered that a large big-leaf maple anchoring the entry was mostly hollow and rotten. It would have to come down. What was going to be a shady front yard filled with Northwest natives was now going to be exposed to hot blazing sun. “Luckily we realized this before planting had begun,” Greg mused. Forced to adapt, their concept shifted to creating a chaparral-like landscape, densely planted with a mix of resilient drought tolerant plants.

But first they had to remove a dozen overgrown, poorly pruned rhododendrons that formed an impenetrable barrier across the front of the house and down the side yard. Once the “grueling” shrub removal was accomplished, beginning in October, they sheet mulched the existing lawn in anticipation of planting the following spring. As Greg noted, “Sheet mulching over winter is a slow process; you’ll get much faster results if it’s done at the warm end of the wet season, in May or June.” They covered the lawn with cardboard and topped it off with a 3- to 4-inch layer of a 3-way mix. “I didn’t want compost because I knew I’d be growing a lot of natives and low-nutrient requirement plants; and I didn’t use bark because I knew I would be double digging and changing the grade in some areas.” 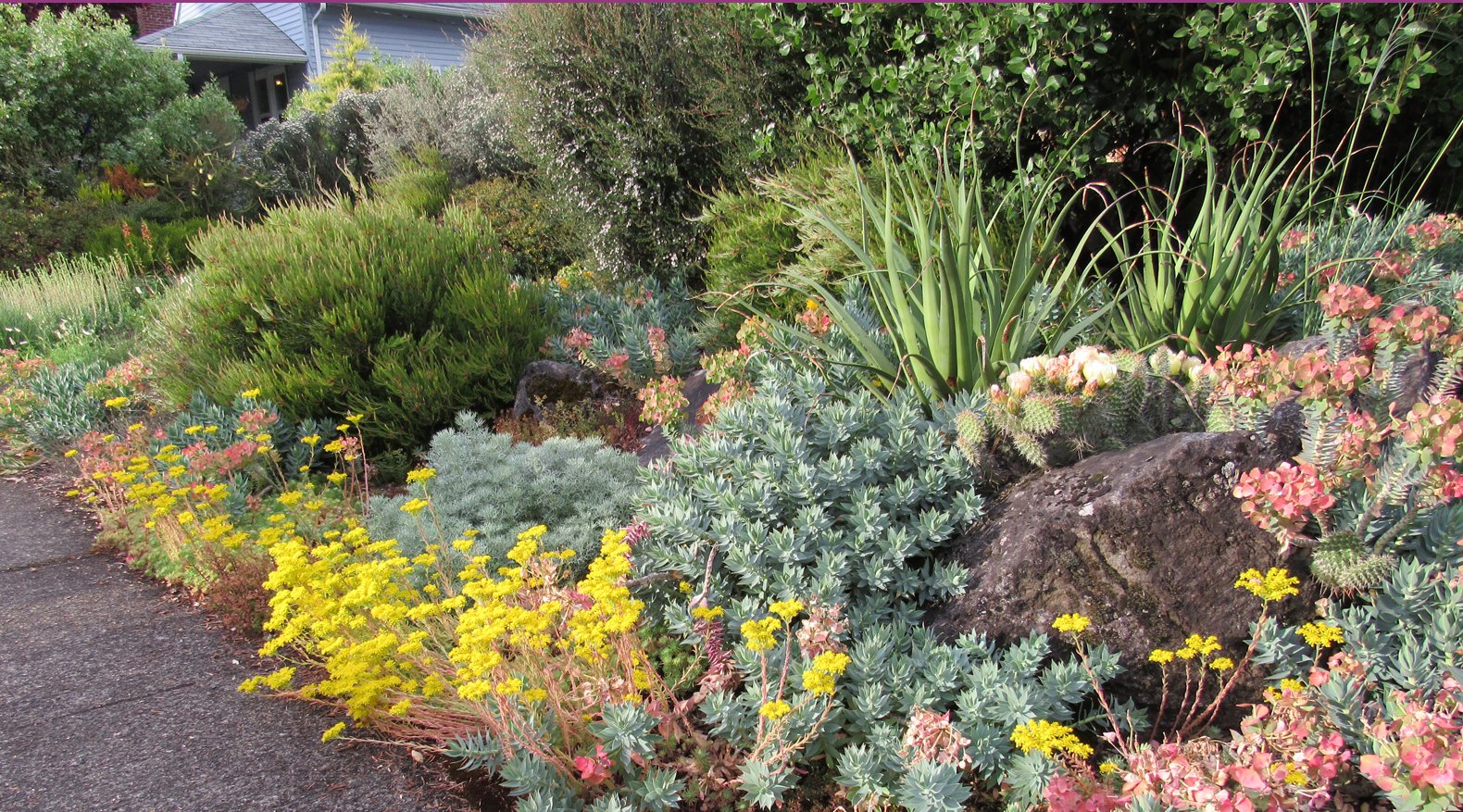 A built up area on the south edge of the front garden amended with pumice creates optimal growing conditions for plants that require fast drainage, including Agave bracteosa and Opuntia polyacantha (both at top right), skirted with Euphorbia rigida and Sedum forsterianum (in bloom). Photo: Greg Shepherd

No soil amendments or fertilizers were added as they began digging and turning the soil—especially important in the compacted areas that had been covered in turf. The only exception was a bed destined to host Opuntia, Agave, and Yucca where Greg amended the native soil with fifty percent pumice to provide extra drainage around the crowns of the plants to help them establish in the wet winter climate.

Planting began in May of 2012, continued throughout the heat of the summer, and finished up in August. Knowing his goal was to test plants for drought tolerance, Greg decided against installing an irrigation system. “To establish new plantings, I hand watered every two to four days for the first few weeks, then tapered off to once or twice a week once the plants started to root in,” Greg recalled. “Now, 6 years later, I hand water specific plants about every two weeks in the summer. But most of the large shrub plantings haven’t been watered since their first season.” 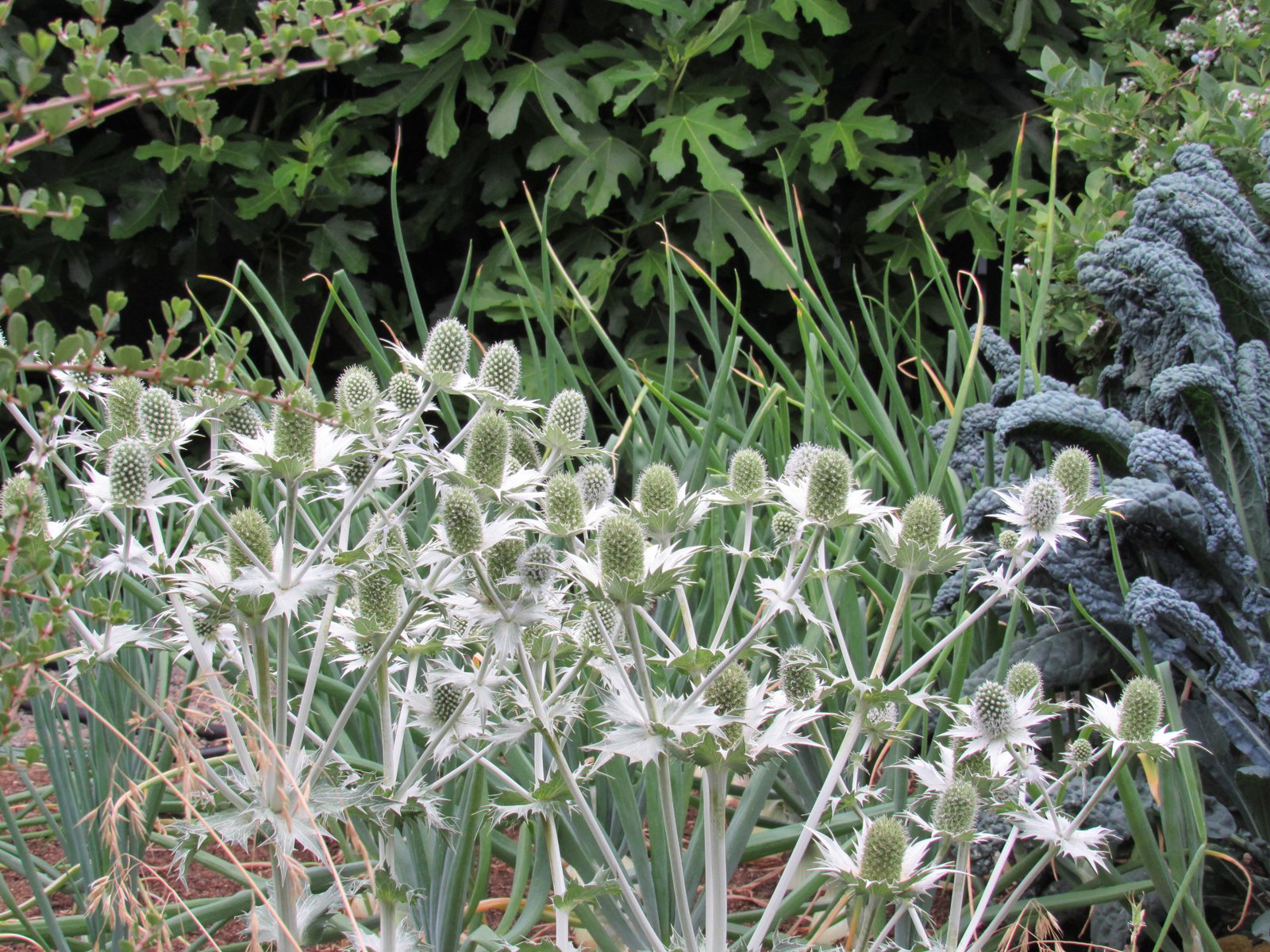 When asked to name his favorite plants and those that have proven exceptionally successful in his latest garden experiment, Greg tops the list with Arctostaphylos of any type. “My favorites are A. manzanita ‘St. Helena’ and ‘Austin Griffiths’.” Greg has trained beautifully sculptural specimens in the front yard into tree-like forms. “The plants have grown eight feet tall and as wide in just six years. They are completely unfazed by the hottest weather, and even rebounded intact after being bent to the ground by an ice storm,” he enthused. Other Arctostaphylos favorites include A. ‘John Dourley’, with a low, flowing form clothed in blue foliage that emerges copper-orange and blooms from December to March. And A. silvicola ‘Ghostly’, with amazing nearly white new growth and a soft, upright form.

I got the definite impression Greg’s list could go on and on. 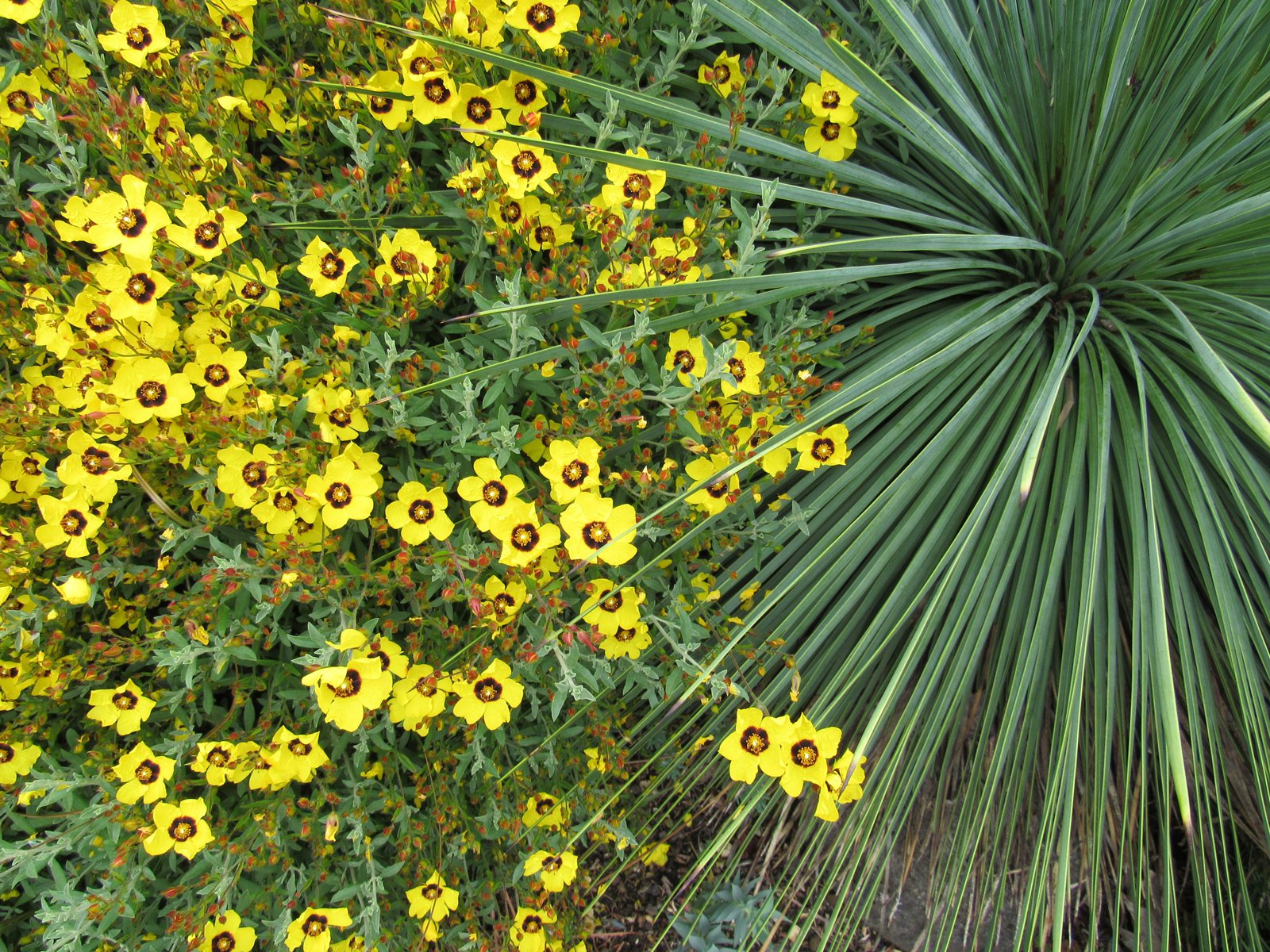 Beyond manzanitas, Greg had nothing but praise for the following choice plants:

Even with all his pro knowledge, Greg told me he’s had some failures. “Agastache. Love them, but they failed to establish in most areas—just too dry!” he lamented. “I’ve found that perennials are the most difficult plant type to integrate into a dry garden. As the garden matures, most perennials can’t compete for scarce summer water with the increasingly aggressive roots of large shrubs.” 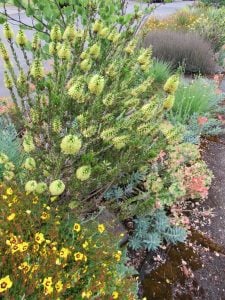 Instead, Greg has embraced self-sowing plants that move about the garden, often planting themselves in unexpected combinations, to provide shifting seasonal interest. Some of his favorites include Euphorbia rigida with cheery, early season flowers, sun loving Digitalis obscura with sunset orange flowers, and West Coast native annuals like the low growing white form of California poppy (Eschscholzia californica ‘Alba’), and meadowfoam (Limnanthes douglasii and L. alba).

Other perennial successes include Sedum sediforme ‘Spanish Selection’, with tall showy stems of the softest yellow flowers. Among grasses Greg extolled the powder blue foliage of Schizachyrium scoparium ‘The Blues’ that takes on purple highlights late in the season, and the “over-the-top” inflorescences and curly seed heads of Stipa barbata.

In shadier parts of the garden Greg’s go-to plants include Dicentra formosa ‘Langtrees’, a selection of native bleeding heart with silver foliage and white flowers. “It’s a great colonizer and will just go summer dormant if it gets too dry, but returns vigorously in spring.” Festuca rubra ‘Patrick’s Point’ is a West Coast native that slowly spreads to form large colonies of powder-blue foliage. “Makes wonderful soft drifts under shrubs and perennials.”

Pacific Coast hybrid irises (Iris ×pacifica) thrive under shrubs and in an open north exposure. “Flowering is brief, but makes mid spring so special.” The native licorice fern (Polypodium glyceryrrhiza) remains lush and green all winter, growing just as well in the ground as it does on vertical surfaces. “Without irrigation licorice fern goes summer dormant, perfect for under large shrubs like manzanita where you don’t want to water.”

Only a couple of hebes, ‘Karo Golden Esk’ and ‘Hinerua’, have survived hot, dry summer conditions in the garden. Some failed from getting too dry, others perished after being watered in hot weather. As the knowledgeable nurseryman observed, “Many alpine and West Coast native plants just can’t tolerate moist soils and high temperatures.” Exceptionally cold winters have taken a toll as well. “I miss my restio (Ischyrolepis subverticillata). And my spineless prickly pear (Opuntia cacanapa ‘Ellisiana’) snapped into pieces and turned to mush after a heavy snow and ice storm a few years ago.” Prolonged periods when the subfreezing east wind whistles through the garden can also lead to bark split on some zone 8 plants.

Such is life in a plantsman’s garden where curiosity, observation, and knowledge cultivate success. 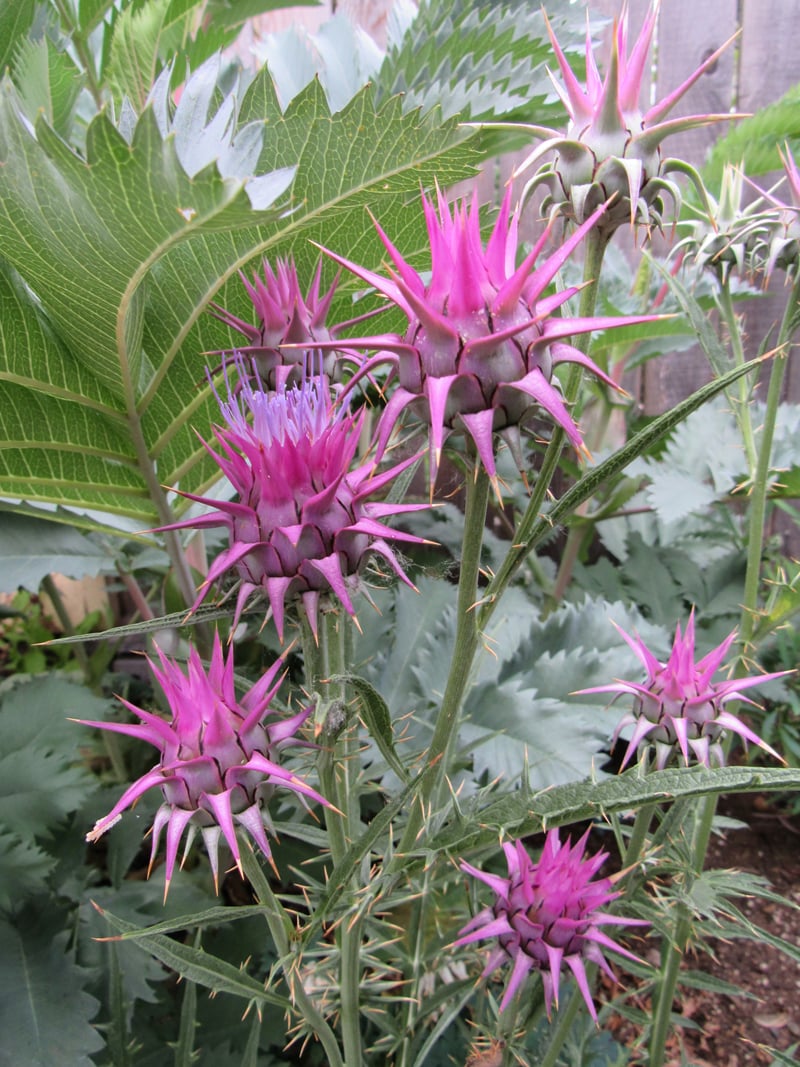