Sit Next to a Plant – It’s Good for You 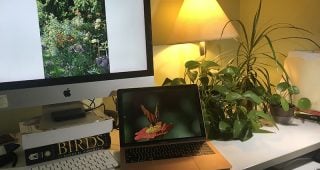 Plants near a computer work station are relaxing. Ellen Zagory

Does having a small houseplant on your desk improve your performance at work? Maybe: it seemed to do so for a group of boys (but not girls) in Seoul who were asked to solve math problems while a small green potted plant was either present or absent on the desk in front of them. Not only was both multiplication AND division required (yikes!), the kids (ages 10-13) were also outfitted with stylish electroencephalograph electrodes, to measure brain activity. The boys (only) showed evidence of slightly increased concentration.

On the other hand, when they were asked about how they felt in the presence of the plant, both boys and girls reported that the plant improved their feelings of “being comfortable” and “being relaxed.” There is some irony in that the plant which was used for this experiment and shown to improve human performance was Epipremnum aureum (pothos), a species that is not so good itself at its own job of being an angiosperm plant. It routinely refuses to flower in cultivation. Nevertheless, these results add to a small heap of published studies that indicate that simply spending time next to a plant—anything from a small houseplant to a mature tree—is a good idea, whether or not you are forced to do math.

The Superiority of the Dandelion, Partially Explained 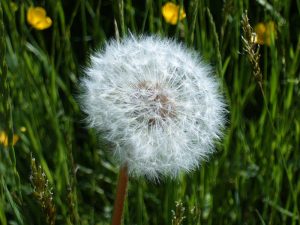 We know that it is impossible to eradicate and that it, along with the cockroach, will survive any human-caused cataclysm. And now a group of researchers in Scotland has explained at least one of the dandelion’s secrets: the flight mechanics of its fluffy seed-head. As most children notice, each dandelion seed hangs on its own bristly parachute, known as the pappus. [Bonus question—guess how many bristles make up each pappus?] A stunningly meticulous experiment (which included a custom-made tiny wind tunnel! lasers! artificial bristled micro-discs!) revealed that the pappus is optimized for flight in a very specific way. As a dandelion seed falls through the air, the pappus generates a stable vortex (a bubble of spinning air) that faithfully follows the pappus in its wake, a little distance away. This “separated vortex ring” is neither attached to the pappus nor is it violently shed, as would happen periodically if the seed were equipped with a solid disc “parachute.” The pappus thus provides four times the drag force of a solid disc, and it stabilizes the seed in flight far better than other options, like the wing of a maple seed.

The authors note that such plumed/bristled devices are likely to be most beneficial for small light things, and not only plants: they note that the bristle-lined wings of thrips (yes, the hated greenhouse pests) may provide those tiny insects better flight characteristics than solid wings would. It all comes down to the “Reynolds number,” a physics concept that describes the nature of flow in fluids. While we (large) humans routinely overlook this concept, it is absolutely critical for tiny organisms for whom it governs their motion through fluids, from plankton floating in the ocean to dandelion seeds floating down into your yard.

Oh, and about that bonus question: on average, each pappus contains 100 bristles, each about seven millimeters long.

(Or, plant grafting can be even more fun when an “interscion” is used to connect unrelated plants) 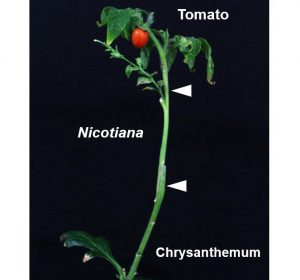 Use of an “interscion” to join tomato and chrysanthemum plants. Michitaka Notaguchi

What does it take to successfully graft one plant onto another? Well, at a minimum, the cells on both of the cut surfaces must first adhere to one another and then actually grow and divide, and the vascular systems of the two plants must somehow interconnect. The very first step in this process requires a set of enzymes—cellulases—that can disassemble and reconfigure plant cell walls. A group of researchers from Japan showed how one such enzyme is produced in response to grafting, and that interfering with this enzyme (by silencing the genes that control its production) will lead to graft failure. But the researchers went further: the model organism they used in the study, Nicotiana benthamiana (the “notorious Nb”), is a tobacco relative from Australia, which appears to be able to graft with a wide variety of non-related plants. So, they stuck a tomato scion on top of a Chrysanthemum rootstock, with a short “interscion” of Nb serving as the intermediary “bridge” between the two plants—and it worked: instead of a chrysanthemum flower, they got tomatoes! They attributed this success to the ability of Nb to produce the enzyme both when grafted to a close relative (tomato, in this case, in the same Solanaceae family as Nb) forming an “intrafamily graft” as well as when grafted to the completely unrelated Chrysanthemum (aster family), to which it forms an “interfamily graft.”

The authors are predictably modest about the implications of the study, but we do not need to be: imagine the freaky grafted vegetables, “fruitables”(TM) or “flowertables”(TM) that might be possible: BroccoYam*, WatermelonTato, ChrysantheRadish, etc. etc. (“Eat your BroccoYam, Billy, or you get no dessert!”)

*That “yam” is a sweet potato, of course; actual yams would not work, as monocots cannot be grafted.