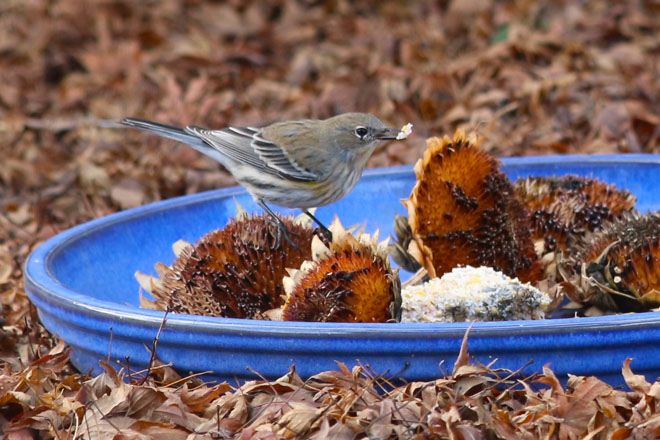 It’s estimated that over 82 million people in the United States enjoy feeding birds. I am one of them. Though always a bird appreciator, I became an enthusiast after joining Cornell Lab of Ornithology’s Project Feeder Watch. I have honed my I.D. skills and now can easily recognize the 25 or so regular visitors to my backyard by their personalities and habits, and I can even distinguish between many LBBs (little brown birds) that visit my yard.

Warning:  Birds are a gateway species and may be habit-forming. While birds themselves are not addictive, learning about them may result in a total redesign of your back yard. Most of Seattle is dominated by a few ubiquitous or invasive bird species such as European Starlings, Rock Pigeons, and House Sparrows. But by introducing native plants, trees, shrubs, and grasses, a yard will soon host a more varied and native avian community including birds such as Northern Flickers, Black-capped Chickadees, Spotted Towhees, Bushtits, Yellow-rumped Warblers, Golden-crowned Kinglets, Red-breasted Nuthatches, Barn Swallows, Cedar Waxwings, and Bewick’s Wrens. Native plantings attract both birds and the insects that have evolved with them; in fact, native plants provide nearly eight times the amount of insect food for birds as exotic plants.

In addition to food, native plants offer nesting sites and cover for birds. This not only benefits the birds and other wild urban creatures, but humans as well. When we plant trees and shrubs that provide habitat for birds and grow flowers and fruits that will attract diverse pollinators, we are healing our fragmented and degraded urban spaces as we nurture our relationship with the ecosystems in our back yards. Gardeners will be delighted to know that Barn Swallows get 99 percent of their diet from flying insects. They eat flies of all types and also enjoy munching on beetles, bees, wasps, ants, butterflies, and moths. A single swallow can gulp 60 insects an hour while performing its graceful aerial maneuvers.

Another insect lover is the Northern Flicker. Unlike other woodpeckers, flickers prefer to forage on the ground for ants and their larvae. Flickers eat more ants than any other North American bird and have a sticky tongue that extends almost three inches beyond its beak to help them do so. Flickers also avidly engage in “anting,” using the formic acid produced by ants to keep their feathers parasite-free. Often, after a rainstorm, I have watched in a mixture of awe and dismay while a flock of American Robins descend on the garden and go wild pulling worms. Charles Darwin recorded that an acre of garden soil could contain more than 50,000 earthworms and yield 18 tons of castings per year. His estimates were actually quite low. Research shows that in 100 square feet of garden soil, earthworms may bring from four to eight pounds of dirt to the soil surface each year and, given favorable conditions, one acre of land can contain more than a million earthworms. This is good to know since a baby robin will eat approximately 15 feet of earthworms in its first two weeks—and worms are not even their main food. Robin parents need to feed voracious nestlings every 15 to 20 minutes during daylight hours, stuffing them with insects, worms, and berries. Robins fledge before they can fly, which is not an effective strategy; only 40 percent of nests produce young and only 25 percent of fledged robins survive to November of their first year. Robins make up for this by having three broods, which accounts for why I often feel protective of my worm population.

Crows, along with their cousins the jays, magpies, and ravens are a member of the Corvid family and are considered to be the most intelligent of bird species with a brain-body ratio equal to other non-human primates. Crows use tools, and these clever tricksters can recognize human faces and develop their own dialects. Crows are also known to have excellent memories and good family values; they mate for life and they are attentive parents. Urban crow families may have up to 15 individuals, and fledglings may stay with their parents working together to help raise siblings for up to six years. One of my favorite perching birds is also the tiniest. The Golden-crowned Kinglet weighs in at a mere five grams or as much as two pennies. Fueled by insects, the kinglet keeps its body temperature at a toasty 111°F and has a thick layer of insulating down feathers. Kinglets forage in fir and spruce trees and they are constantly in motion, only stopping for a second or two at a time. A kinglet will starve and freeze to death if it cannot find enough food, so must eat three times its body weight in insects each day. Like hummingbirds, kinglets use spider webs to create their nests, so a yard full of spiders and moths will increase your chances of seeing these Ruby and Golden-crowned dynamos in action. Black-capped Chickadees are unique in the bird world:  In order to get ready for winter, chickadees do a brain-wipe to clear old memories, which results in a whopping 30 percent expansion of the memory section of their hippocampus. In the fall, chickadee diets switch from a diet of mostly caterpillars and other insects to mostly seeds. Then, in October, their neural expansion peaks, allowing them to remember their thousands of seed hiding places. The farther north a chickadee lives, the larger their hippocampus. Not only are Alaskan chickadees able to store more food than their southern cousins, they also remember their stash locations better.

Cooper’s Hawks are thriving in Seattle and are keeping nuisance birds in check. Researchers found that urban Cooper’s Hawks focus nearly exclusively on three common species of relatively large prey: European Starlings, Mourning Doves, and Rock Doves (or city pigeons). They found that smaller prey, such as Oregon Juncos, were completely ignored or seldom attacked even though they are common. We welcome raptors into our back yard, and we are always thrilled to see eagles, hawks, owls, osprey, and other raptors keeping it wild in our neighborhood. Ancestors of modern birds originated on earth 150 million years ago and have survived many calamities, including the great dinosaur die-off at the end of the Cretaceous period 66 million years ago. Today, birds are facing greater threats than ever before due to climate change, free-roaming domestic cats, pesticides, and loss of habitat. Climate change is considered the single greatest threat to birds in North America. Audubon’s 2014 Birds and Climate Change Report predicts that the Pacific Northwest will lose 32 percent of its bird species in the near future due to the effects of a changing climate on the food web. In the United States, another critical threat to birds is our 100 million free-roaming cats. Domestic and feral cats kill approximately 2.4 billion birds annually along with 12.3 billion mammals and untold numbers of amphibians and reptiles. Well-meaning cat owners are often blithely unaware of what their pets are up to when they give their kitties unsupervised outdoor access. Note: the International Union for the Conservation of Nature (IUCN) lists domestic cats on 100 of the World’s Worst Invasive Alien Species. Habitat loss, degradation, and fragmentation from logging, agriculture, and urban development have severe consequences for migratory birds and native songbirds. In a 2012 study, the Washington Department of Fish and Wildlife found that over 35,000 acres of wildlife habitat are degraded or destroyed each year. With more land being developed and less land set aside, it is critical that we conscientiously create urban habitat corridors while we strive to increase native plantings in our parks, alleys, parking strips, and back yards.

Gardeners and landscape architects know that the way we design our urban green spaces can have a positive impact on our health, quality of life, and spiritual well-being. An urban backyard can be a haven for local wildlife by providing fresh water and native plantings that provide food, shelter, and structural diversity. Invite birds into your back yard and then sit back and enjoy the show.