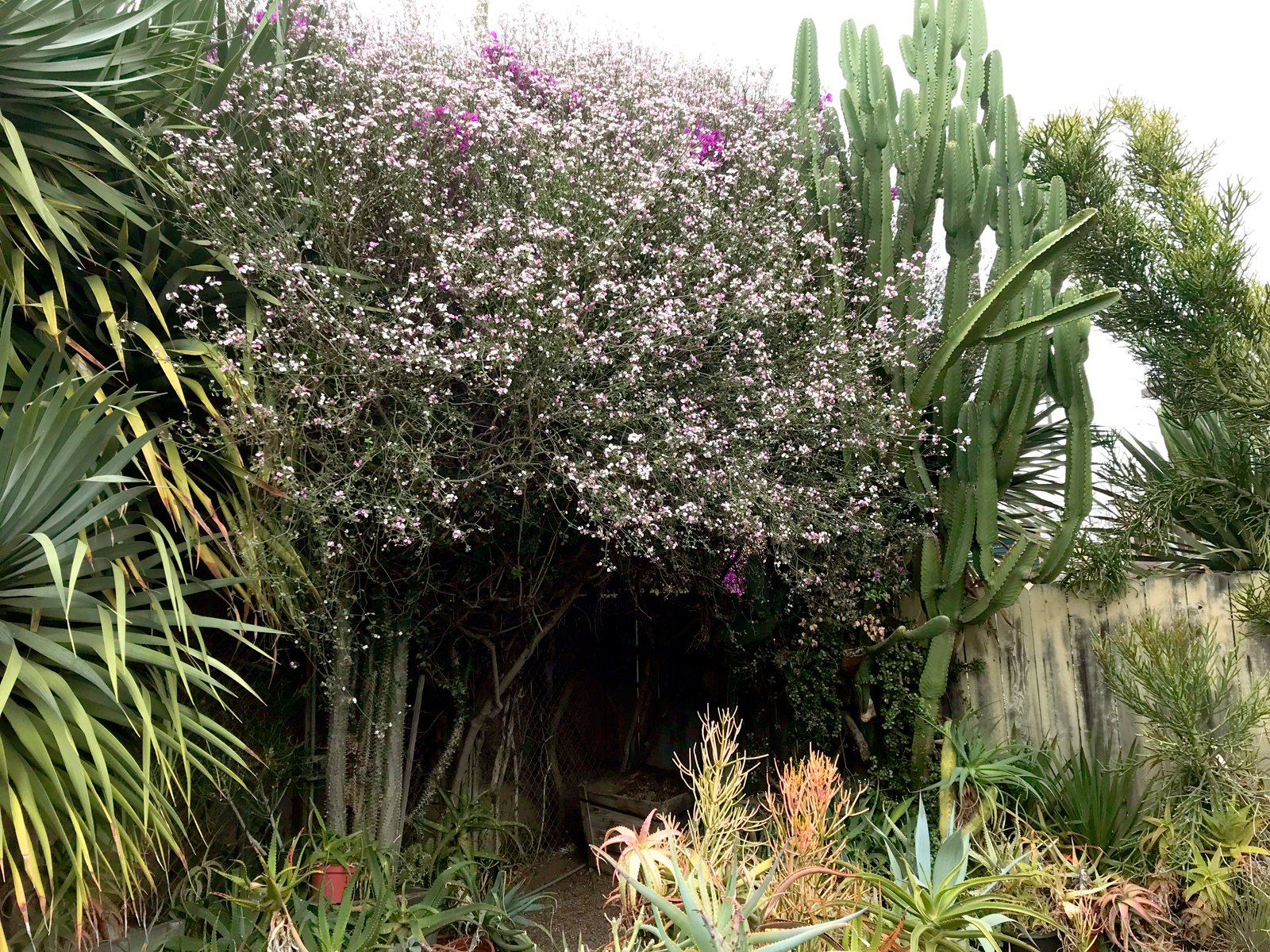 Many plant species native to the Baja, California (Baja) Peninsula have proven tough enough to handle the worst conditions gardeners can muster north of the border, including drought and heavy soils. Several plants from Baja are not only worthy for use in Southern California gardens, but will often stop traffic at peak bloom.

As our climate continues to warm, utilizing plants drawn from nearby, southerly regions will become a key adaptive strategy that offers drought tolerance, habitat value, and new aesthetic opportunities. 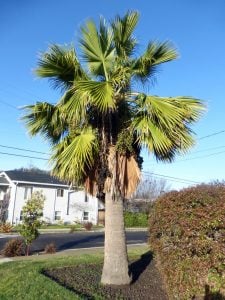 TREES: Like most native trees north of the border, larger trees in Baja are found along stream sides or in the mountains where higher levels of water are present. The list below is focused on smaller, more drought tolerant specimens, though all may reach significant sizes with time.

Guadalupe palm (Brahea edulis)
Endemic to Guadalupe Island off the coast of Baja, this rare and graceful palm is slow growing to 25 feet, has self-shedding leaves that lack dangerous spines and, unlike most native palms, palatable fruit. For those who love iconic California palms, the Guadalupe palm lacks most of the problems associated with Mexican fan palms. 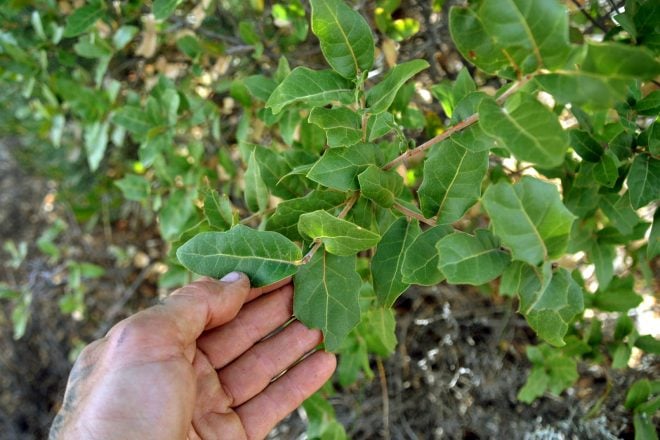 Peninsular oak (Quercus peninsularis)
This is a small, evergreen, multi-stemmed oak tree endemic to medium elevations in Baja mountain ranges. Growth peaks at around 30 feet, and the tree is famous for its “sweet” acorns that need little processing to make them edible. With pretty, elliptical leaves and a handsome form, this is an oak tree that should be tried more often in Southern California.

Palo blanco (Lysiloma candidum)
A beautiful, white-barked tree in the pea family that produces small clusters of white flowers from March through May, filling the air with a spicy sweetness. Extremely drought tolerant and pretty, this tree is naturally multi-stemmed; fast growing to 25 feet, but can be trained into a standard form.

Tecate cypress (Hesperocyparis forbesii)
Drought tolerant and handsome, Tecate cypress is notable for being patio sized with fast growth to 25 feet that can be hedged, used as a windbreak, or allowed to form a canopy. Tecate cypress, the larval host plant for the Thorne’s hairstreak butterfly, is threatened by the increased incidence of wildland fires. Plant this tree and help preserve its genetic heritage. 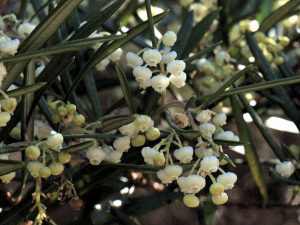 Baja birdbush (Ornithostaphylos oppositifolia)
Baja birdbush typically spreads to six feet and reaches six feet or taller at maturity, with beautiful red bark and, as the name suggests, is attractive to hummingbirds. The shrub, which is extremely drought tolerant but will tolerate light summer irrigation, is an important part of low chaparral in Baja where it is currently under threat from rapid urbanization. 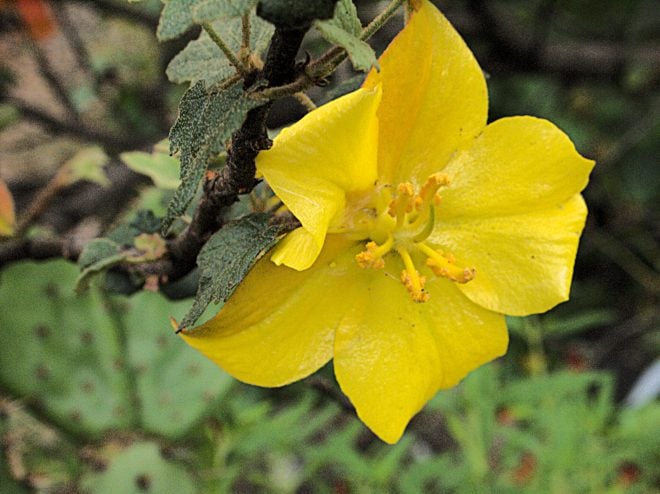 Mexican flannelbush (Fremontodendron mexicanum)
With naturally isolated populations in Southern San Diego County and NW Baja, Mexican flannelbush, a rare relative of the more common California flannelbush, grows in alluvial soils and sandy streambeds that are seasonally inundated. Given good drainage and zero summer water, the shrub blooms profusely with large yellow flowers from March through August, and will last many years; fast growing to 15 feet. Help keep the genetics of this rare shrub alive in your garden. 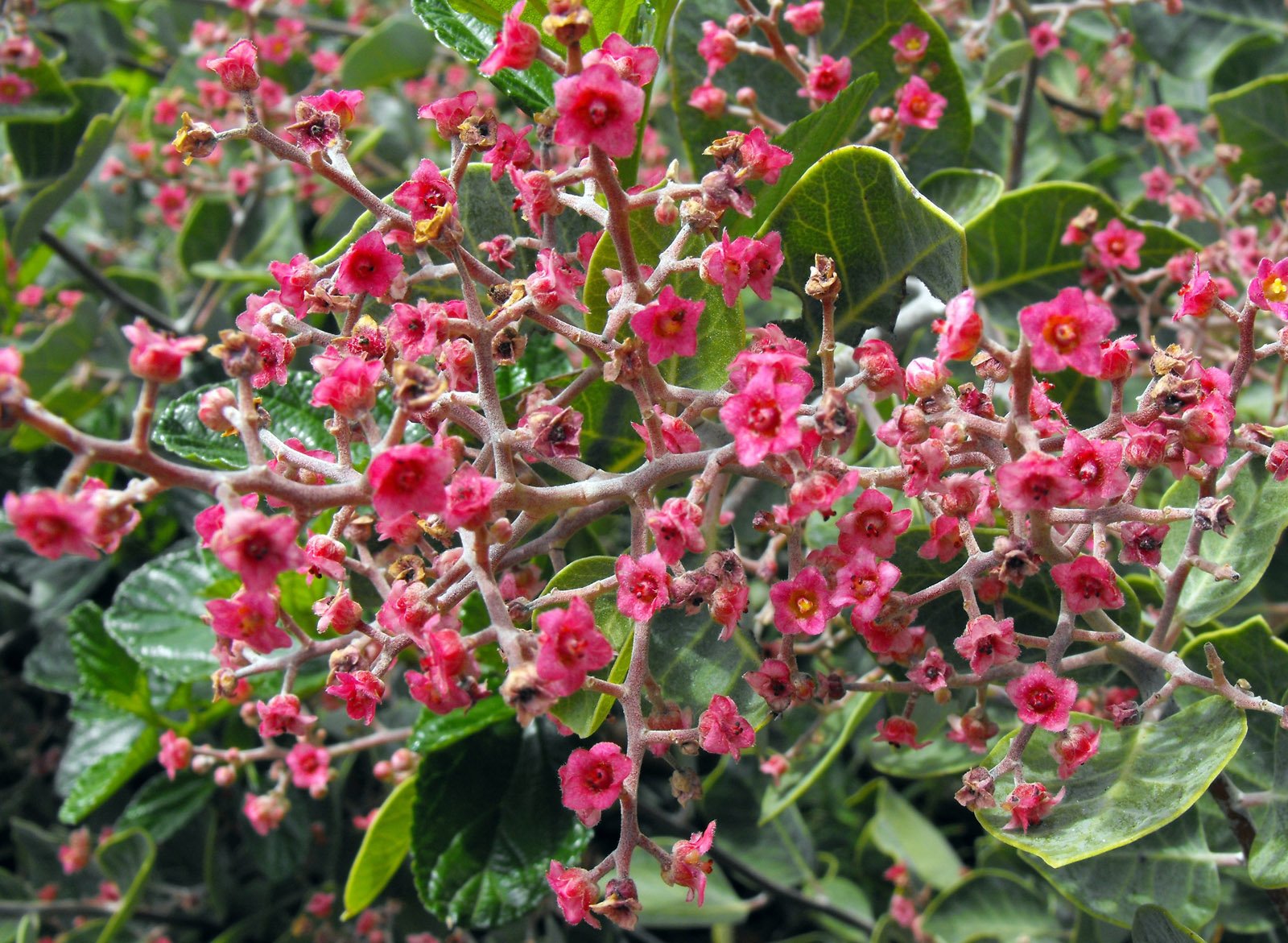 Pink-flowering sumac (Rhus lentii)
A superior garden subject with bright pink flowers in early spring set off against the grey-green leaves. The shrub has a compact habit (6 to 8 feet tall at maturity), and a spreading shape that looks naturally pruned—a fantastic choice for hedging in both formal and naturalistic gardens. In addition to these virtues, this sumac is also extremely drought tolerant and provides excellent habitat for native bees. Pink-flowering sumac is found only on Cedros Island and western portions of the Vizcaino Desert. 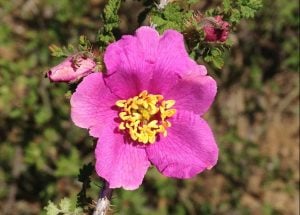 Small-leaf rose (Rosa minutifolia)
Reputedly having the smallest rose leaf in the world, Rosa minutifolia is sometimes excitedly described as the “xeric rose.” In fact, it is exceptionally drought tolerant, particularly if given a thick layer of organic mulch; under drought stress the plant defoliates, exposing a small thicket of woody, and extremely spiny stems. Unpruned growth will typically reach 3 feet by 3 feet or slightly larger. But like all roses, the shrub can be refreshed with a hard prune ahead of its winter growing season. Mulch and low irrigation will often keep this small shrub green and in full bloom from January through June or longer.

PERENNIALS & VINES: Woody perennials and vines provide much of the spring and summer character in drought tolerant gardens. Because Baja perennials are adapted to occasional monsoon rains, with light summer irrigation they resist summer dormancy and can have extended bloom periods. 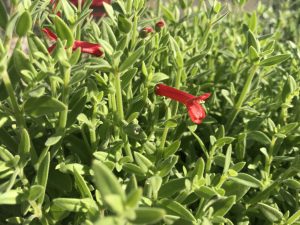 A close up detail of the blossoms and leaves of Gambelia juncea ‘Punta Banda’. Photo: Clayton Tschudy

Campo pea or Pride of California (Lathyrus splendens)
One of the most beautiful climbing peas in the world, Campo pea sometimes can be found growing out of rocky cracks with virtually no soil. Deep, wine-colored blooms on large inflorescences cover the plant at peak bloom. Provide excellent drainage and this easy pea will grow with little care for many years. Spoil it and it may be short-lived. 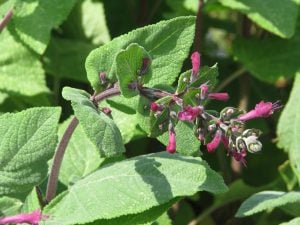 Baja pitcher sage (Lepechinia hastata)
While not a true sage, this plant looks like a hummingbird sage (Salvia spathacea) on steroids, up to three times larger with three-foot-long spikes of magenta-red flowers. Baja pitcher sage thrives in partial shade under the canopy of trees and appreciates soils high in organic matter. Try this plant in a dry bed on the east side of a house where little else provides drama; also an excellent specimen for shady pots. 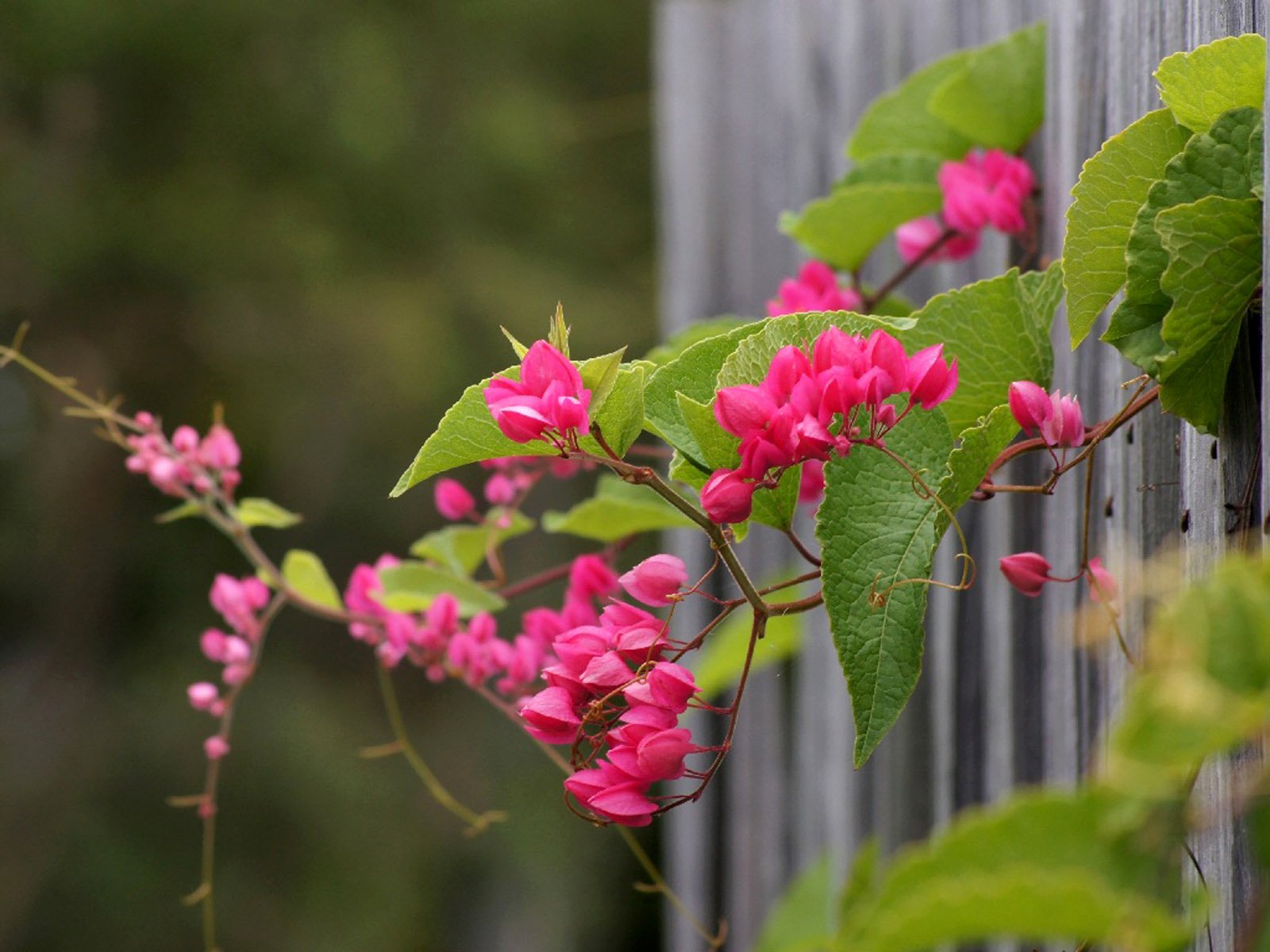 San Miguel coral vine (Antigonon leptopus)
Native from mid-peninsula to the Cape, San Miguel coral vine is a vigorous woody vine that produces large masses of pink blooms from May through fall. Reliable with low-to-zero summer water once established; low water improves bloom character. The plant can be cut back to the ground in winter or trained on a fence but give it room! Left unchecked coral vine can cover houses.

SUCCULENTS: Succulents become increasingly present going south from the California/Mexico border as the natural habitat shifts from the coastal sage scrub plant community to desert. Many Baja succulents from this transition zone work well within a planting of drought tolerant shrubs. 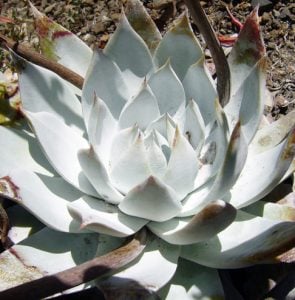 Britton’s liveforever (Dudleya brittonii)
This Echeveria relative forms a rosette of pointed silver leaves about a foot in diameter. It is exceptionally handsome and achieves its best form in gardens with low water to prevent summer dormancy. The flower stalks attract hummingbirds, but the plants are generally grown for the foliage. There are many Dudleya native to Baja, but this is among the best. With decent drainage this plant can be grown in every California garden.

Cherry blossom euphorbia or Baja spurge
(Euphorbia xanti)
This is an extraordinary and underutilized plant. The green, nearly leafless stems form a thicket over time, and can be trained into many shapes. Cherry blossom euphorbia is often grown as a vase-shaped shrub with growth to 6 feet, completely covered in showy pink and white blooms. Native bees and insects are drawn to the flowers, which bloom from October into late spring, making this a strategic pollinator plant during the winter months. This plant can also be trellised like a bougainvillea. Solana Succulents in North San Diego County has trained a cherry blossom euphorbia on a large fence. It is mesmerizing. 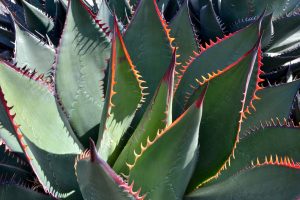 Shaw’s agave (Agave shawii)
The only agave that is native to the coast of California in the U.S., Shaw’s agave crosses the international border and extends up to Point Loma in San Diego County. It is a large, handsome agave that forms a basal rosette up to 4 feet wide, with a towering flowering spike to 12 feet. Easy to grow, completely drought tolerant, and tough, this agave produces pups, forming substantial colonies over time.

For more information on Baja native plants check out www.calscape.org, and the Baja California Plant Field Guide by Jon P. Rebman and Norman C. Roberts. Many of the plants mentioned in this article can be procured from California Native Plant Society (CNPS) plant sales, from local native specialist nurseries like Tree of Life Nursery in San Juan Capistrano, and occasionally from mainstream nurseries.