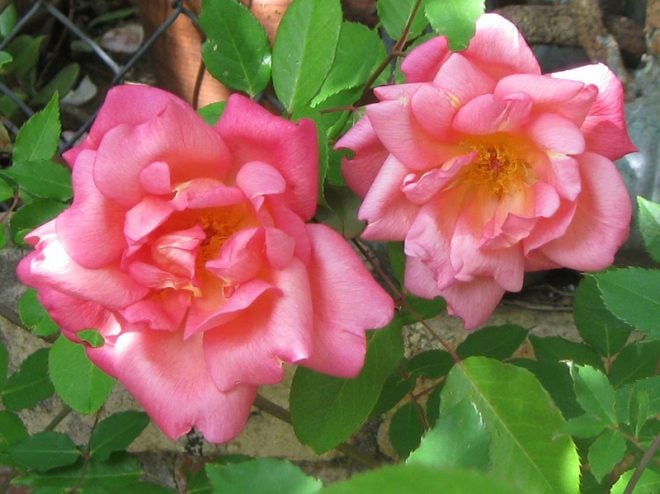 Roses have the unfortunate reputation of being almost insatiable drinkers of water. Granted, that is true for most modern roses, especially the hybrid teas and the floribundas. Irrigated often and briefly, they develop shallow roots easily injured by heat and drought. Deprive them of their water fix, and they will go into withdrawal, and perhaps shrivel into good-bye.

Watering deeply and long has been my strategy to keep my roses healthy. Deep watering encourages the rose roots to penetrate even farther into the earth. A thick layer of mulch keeps water from being lost by evaporation. Think of the roots rather than the bloom, and all should go well. Roses with deep roots acquire resistance to periodic drought.

Because of frequent droughts and water shortages in the West, gardeners need to do more to conserve water. Californians use nearly 40% of underground aquifers on average, more in dry years. Pumping of groundwater leads to dropping water tables, causes wells to run dry, and necessitates digging even deeper. Land subsidence in portions of the San Joaquin Valley is up to a foot a year due to excessive pumping. Long-term water-level declines have also concerned Oregon and Washington, especially in arid and semi-arid areas. The intrusion of saltwater along the coast increases when pumping of coastal groundwater reduces flow toward the ocean. It makes sense for rose gardeners to grow more drought-tolerant roses.

I know of only four hybrid teas that are fairly drought resistant: the old apricot-pink ‘Madame Abel Chatenay’ of 1895, the lovely red-yellow-coral-pink-white ‘Talisman’ of 1929, the climbing version of the famous ‘Peace’ of 1950, and ‘First Prize’, a pink rose with enormous flowers and prickles (1970).

Several classes of roses exist that on the Pacific coast—and elsewhere—are drought-resistant. Native wild roses are among them. One has only to ramble in the hills and draws of California to chance across these species roses and certain cultivars still thriving where homesteads and Gold Rush villages once stood. 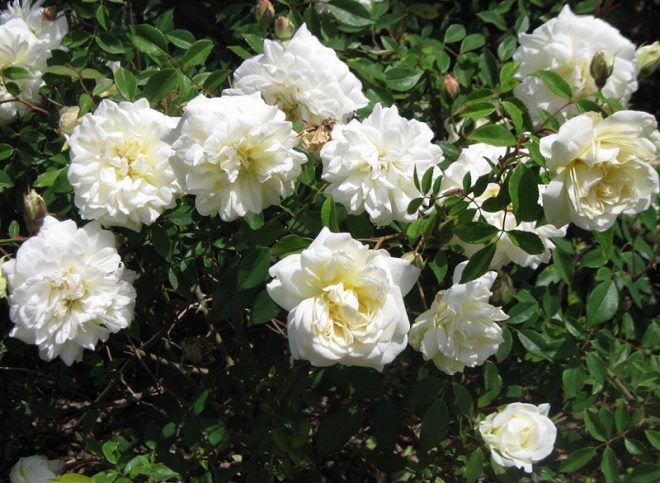 Those true survivors are tea roses, noisettes, and Chinas. Like most plants, roses do require some water, but many of them, like the teas and noisettes, perform well with minimal irrigation, just a few gallons a month. The exceptions are, naturally, roses in containers. But heavy mulching means they will do with less water than most people think. My roses slake their thirst from soaker hoses for about two hours every ten days or so. Additionally, some time ago I began washing my dishes by hand in an enamel basin and, afterward, tossing the soapy water under rose plants. And prior to taking a bath, I allow the initial cold water from the hot tap to flow into a bucket and use that to water both houseplants and outdoor plants.

Tea roses (partly derived from early hybrid teas) are among the roses most frequently found in pioneer cemeteries, Gold Rush towns, ghost towns, abandoned farms, and waysides. Clearly, those teas were (and are) survivors, living totally at the whim of Mother Nature, with no one consistently watering or caring for them in any way.

In the 1930s, Francis Lester, a nurseryman near Watsonville, California, and his wife scoured much of the Gold Rush country, discovering many abandoned roses, especially teas like the pearl-pink ‘Duchesse de Brabant’ (synonymous with ‘Comtesse de Labarthe’); ‘Homer’, a cream-colored rose edged in pink; ‘Le Pactole’, a  pale, subtle yellow; ‘Marie van Houtte’, light yellow often flushing to a soft rose-pink in summer; ‘Perle des Jardins’, a clear sumptuous yellow; and ‘Dr. Grill’, pink with a copper cast. Lester also found ‘Bridesmaid’ and ‘The Bride’, both white, and California’s oldest cultivated rose, ‘Rainbow’. He also came across the climbing ‘Devoniensis’ of pale creamy yellow, often with quilled petals. These roses and many other teas are all still available today. 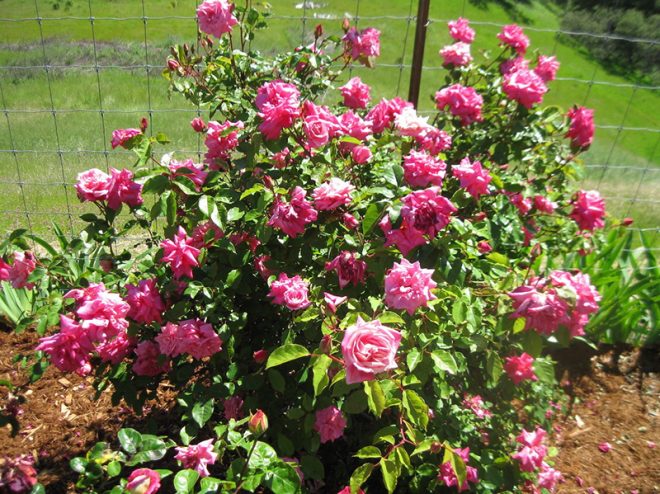 Rosa ‘Doctor Grill’ is an orange-pink rose that changes color as it matures on three-four foot shrubs.

Unlike hybrid teas, most tea roses are bushy and full—no naked legs appearing below a dress of leaves. Their stems are twiggy and arching or angular rather than stout and erect. With few exceptions, tea roses come in elegant pastel colors. The high-pointed center of the flowers was bred into the hybrid tea. Tea roses are easily grown from cuttings.

A few years ago, with several friends, I went on a bicycle ride on Skagg’s Island, between Novato and Vallejo, California. Suddenly, perhaps fifty yards from the side of the road, we spotted a large rose shrub. I plunged into the tall grass until I came to the plant in what seemed a long-ago forgotten yard. I recognized the class of rose immediately: a noisette. Examining flowers, stems, and foliage, and the telltale clove scent, I knew it to be the rose ‘Blush Noisette’. Noisettes originated in the United States. These roses put forth clusters of blossoms on flexible canes, most of them eight to twenty feet tall, ‘Crepuscule’ and ‘Mme Alfred Carriere’ being among the tallest. 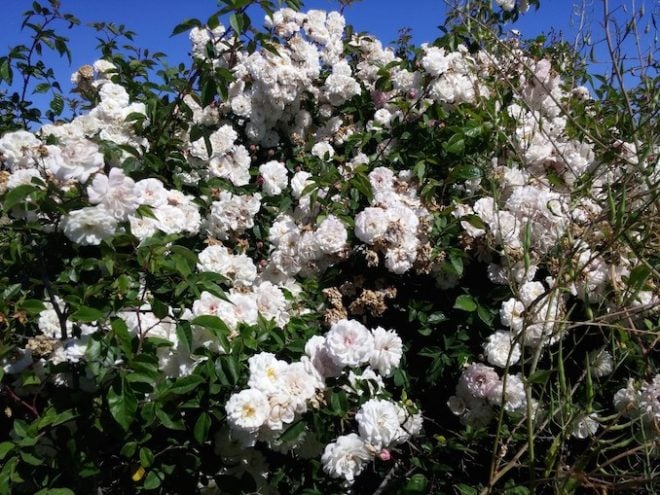 Rosa ’Blush Noisette’ has large clusters of flowers that start out pink and age to white.

Francis Lester also found ‘Blush Noisette’ growing in Gold Rush Country, and the beautiful climbing ‘Lamarque’, white with a pale-yellow center. Popular with the early settlers and still popular today, ‘Lamarque’ dates back to 1830 and reaches twelve to fifteen feet. Old specimens continue to stand in Fort Bragg (planted in 1850) and on an abandoned estate outside Santa Cruz. ‘Chromatella’, also called ‘Cloth of Gold’, was another discovery. Abandoned noisettes encountered by others in California are “Placerville White Noisette”, “La Nymphe”, and the two very fragrant “Secret Garden Noisette” and “Roseville Noisette” (the double quotation marks indicate the study name until the true name is ascertained).

Other roses that Lester found were the China roses ‘Old Blush’, the Chinese rose used to introduce repeat blooming into once-blooming roses; ‘Fabvier’, red with a pale pink center; ‘Cramoisi Superieur’ (synonymous with ‘Agrippina’), deep red; and ‘Comtesse du Cayla’, a blend of copper, orange, pink, and gold. ‘Archduke Charles’, red with a pink center but turning solid red in full, hot sun, was found by botanist Fred Boutin in Gold Rush Country some fifty or so years ago, along with some of the roses Lester had discovered. Another of Boutin’s finds is ‘Joasine Hanet’, an incredibly prolific and fragrant, mauve-red rose. 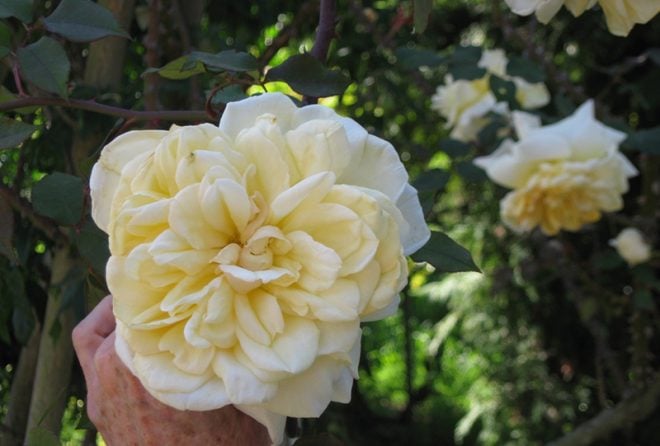 In addition to being drought resistant, Chinas, noisettes, and teas have the added benefit of requiring very little labor. Aside from the removal of dead, damaged, or diseased stems and canes, they do not need to be pruned. Speaking for myself, as my rose count grows larger and I grow older, freedom from the duty of pruning becomes a welcome gift. Best of all, once they are established (after a year or so), they become drought tolerant. An occasional deep soaking and mulch will do. To grow drought-resistant roses is to do ourselves a favor and to help conserve our dwindling water supplies.

Generic nurseries cater to hybrid teas, floribundas, and patio roses. In most cases, you will have to order China, tea, and noisettes online or over the telephone. Try any of the following nurseries to find a selection of wonderful roses: