“The best an artist can hope to do is to persuade those that have eyes to look also.”  – Georges Sand

The University of California Botanical Garden at Berkeley (UCBG) holds one of the largest and most diverse plant collections in the United States with an emphasis on those from Mediterranean climates. Sited on 34 acres in beautiful Strawberry Canyon above the main campus, the collection is arranged geographically, mainly featuring plants of documented wild origin.

Like all budget-challenged non-profit institutions, UCBG struggles to fund their work and the ongoing maintenance of the garden. ‘Natural Discourse,’ a collaborative exhibit curated by Mary Anne Friel and myself,  grew out of an invitation from Paul Licht, director of UCBG, and Chris Carmichael, director of collections, to use art to attract a new audience to the garden, and re-energize existing supporters.

Bringing sculpture into a botanical garden in an effort to engage the public is not new. But with an idea grounded in “discourse,” our goal for the exhibit goes deeper. Artists, staff, and the public were invited to start a dialogue about the meaning of botanical gardens in general, this collection in particular, and the place of contemporary art in our society.

Early in the project, UCBG staff was brought on board to offer advice and make sure that participating artists were completely clear on the parameters of the exhibit and what we were asking them to do. Above all, we asked that the plant collection be respected. More than respected–we asked the artists to explore the collection, interact with the staff, and create new site-specific work borne of those interactions.

This intersection of garden, science, and art has yielded provocative works of beauty, reflection, intrigue, and humor. The exhibit, in place through January 2013 and open to visitors during regular UCBG hours, has effectively garnered attention beyond the familiar garden/art community. You’re invited to join the discussion. 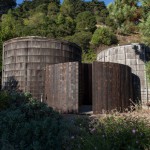 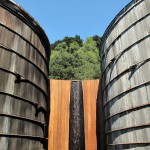 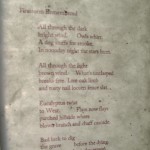 Human: Nature, 2012, a series of poems by Jane Flint are installed by benches in the geographic region of the garden that inspired them. Photo: Lorene Edwards Forkner 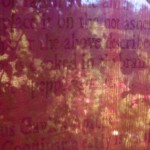 O Music of Eyes, 2012, by Deborah O’Grady, Shirley Watts, and Shane Myrbeck. A companion installation at the downtown Berkeley BART Station brings a piece of UCBG to the city in a wonderful piece of public art. Media: Photography, sound, and printed silk Photo: Deborah O’Grady 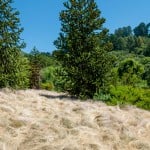 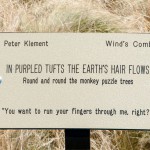 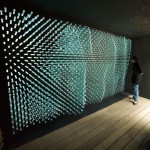 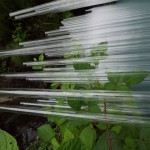 Sol Grotto is a contemporary take on Thoreau’s cabin made up of a small dark room with a spectacular wall perforated by glass tubes salvaged from the wreckage of the Solyndra Corporation. Photo: Ronald Rael 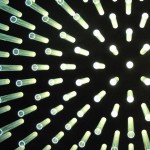 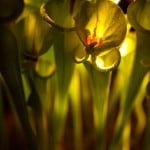 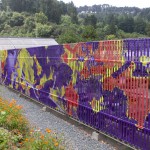 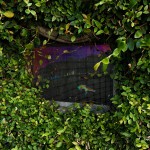 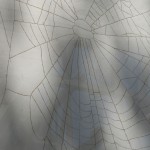 Gail Wight’s piece, Under the Influence, 2011, contains a series of delicate, burnt vellum drawings inspired by photos from a mid-20th century research project by Dr Peter Witt, of webs built by spiders under the influence of psychotropic drugs. The drawings are installed in the arid house which is home to many spiders and contains some of the plants used to produce the drugs in Witt’s study. Media: Burned vellum Photo: Lorene Edwards Forkner 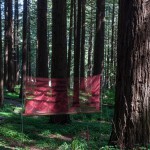 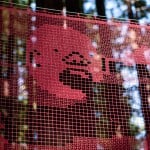 Nami Yamamoto Fog Catcher, 2012 The waxed, red linen thread used for the piece changes dramatically depending on the shifting light; a beautiful example of what happens when art is exposed in an ever-changing outdoor environment.