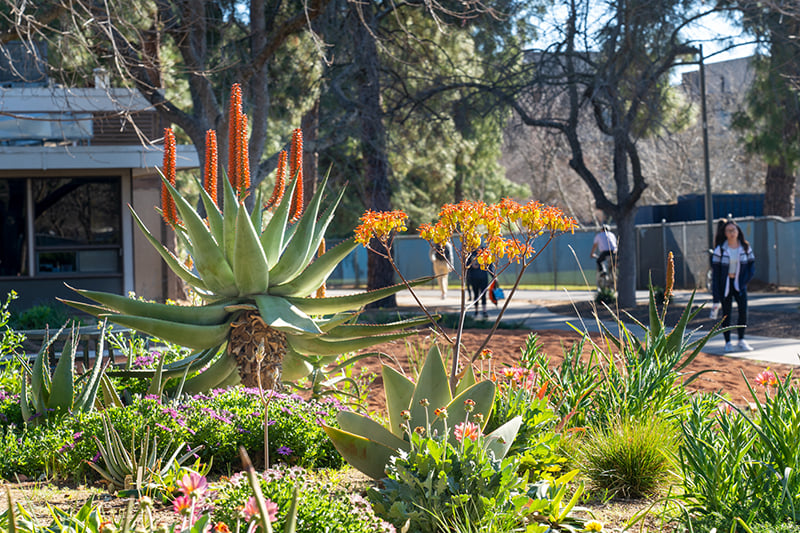 Like all great plants, aloes don’t need much and give a lot. They look beautiful year round, especially solitary plants with perfectly symmetrical rosettes, and they play well with others—from succulents to California natives to dry-climate perennials. Above all, I love aloes because most of them flower in the winter when little else does. Nothing adds cheer in the dull days of winter like a clump of aloes in bloom and the hummingbirds they attract.

I live in Davis, 15 miles west of downtown Sacramento, and plant friends from the Bay Area and beyond often seem surprised when they find out how many different aloe species I have and how well they grow. No, I’m not some wizard with particularly green thumbs, nor do I live in a particularly sheltered location. Any gardener in the Sacramento Valley can do what I do. This article shows how.

We can grow an enormous variety of spectacular plants in our region, including aloes. Many aloes are actually perfectly suited for our Mediterranean climate, especially those from winter rainfall areas, and a fair number tolerate our clay-rich soils.

Aloes are native to southern and eastern Africa, some islands in the Indian Ocean, and the Arabian Peninsula. Some occur naturally at high altitudes where they are regularly exposed to freezing temperatures, others are native to tropical areas where frost is nonexistent. Some mature to massive 40 plus foot trees, while others are barely three inches across. The variety is endless.

Taxonomically speaking, all aloe species used to be classified under one genus, Aloe. However, extensive DNA analysis has helped clarify evolutionary relationships and has led to far-reaching taxonomic changes. In 2013, researchers proposed splitting the genus Aloe into several separate genera, including Aloiampelos, Aloidendron, Aristaloe, Gonialoe, and Kumara. Here is a brief overview of what has changed:

While this comprehensive reorganization affects quite a few commonly grown species, most gardeners (and many nurseries) don’t pay attention to taxonomic developments. As a result, we’re likely to see these plants referred to (and labeled) as Aloe for the foreseeable future. 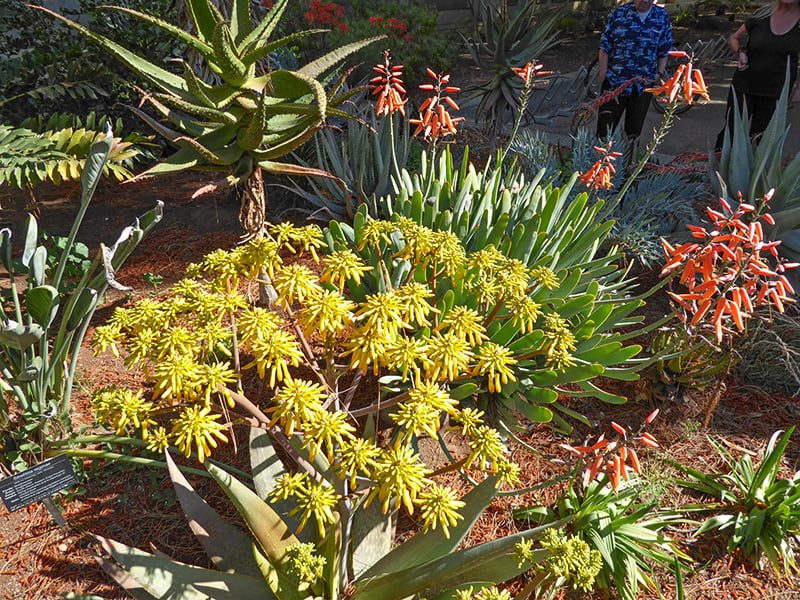 Aloe buhrii in full flower, with Kumara plicatilis behind it, on the UC Davis campus.

Gardeners in the Sacramento Valley are able to grow a wide variety of aloes since our winters are mild. The warmest spots, on the west side of the Valley and in the Sacramento–San Joaquin River Delta, can draw from almost the entire palette.

While very few aloes are hardy into the teens (Aloiampelos striatula and Aristaloe aristata are generally considered to be the toughest), many tolerate lows in the low and mid 20s. Brian Kemble, the curator of the world-renowned Ruth Bancroft Garden in Walnut Creek, has compiled a detailed list of hardy aloe species based on his 40 plus years of experience growing aloes. I consider it an essential resource. 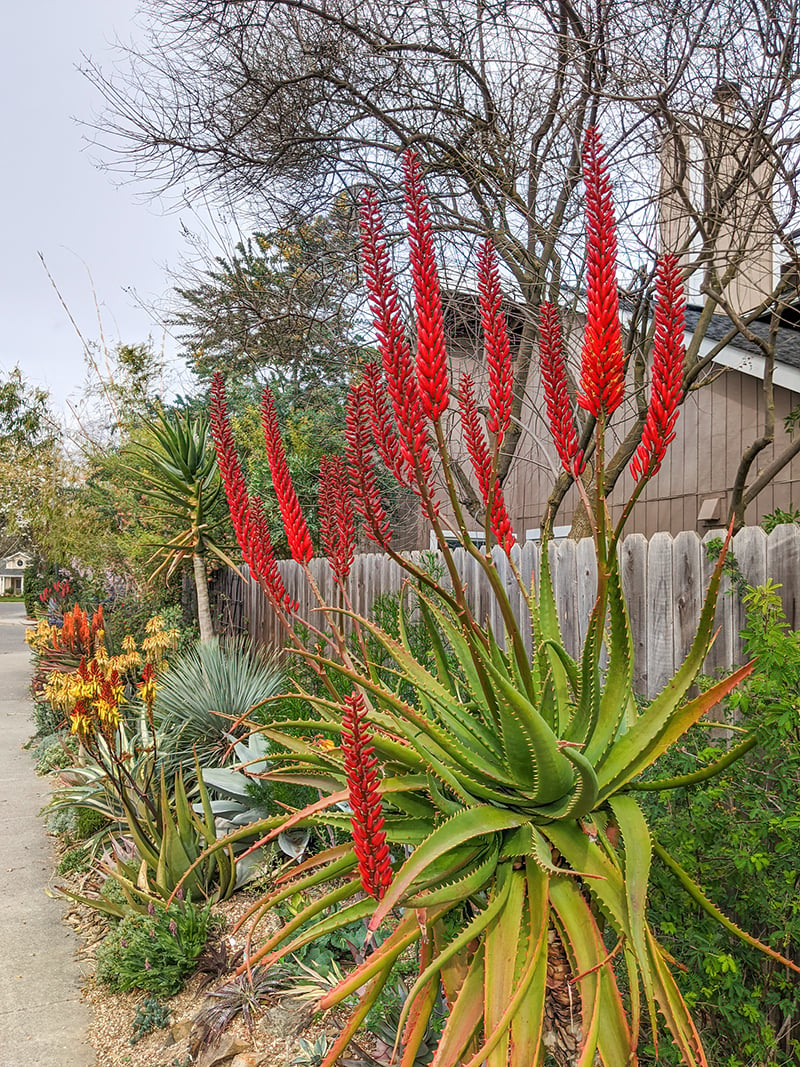 Aloe ‘Erik the Red’, one of the best tall aloes for the Sacramento Valley, in Gerhard’s garden.

Cultivation is about three things: soil, light, and water. Here are my recommendations based on years of experience growing aloes in Davis.

Soil: As undemanding as aloes generally are, they grow much better in soil that is porous and free-draining so excess water runs off quickly. Wet roots for any length of time, especially in cold weather, can lead to rot. If you garden in an area with heavy clay soil, you need to make some modifications for increased drainage; this Pacific Horticulture article on native plant care gives some great tips. I’m similarly afflicted, and my preferred approach is to create mounds of commercial topsoil mixed 1:1 with inorganic materials such as pumice, lava fines, or small gravel. This is much less work than trying to amend the native soil.

Light: Many people think that aloes need all-day sun to thrive. That may be true for species from the most arid regions, but a lot of aloes are quite adaptable. While no aloe will be happy in heavy shade, some (including Aloe maculata, Aloe greenii, and other spotted aloes) handle fairly shady northern exposures well and even flower there. As a rule of thumb, bright light is best, whether direct sun or light reflected by nearby structures. If in doubt, experiment—aloes take transplanting well, so it’s easy to move a plant that isn’t doing much.

Water: There’s a difference between how much water aloes need, how much they want, and how much I give them. Generally speaking, they need very little, but they’re happy with regular irrigation during their growing season. In my own garden, I water sparingly during our dry summers—less than aloes might want, but enough to keep them looking reasonably good. Every gardener has their own priorities, and for me conserving water is one. If in doubt, err on the side of underwatering.

Fertilizer: I didn’t list fertilizer among the three elements of cultivation because I don’t fertilize my aloes. I’m sure they’d love to be fed and pampered, but it’s really not necessary, especially where nutrient-holding clay soils are part of the mix. I’m a follower of the “tough love” school of gardening. 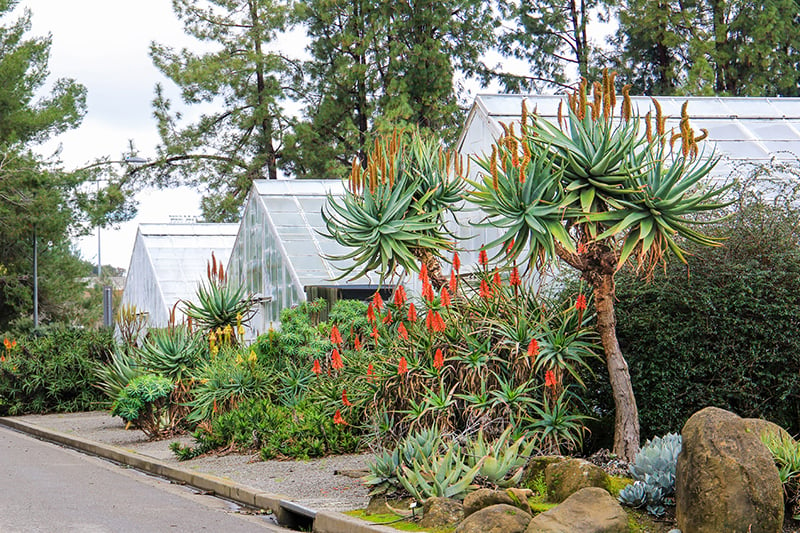 Aloe ferox hybrid, Aloe arborescens, and others in front of the greenhouses at the UC Davis Botanical Conservatory.

One of the best-known hybrids, Aloidendron ‘Hercules’, is hardier than its parents, Aloidendron dichtomum and Aloidendron barberae, and grows much faster. It’s a textbook example of hybrid vigor.

South African aloe breeder Leo Thamm, owner of Sunbird Aloes,  has introduced many hybrids with outstanding flower color. Unfortunately, only a few of them are available in the U.S., but I’m a big fan of those that are, including ‘Moonglow’, ‘Erik the Red’, and ‘Always Red’.

Another South African hybridizer, De Wet Plant Breeders (Andy De Wet and Quinton Bean), has given us the ‘Safari’ series: ‘Safari Sunrise’, ‘Safari Rose’, and ‘Safari Orange’. All of them cluster, grow quickly, are resistant to aloe mite, and flower for an extended period of time.

In addition, an ever-growing list of aloe enthusiasts are creating their own hybrids, many of them strikingly beautiful. Produced in very small quantities, these are only available from the growers themselves or at local plant sales. This is just one reason to check out events organized by local affiliates of the Cactus and Succulent Society of America. 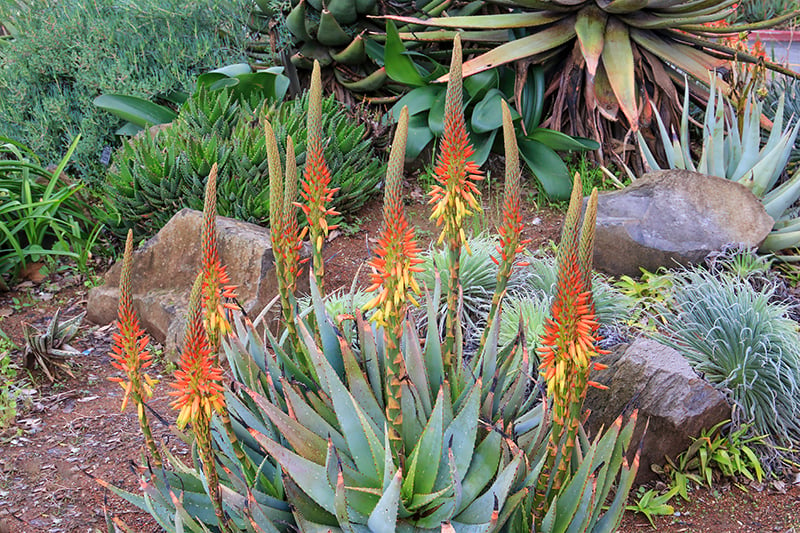 Aloe microstigma, a reliable, hardy and floriferous species, on the UC Davis campus.

As I mentioned earlier, the Sacramento Valley is blessed with a climate that allows us to grow dozens of aloe species in the ground. Unfortunately, many of them are hard to find. For this reason, my recommendations below take into account the selections you’re most likely to encounter in nurseries or from other sources.

Where available, each entry is linked to more detailed information in the Aloaceae Gallery on Agaveville, an outstanding xeric plant discussion forum. Next to each aloe you’ll see its approximate hardiness in cultivation (in °F), based on my personal experience, Brian Kemble’s hardiness list, and information on the excellent website of Santa Barbara-based San Marcos Growers. 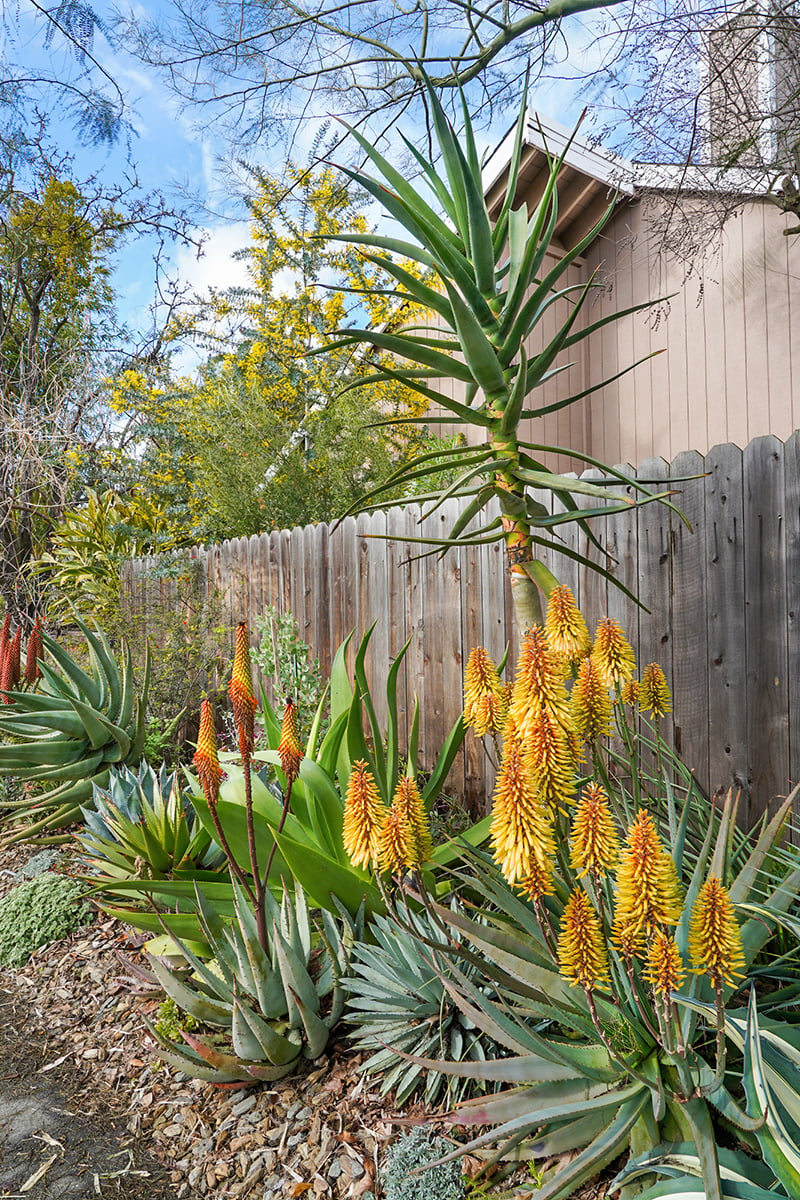 Not listed: Aloe vera. This may be the best-known aloe of them all, but it’s neither a particularly attractive plant nor a very hardy one (28-30°F). 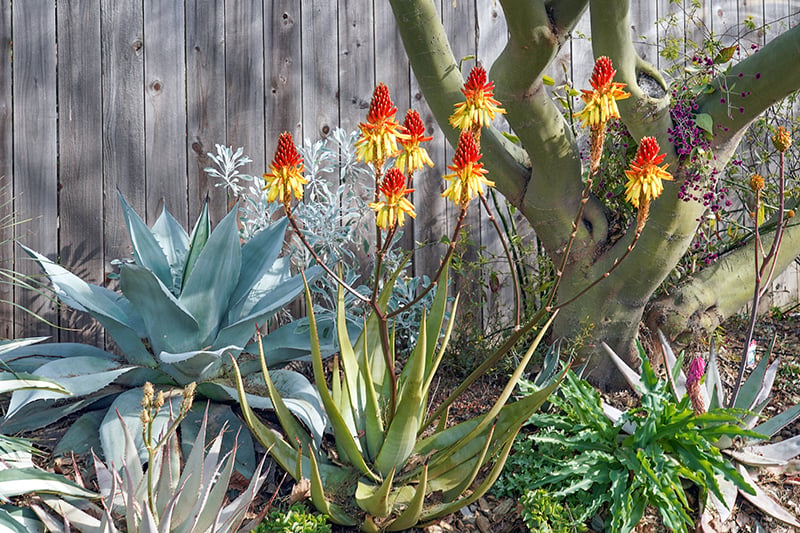 Aloe wicksensii, one of the best bicolored species for the Sacramento Valley, in Gerhard’s garden.

Where to see fabulous aloes

In the Sacramento Valley itself, the only public location that has aloe plantings of note is the UC Davis campus. The sidewalk beds in front of the Botanical Conservatory have mature specimens of Aloe microstigma, Aloe arborescens, Aloe littoralis, and Aloe ferox growing in unamended clay soil—in itself a testament to how tough they are. Thanks to the efforts of Ernesto Sandoval, manager and curator of the Botanical Conservatory, impressive plantings of many other species can be found in various other locations: on the south side of Storer Hall, in the alley between the Sciences Lab Building and Haring Hall, and next to the Sciences Lab Building. This blog post gives you an idea of what you can expect to see in late February.

The Ruth Bancroft Garden (RBG) may only be 3½ acres, but it’s packed with succulent treasures, including a world-class collection of aloes. The RBG’s curator, Brian Kemble, is an internationally recognized aloe expert and has been trialing countless species over the years. His findings are summarized in this hardiness list. In “normal” years, Brian leads aloe tours at the RBG; they’re not offered this year, but you can explore on your own. A monthly “What’s in Bloom” flyer available on the RBG website and at the entrance kiosk and “What’s in Bloom” videos on the RBG’s YouTube channel showcase garden highlights.

The UC Botanical Garden at Berkeley grows a wide variety of aloes in its Southern Africa Collection. This hillside area near the garden entrance not only has what are arguably the most spectacular specimens of fan aloe (Kumara plicatilis) in Northern California, but also offers panoramic views of the garden. The peak of the aloe bloom is late January.

Southern California has several aloe hotspots. The Desert Garden at the Huntington in San Marino near Pasadena has the best aloe displays in the U.S., maybe anywhere outside of Southern Africa. The highest density of flowering aloes can be seen from late December through late January but there are aloes in bloom almost year round.

Just a few miles from the Huntington, the Los Angeles County Arboretum and Botanic Garden has fewer aloes species, but it makes up for it with mass plantings of mature specimens, including the stunning Aloe vaombe. 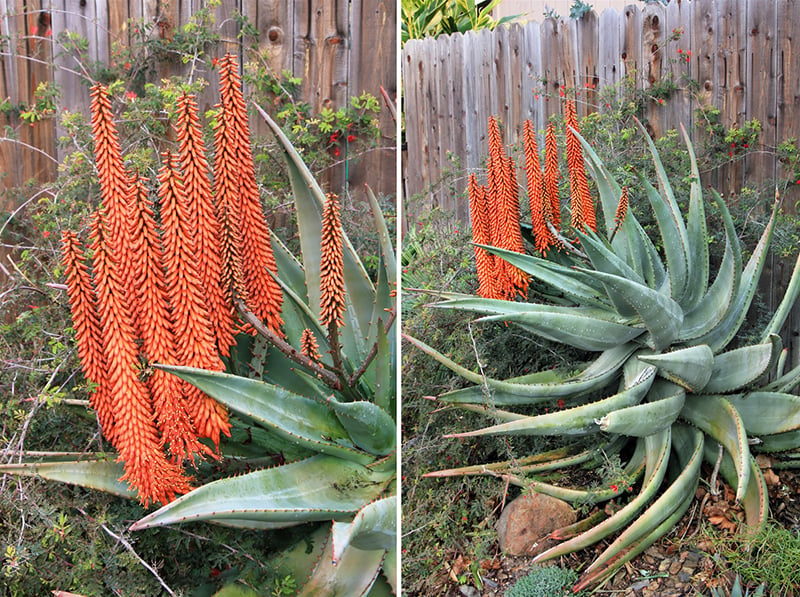 Beyond some colorful dwarf hybrids, Sacramento-area nurseries don’t offer a great selection of aloes suitable for landscaping. The best bet locally is the UC Davis Arboretum Teaching Nursery with its spring and fall plant sales; they took place online in 2020, and it’s unclear when in-person sales will resume. The UC Davis Botanical Conservatory sells unusual plants, including many aloe species and hybrids, at regular Arboretum plant sales and occasionally at its own events. Recommended nurseries in the greater Bay Area include the Ruth Bancroft Garden nursery, the UC Botanical Garden plant deck, the Dry Garden in Oakland, and Annie’s Annuals and Perennials in Richmond.

A major source of aloes, both common and uncommon, is the Institute for Aloe Studies (IAS) in Oakland, a labor-of-love venture of Bay Area aloe experts, including John Miller, who has one of the country’s most extensive private aloe collections, and Brian Kemble. In the IAS online store, you can find 120 plus aloe taxa (all species, no hybrids), including many rare ones not available anywhere else in the country. Not all of them are suitable as landscape plants in the Sacramento Valley, but they’re reasonably priced, so take the leap and try something new in your garden.

A big thank you to Ernesto Sandoval of the UC Davis Botanical Conservatory for his input.