Clivia species except for C. mirabilis are native to shady woodlands of summer rainfall areas of southern Africa, particularly South Africa. Clivia nobilis was brought to England and named after Lady Charlotte Clive, Duchess of Northumberland (1787-1866). It became a popular Victorian houseplant.

Like other amaryllids, clivia seeds are large and round. They are borne in large, colorful berries that ripen at least a year after the seed is set. Probably the trickiest phase of the clivia’s life cycle (for the gardener, anyway) is during germination. Seeds need to rest on, or be lightly pressed into, the seed germination medium. Rot is also the greatest threat to germinating seeds and young seedlings. Keep the medium moist but not soggy.

Seedlings are sturdy and, given good growing conditions and genetics, they are vigorous. Clivia miniata reaches blooming size in about five years, depending on culture. Once plants have about a dozen leaves they will flower. Blooms increase in number and size after the first year.

– All clivia species have rare but naturally occurring yellow-flowered plants in the wild.

– The most recently discovered clivia (2001), Clivia mirabilis, evolved the earliest.

– The alkaloids in clivias that make them unattractive to predators are valued for their medicinal qualities by native South Africans. They are chopped up and sold in local markets as medicine, known as muti.

– Transverse and striata variegation are inherited only from the pod parent (mother plant).

—Marilyn Paskert is a clivia hobbyist in the Bay Area

Marilyn Paskert, a clivia hobbyist in the San Francisco Bay Area says that growing clivias outside on the West Coast presents a few challenges. “All clivia species except C. mirabilis evolved in areas in South Africa with very low winter rainfall.  Lucky Southern California growers can grow their plants outside in shade. In the Bay Area, sturdy orange-flowered Belgian hybrids are very happy planted outside in shade, in well-drained ground. Variegated clivias, peach, and some yellows are more prone to rot and do better with protection from rain or overhead watering. Clivias like frost-free shade, slightly acid well draining soil and a balanced fertilizer from February through September.”

Indoor clivias appreciate bright indirect light, but are known to tolerate conditions that are too dark for most houseplants. Without adequate light, though, they might not bloom. Potted clivias grown outdoors can be moved into the house for winter, or into an unheated basement or garage. Clivias do not tolerate frost, but will survive temperatures near freezing. They can be moved back outdoors to a shady spot in the spring when temperatures warm up.

Potted clivias flower best with a dormant/rest period of a month or two with nighttime temperatures below 50 degrees. Depending on your climate, starting this rest period in November will induce flowering in late winter. During the winter rest period, water infrequently (just enough to prevent wilting) and do not fertilize. Indoor gardeners can place clivias in an unheated garage, spare room, or basement for the rest period. While some clivias may bloom without this chill, flowering will be enhanced by the cooler temperatures.

Clivias in containers enjoy being pot-bound, and will flower and produce offsets more readily if their roots are somewhat confined. Sharp drainage is essential, so pots should always have drainage holes. Don’t let them stand in water. Repot into only slightly larger pots every few years.

Use porous potting mixes that are high in organic material content and slightly acidic—some growers use an orchid or cactus mix. Commercial potting soil is fine, so long as plants are not overwatered. Occasionally, mealybugs or scale insects can be a problem on indoor plants. As with all plants, pests are less frequent under ideas growing conditions.

This growing information applies to Clivia miniata; some species and interspecifics may have slightly different requirements. 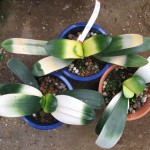 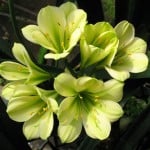 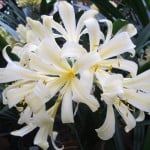 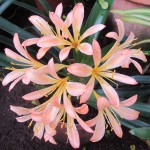 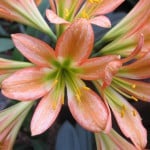 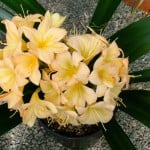 A peach clivia grown from seed in the author’s greenhouse. Photo: Mary Gutierrez 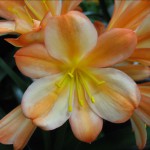 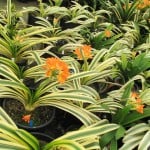 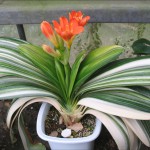 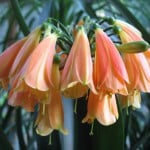 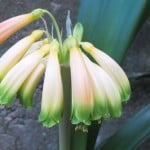 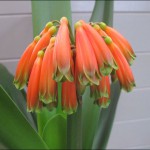 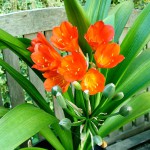 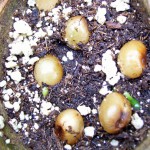 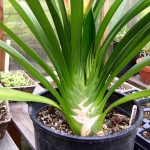 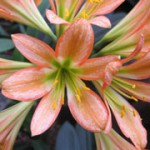 Clivias, by Harold Koopowitz, Timber Press, 2002
(Out of print, but copies are available online)

The NACS website has links to clivia information and sources from around the world. It is an excellent starting point for anyone interested in the genus Clivia. Learn about clivia’s journey from South Africa to the rest of the world and where it is grown now. Some international sources will ship seed to the United States; recipients need a USDA small lots of seed permit.

Selected 2013 events on the Clivia Calendar