Ferns are among Earth’s oldest plants, tracing back before the time of the dinosaurs (300 million years ago). They appear in fossil records well before the flowering plants that have come to dominate our planet and they populate nearly every ecosystem on Earth. The world of ferns is a vast and expansive one, and this article will focus on an interesting subset of ferns—those native to the state of California. Here are ten California native ferns worth a closer look.

The western sword fern isn’t simply the best known native fern, it is the most widely used in California gardens, and for good reason. It is one of the most durable of all native ferns, thriving in shade but also able to prosper in a surprising amount of sun. It appreciates regular water but is quite drought tolerant. One of the larger native ferns, it can reach up to four feet tall and wide. It produces upward-facing, dark-green fronds in a tight clump, spreading out radially from a round base. Fronds are single pinnate (leaflets on opposite sides of the central axis), with the one- to six-inch-long pinnae alternating on the stalk. These pinnae have a small upward-pointing lobe at the base (a sword hilt, hence the fern’s common name) and the edges are serrated, with bristly tips. Individual fronds live for about two years and remain attached to the rhizome after withering. This widespread fern is often found as an understory plant in moist, low-elevation coniferous woodlands. It prefers well-drained, acidic soil composed of rich humus. Hardy in USDA Zones 3 to10. 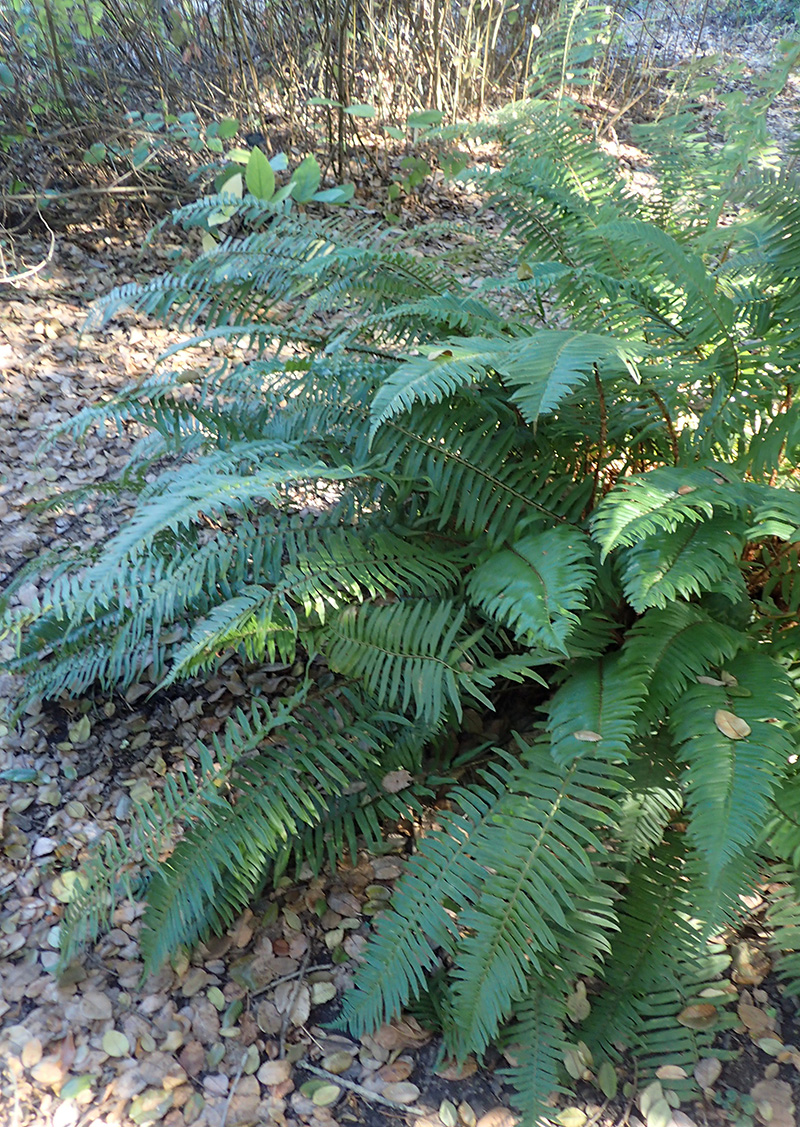 This popular fern is particularly distinctive because of its two differing types of fronds. The sterile fronds, eight to 24 inches long, are pinnatifid (pinnately divided but not down to the axis), stiff and leathery, forming a loose, flattened and spreading rosette. Fertile fronds form a vertical fountain in the center of this rosette, similar in their dark green color but 16-24 inches tall, with much thinner and more widely separated leaflets. Fertile fronds wither by summer’s end, leaving the evergreen sterile rosette. Leaf stalks are a dark purplish-brown and grow from a short, thick rhizome. This species is found in moist forests and along stream banks. In the garden, this hardy fern is ideally used in a shady location with regular moisture summer through fall. Prune off spent fertile fronds for best appearance. The common name is thought to owe to this species providing winter nourishment for deer. Hardy in USDA Zones 5 to10. 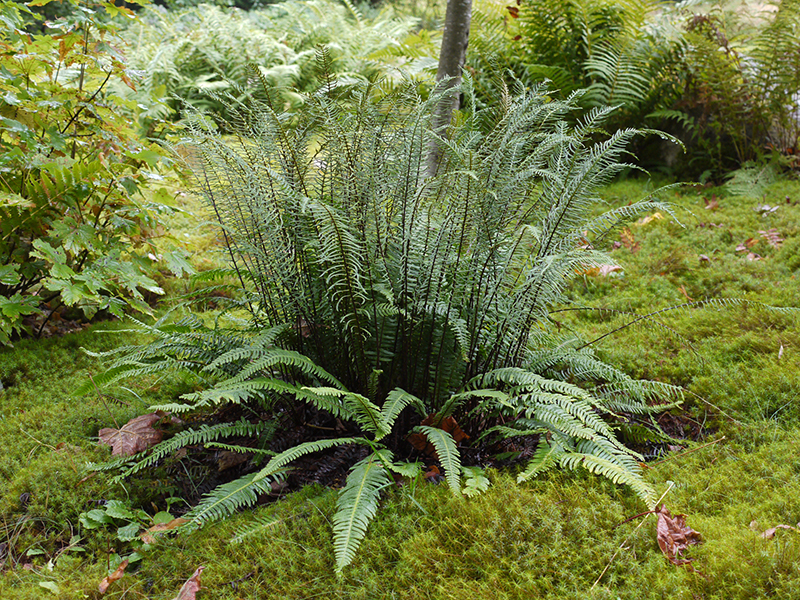 The western chain fern is the largest American fern and is found not only in California but also along the western half of Oregon, Washington, and British Columbia. Its population extends south to Baja California as well as east to Nevada and Arizona. It features lush, moss-green fronds, three to five feet tall, and an attractive vase-like shape. This evergreen fern is related to the above Struthiopteris fern species, both being members of the Blechnaceae family. Its sori (spore-producing receptacles) are short but broad and are arranged in neat lines (known as chains), a characteristic that lends this fern its common name. The chain shape is visible on both sides of each leaflet. It is happiest in part shade but can tough it out in darker conditions and even thrive in somewhat sunny areas within the fog belt. Although it likes regular moisture, it does not want to be kept wet. Cut to the ground in late winter just before the new fiddleheads begin to emerge. This is a great choice as a foliage focal point in a shady bed or where one desires a dramatic fern. Hardy in USDA Zones 8 to10. 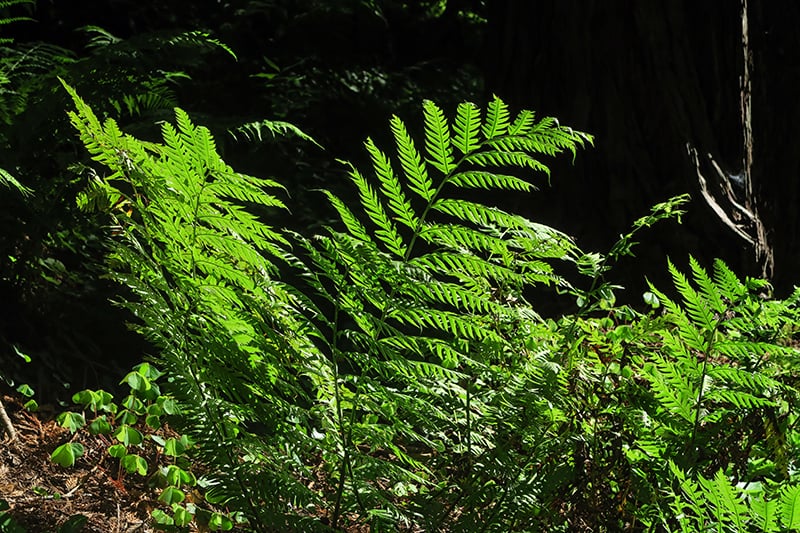 Woodwardia fimbriata, the chain fern, has sori in chains on the bottom of the leaf. John Rusk CC BY-SA 2.0

Five finger maidenhair is one of the prettiest and most delicate of all native ferns. It is closely related to the popular maidenhair fern, both being species of the genus Adiantum. This tough but often deciduous fern can get to 30 inches tall and wide. Purplish-black wiry petioles (stalks holding leaflets) divide, then divide again, spreading in radial parallels to the ground to form six to ten “fingers.”  The sori are found on the edges of the upper lobes of the leaflets. In the wild, five finger maidenhair grows in shady, humid forests or on rocks and cliffs along the West Coast, as well as in a few areas of the inland Rocky Mountain region. Durable and prolific, it often grows in large colonies. This maidenhair fern is versatile, colonizing when planted in the ground but also prospering even when root-bound in containers. It is ideal for a moist shady bed or when used as an understory planting around rhododendrons, azaleas, and hydrangeas. It is disease free and deer resistant. Hardy in USDA Zones 3 to10. 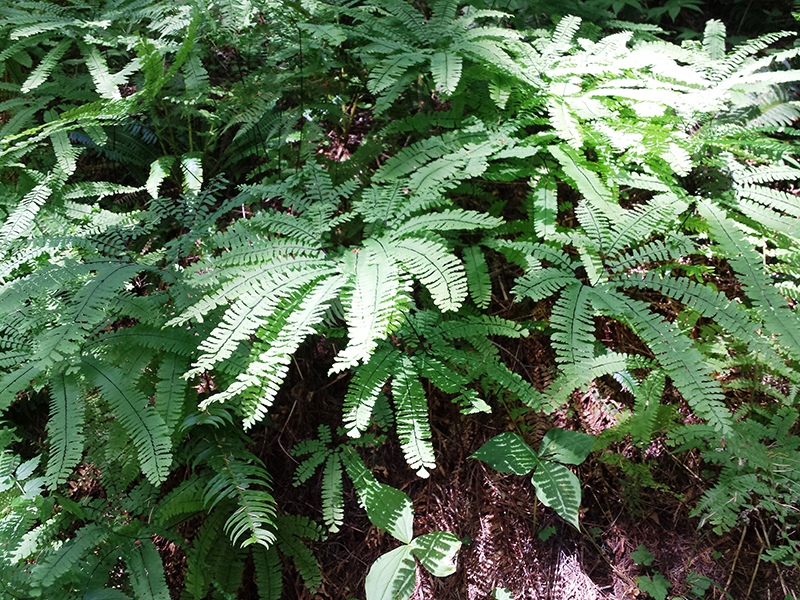 Adiantum aleuticum is one of the prettiest and most delicate ferns. Brewbooks CC BY-SA 2.0

Like many of the California native ferns discussed here, the maidenhair isn’t endemic to California. It is found throughout the world in tropical to temperate regions, including South America, Europe, Asia, and Africa. It shares many of the same characteristics of its relative, the five finger maidenhair, the main differences being that it is smaller (to 18 inches) and its fronds are unforked. The genus name derives from the Greek word adiantos, meaning unwetted, in reference to its water-repellent foliage. Its hypenated species name combines the Latin capillus, meaning hair, and veneris, of Venus, leading to its other common name, Venus maidenhair fern. This clumping, deciduous fern is found in temperate rain forests, shrub and woodlands, broad-leaf and coniferous forests, and on desert cliff seeps. Its preferred habitat is moist, well-drained sand, loam, or limestone. This fern is most attractive planted in drifts in shady or sheltered beds, but can also be grown as a houseplant. Hardy in USDA Zones 5 to10. 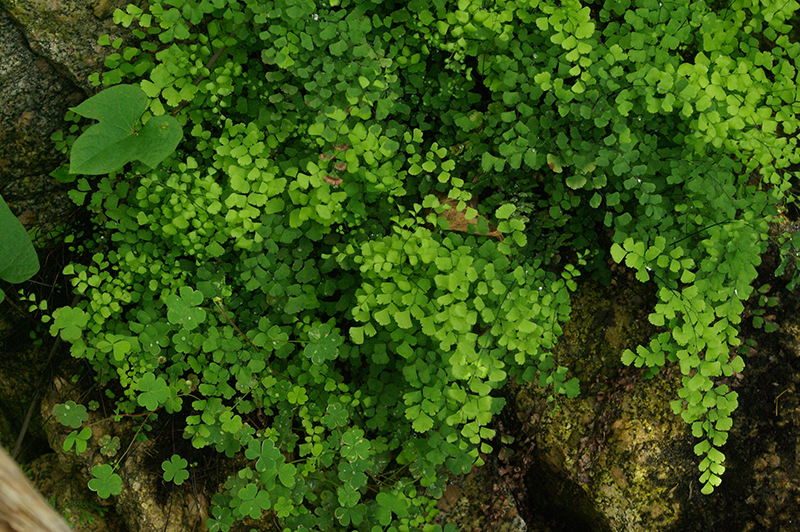 The common lady fern is one of the most widespread ferns in California, and is found throughout most of temperate North America. It forms vigorous clumps of feathery, light-green fronds, two to three feet tall. These fronds are densely packed, as they arise from a central point and not along rhizomes as is the case with many ferns. The common name arises in part from the fern’s elegant and graceful appearance. Its similar common name, female fern, refers to how its reproductive structures (sori) are concealed under a membranous indusia on the undersides of the fronds. The compound leaves of the common lady fern resemble those of several wood ferns (Dryopertis), with the fronds on the lady fern being wider and also deciduous. This fern is a popular choice where a beautiful, ornamental fern is desired. It prefers moist but well-drained, humus-rich environments and partial to full shade. Hardy in USDA Zones 4 to10. 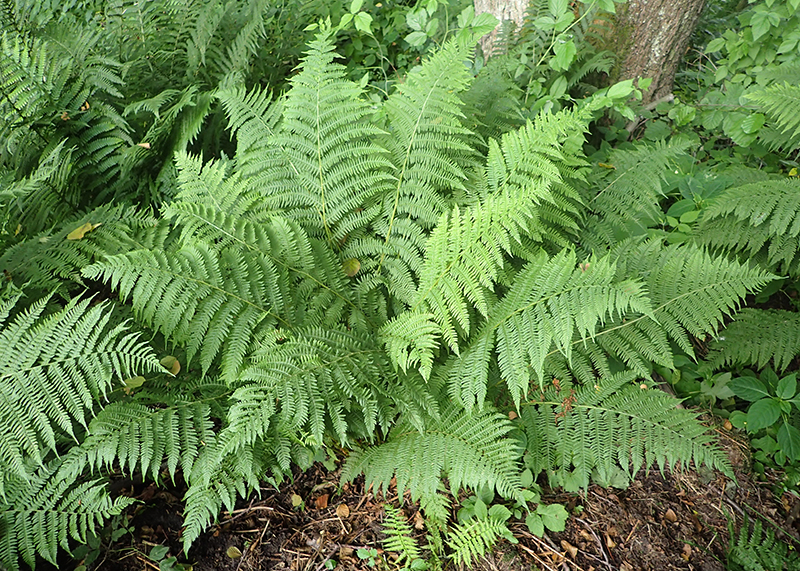 The spreading wood fern is found in temperate and subarctic regions of the Northern Hemisphere. It prefers cool, moist, mixed or evergreen forests and rock crevices on alpine slopes, often growing on rotting logs or on rocky slopes. It is characteristically riparian in nature and is especially associated with stream banks. This fern features a woody stalk, which can be ascending or creeping, and green lacy fronds. These deciduous fronds are 12 to 24 inches long, lanceolate to triangular in outline, with the sori occurring medially on the underside of the pinnae. This lovely fern’s species name (from the Latin expando) describes its tendency to spread out, to expand. Other common names include northern wood fern, arching wood fern, spiny wood fern, and crested wood fern. It is happiest in cool and moist shade, one reason it is most commonly found at higher elevations. Hardy in USDA Zones 3 to10. 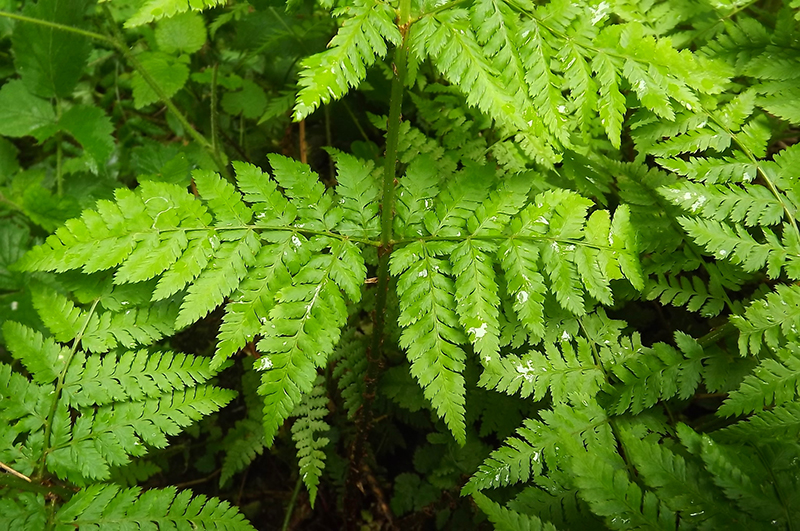 Although we naturally think of ferns as ground dwellers, the leather fern is also found growing in trees in its natural environment, in moist coastal forests from southern British Columbia down to central California. Whether growing on gnarled branches of ancient redwoods or on the forest floor, its deeply-lobed, rounded evergreen fronds make it one of the most distinctive and beautiful ferns for the garden. Leathery, deep-green leaves feature rusty-orange, circular sporangia on the undersides. It spreads slowly by way of creeping rhizomes, topping out at a modest six to ten inches tall and eighteen inches wide. It is a choice selection for planting around rocks, between narrow openings, on logs, even on rooftops. Its modest size makes it ideal for containers and it is even suited for a hanging basket. It prefers humus-rich, well-drained soil and a somewhat moist shady location. Hardy in USDA Zones 8 to10. 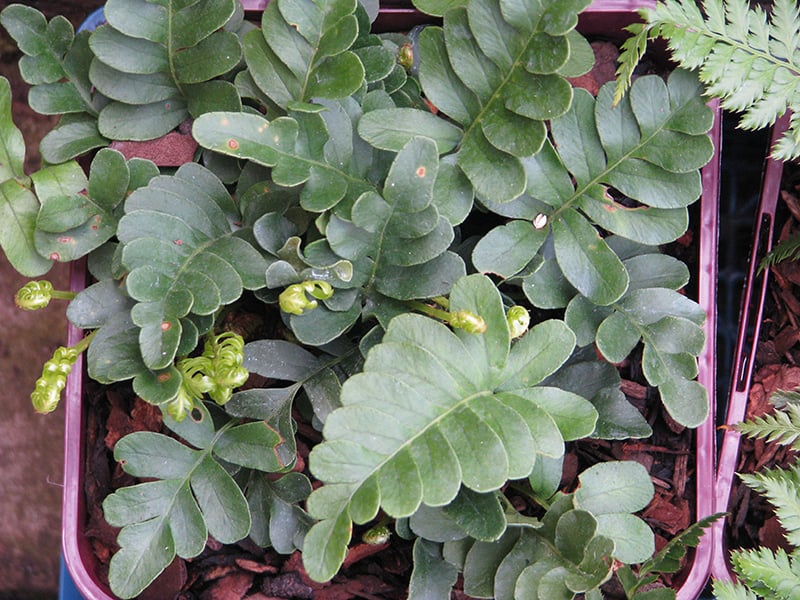 This unusual native fern will make you forget everything you know about ferns. Lacy? Nope. Full and lush? Not a chance. Needs the shade? No. This unusual fern likes dry, sunny, even hot locations. Planted in full sun, bird’s foot fern tolerates extremes in temperature, everything from below freezing to 110 °F. It is native to much of California, as well as parts of Oregon, Nevada, and Arizona, where it grows in a variety of rocky habitats. It is composed of a thin, straight, brown rachis (stem) lined with widely spaced leaflets. The leaflets are divided into small narrow terminal segments. Sporangia are located under the leaf edges. This is a great choice for a hot, dry slope or for adding interest to a sunny rock garden. It tops out at a foot tall and wide. Curiously, the deciduous fronds are edible. Hardy in USDA Zones 6 to10. 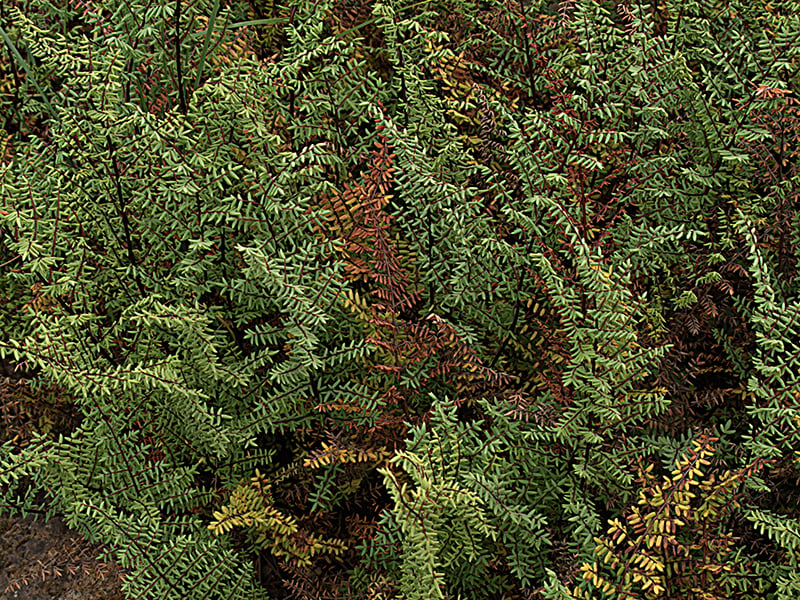 Pellaea mucronata is remarkable in its tolerance of direct sun. John Rusk CC BY 2.0

This handsome and distinctive native fern has leaflets made up of rounded segments, with all surfaces covered in long pale hairs. The preponderance of hairs gives this vertical fern a distinctively woolly appearance. On the underside of each leaf, the sporangia may be buried beneath a coating of these same hairs. Wiry black stems provide a pleasing contrast. It is found on cliffs and ledges on a variety of substrates, including limestone and granite, in the southwestern United States, California, and Baja California. It spreads slowly by rhizome and tops out at six to ten inches tall. A versatile fern, it can deal with sun or shade, as long as it gets very good drainage. Evergreen in USDA Zones 9 and higher. Hardy in USDA Zones 9a to10b. 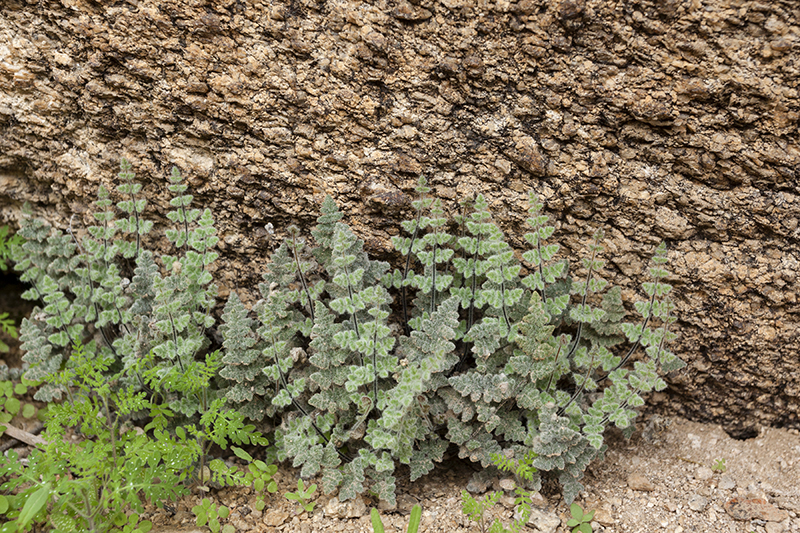 Myriopteris parryi is unusual in having hairs that give it a wooly appearance. Patrick Alexander CC0

A fern for every occasion

As you can see, even limiting oneself to California native ferns means having a variety to choose from: large or small, vertical or creeping, for sun or shade, and with appearances that range from lacy to lush to woolly. Impress your friends with your horticultural mastery and try growing a native fern.