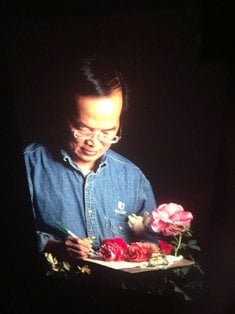 Ping Lim is an award-winning rose breeder that earned recognition for his work with roses not only within the horticultural world but in American culture at large. While Ping has bred many notable rose cultivars throughout his career, Macy’s was so impressed by Ping’s line of twenty-five new roses named Easy Elegance, that they selected the cultivar Macy’s Pride to symbolize their centennial anniversary. Additionally, Ping has been honored with prestigious awards from All American Rose Selections, Portland’s Best Roses, and rose competitions in Northern Ireland and Japan.

Ping Lim was born in Laos, educated in Taiwan, and moved to the US where he became the Rose Research Director for Bailey Nurseries, leading an award-winning Oregon-based rose breeding program. After a downward shift in the economy, Ping decided to launch his own business, Roses by Ping, where he continued to focus on producing beautiful, disease-resistant, easy care, fragrant roses. While now running his own business, Ping also writes a column for the Portland China Times and has written international books, as well, including Rose Village in China, A Life with Roses, and Selecting a Rose’s Parents, for the Rose Hybridizers Association handbook here in the US.”

To learn more about his extensive background with roses, which spans continents and horticultural traditions, sign up for his presentation at Quarryhill Botanical Garden.  Hurry, space is limited.