Kristl Walek of Garden North, Seeds for the World 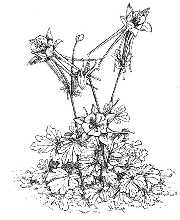 The reknowned plantswoman Kristl Walek, based in Nova Scotia, will talk on the subject matter of her anticipated book on native plants of Eastern Canada.  In 1992 Kristl starte Gardens North as a humble, small dining-room operation with the seed of plants from her own backyard. Since then the business has grown to international proportions; as of 2012 sales are in over 40 countries and still growing. A large proportion of the seed she sells is wild collected.  Kristl is one of the leading experts on seed germination and has written and lectured on the topic to many international organizations. She contributed to Norm Deno’s Seed Germination and Theory and in 1998 was the 1st recipient of the NARGS Geoffrey Charlesworth writing prize for her article on seed collecting, cleaning and storage.

A program of the Vancouver Island Rock and Alpine Garden Society.