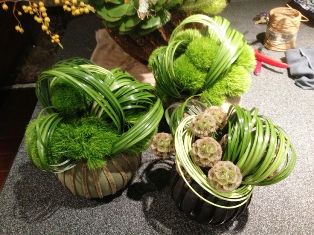 Join us at San Jose’s Mt. Eden Floral to enjoy Emil Yanos presenting his “Inspirations” that cover his most inspirational topics.  Originally from Honolulu, Hawaii, Emil Yanos now lives in Napa, California. He began his floral career in 1998, following a successful career in graphic design. Emil also expresses his creativity as a ceramic artist.

Emil earned his accreditation in 2003 from AIFD. He served on the AIFD North West Region board from 2008. The following year he was elected to board Treasurer and served for two terms. Emil was elected AIFD Northwest President in 2011, where his goal was to bring more public awareness to the organization. He is serving again as the North West region’s Treasurer.  Working with the San Francisco Garden Club, he has donated his time to create pieces that have been used to raise funds for various educational programs.