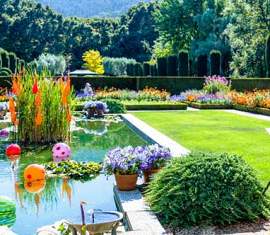 In honor of the year of the Garden, Filoli will be featuring a series of garden lectures to inspire a deeper appreciation of the incredible gem in our own backyard.  We tell the stories about the decorative pieces in the House, and the plants in the Garden. But what are the stories behind the hardscape and decorative components such as the faces on the Garden House, or the fountains, bricks, and gates in the Garden?

Learn more about these exquisite pieces, including the mine that supplied the marble and the factory that made the ceramics, in this informative lecture presented by Filoli’s own head of the Garden.  Jim Salyards has been Filoli’s Head of Horticulture since 2014, and part of the horticulture department since 1995. He received his B.S. and M.S. degrees in Plant Science / Horticulture from U.C. Davis. His botanical interests include California native plants, mycology and woody plant (cuttings) propagation.     Refreshments in the service courtyard from 5:00 pm to 6:00 pm. Lecture begins at 6:00 pm in the Visitor and Education Center.