Collecting New and Hardy Plants in the Mountains of Northern Vietnam 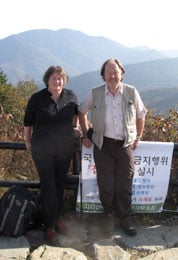 Collecting New and Hardy Plants in the Mountains of Northern Vietnam

Plant explorers Bleddyn and Sue Wynn-Jones will talk about their plant-collecting expeditions in the north of Vietnam. They have explored that region’s mountainous forests seven times since 1999, discovering new species and other exciting plants—“exciting sometimes to the extreme,” they report.

The main emphasis will be on the plant diversity of the area, including relic populations unique to it and its many endemic plants. Bleddyn and Sue will also discuss some of the region’s rich culture, which includes more than thirty indigenous hill tribes.

The talk is presented by the Garden Conservancy and the University of California Botanical Garden at Berkeley.

Note to our readers in the Pacific Northwest: the Wynn-Joneses will also be presenting several talks in the region in late October. See list below.

About the speakers: Sue and Bleddyn Wynn-Jones spend up to three months every year on plant hunting expeditions to remote corners of Asia, the Americas, and, of late, Europe. Their collections are much sought after around the world and in their nursery in North Wales, Crûg Farm Plants, has become a mecca for keen gardeners. They provide plants to many prestigious clients, including the Queen herself.

Crûg Farm has an outstanding and unrivaled selection of plants, many of which have not been cultivated in the West before. The nursery specializes in unusual herbaceous perennials, climbers, and shrubs. Many of the plants are propagated from seed and plant collections gathered by the Wynn-Joneses on their plant explorations. www.crug-farm.co.uk

You may also register by calling the Garden Conservancy’s New York office at 845.424.6500.